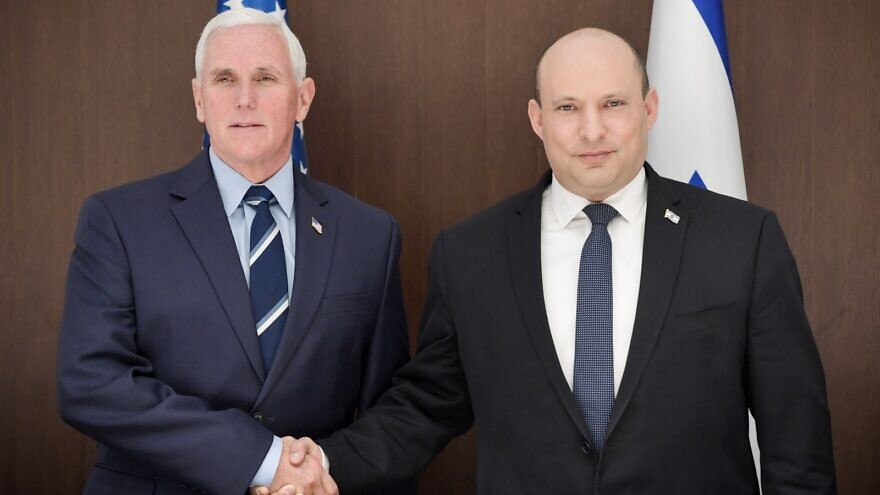 The two discussed the nuclear agreement with Iran taking shape in Vienna and its implications, as well as the situation in Ukraine, according to a statement from Bennett’s office.

Pence landed in Israel on Monday for a short visit, following which he is scheduled to travel to Morocco.

In an interview with Israeli daily Israel Hayom, part of which was published on Monday, the former vice president was harshly critical of both Russian President Vladimir Putin and the Biden administration.

“I must tell you that as the travesty unfolds on the landscape of Ukraine, it is just unconscionable that the American administration is at the same time negotiating at the side of the Russians to restart the Iranian nuclear deal,” said Pence.

Reviving the 2015 deal would be bad even in peacetime, but “to literally be working with the Russians” despite Putin’s invasion of Ukraine “to achieve once again some deeply flawed and dangerous agreement with the ayatollahs in Iran is just utterly unacceptable.”

The United States, he said, “should not be working with Russia to ease sanctions or in any way put Iran back among the community of nations.”

“Putin must stop or Putin must pay,” he said. “We need to focus the world’s energy on ending the Ukrainian invasion and continuing to put pressure to bear until the Russian troops are out of Ukraine.”