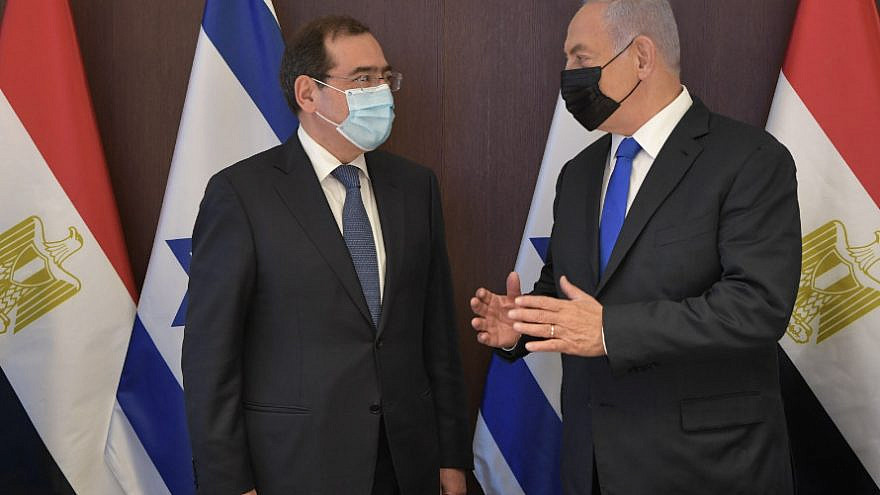 “This is an important day, marking our continued cooperation on energy and so many other things,” said Netanyahu at the start of the meeting, according to the Prime Minister’s Office.

“There is a new era of peace and prosperity for the region with the Abraham Accords,” he continued, adding, “This began of course with the historic peace treaty between Egypt and Israel, but now it is becoming something that can better the lives of all the people in economic terms and we think that this is a great opportunity for regional cooperation among Egypt, Israel and the other countries.”

“We are an energy hub,” said Netanyahu. “Together, we can supply not only our own needs but the needs of many other countries. So it is in this spirit of friendship and cooperation and peace and prosperity that I welcome you to Israel.”

Addressing Netanyahu as “Excellency,” Molla thanked the Israeli premier for the invitation.

“Together with Minister Steinitz, we started together a few years back the expansion of the cooperation in energy that was enhanced by the foundation of the East Mediterranean Gas Forum. I am looking forward to our discussions,” said Molla.

Steinitz said that Molla’s visit was of “historic importance, given that the establishment of the regional gas forum and the export of natural gas to Egypt symbolize the most significant economic cooperation between Egypt and Israel since the peace agreements were signed almost 42 years ago.”

Molla’s arrival in Israel follows last week’s visit to the country of Cypriot President Nicos Anastasiades and that of Greek Prime Minister Kyriakos Mitsotakis earlier in the month, during which regional energy cooperation was among the topics discussed.

Later on Sunday, while touring Israel’s coastline to inspect the damage from large quantities of toxic tar that began washing up on the shore over the weekend, Netanyahu said that he and Molla had proposed that “every ship that you see here be powered by natural gas instead of polluting fuel, as happened here.”

“I think that if several countries band together, within a few years we can bring about a great change so that the sea, country and beaches will be clean,” added the prime minister.

Israeli authorities, including Environmental Protection Minister Gamliel, say the tar likely originated due to a spill from a single ship after it was wracked last week by stormy weather.