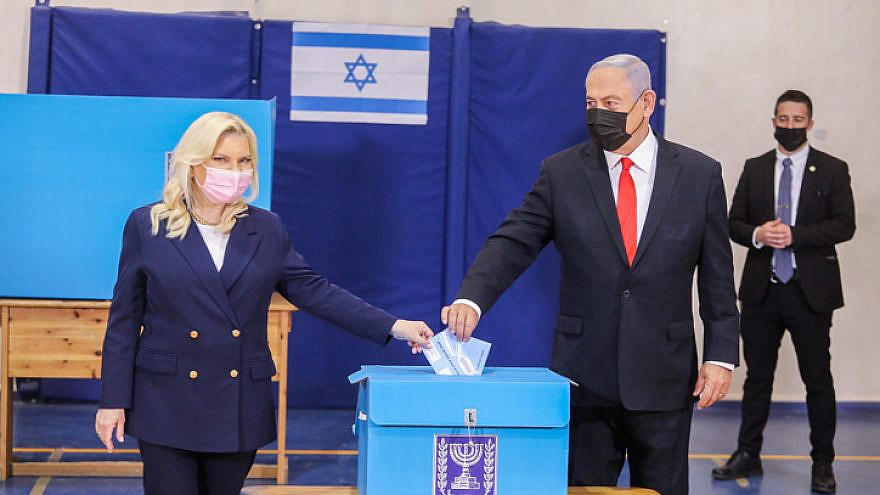 Israeli Prime Minister and head of the Likud Party Benjamin Netanyahu casts his vote in the fourth elections in two years, together with his wife, Sara Netanyahu, at a voting station in Jerusalem, on March 23, 2021. Photo by Marc Israel Sellem/POOL.
Republish this article
718 WORDS
Spread the word.
Help JNS grow!
Share now:

(March 23, 2021 / JNS) Initial exit polls from Israel’s national election on Tuesday indicate that Israeli Prime Minister Benjamin Netanyahu, along with support from his right-wing bloc—if the Yamina Party is included—would have a narrow Knesset majority, giving the Israeli leader an unprecedented sixth term in office.

Exit polls show Netanyahu’s Likud winning 31 to 33 seats, with his wider right-wing bloc of around 53 to 54 seats. While this is short of the 61-seats needed for a Knesset majority, if Naftali Bennett, a rival right-winger whose party is predicted to gain seven or eight seats, joins the government, then Netanyahu would have a slim majority.

Yair Lapid, Netanyahu’s main challenger on the center-left, gained about 16 to 18 seats making his Yesh Atid Party the second largest in the Knesset, but well behind Likud and with no realistic path to a majority, especially given the wide ideological spectrum of the smaller parties in the Knesset.

Netanyahu declared his victory on Twitter, thanking Israelis for their support again.

“It is clear that the overwhelming majority of the citizens of Israel are right-wingers, and they want a strong and stable right-wing government that will safeguard the economy of Israel, the security of Israel and the land of Israel,” he said. “This is what we will do.”

According to Israel’s Channel 11 exit poll, the Netanyahu right-wing bloc has 54 seats with Naftali Bennett’s Yamina pushing them up to 61 seats.

Israel’s Channel 12 also shows Likud at the top with 31 seats, followed by Yesh Atid with 18.

Similarly, Israel’s Channel 13 has Likud at the top with a right-wing bloc at 54 seats, boosted to 61 with Yamina.

Like many of Netanyahu’s opponents in the election, Bennett has had a troubled relationship with Netanyahu and recently sat out of the Likud-Blue and White coalition government.

Despite the important role of Yamina could play, the party had a poor showing in the election. Similarly, another right-wing challenger, Gideon Sa’ar of New Hope, also faired poorly.

Early polls after the election announced both parties polling high in double digits as the top parties behind Likud.

Another major result from the polls was the poor showing of the Arab parties. In the last election, the Joint Arab List had 15 seats. But ahead of the election, the Ra’am Party broke away from the Joint List and ran on its own; it appears not to be crossing the threshold, thereby reducing Arab party presence in the next Knesset.

Also of note was the strong showing of the far-right Religious Zionism Party. It had been the subject of controversy during the election due to the inclusion of the Otzma Yehudit Party. By not only crossing the threshold but still gaining a possible six or seven seats, the party will now command a stronger position within a Likud-led coalition.

The other side has also proven stronger than expected in terms of the Blue and White Party and smaller left-wing parties, including Labor and Meretz. The Labor Party had all been left as dead politically, with some initial predictions that the former party of David Ben-Gurion and Yitzhak Rabin would fail to cross the threshold. It appears that its new leader, Merav Michaeli, has boosted its performance, though it still remains a minor party overall.

Meanwhile, it was predicted that Defense Minister Benny Gantz and his Blue and White Party would not cross the threshold, especially after several major defections ahead of the election. It appears that Gantz will indeed be returning to the Knesset, but unlikely to rejoin a Netanyahu-led coalition after a bitter experience in government between the two.