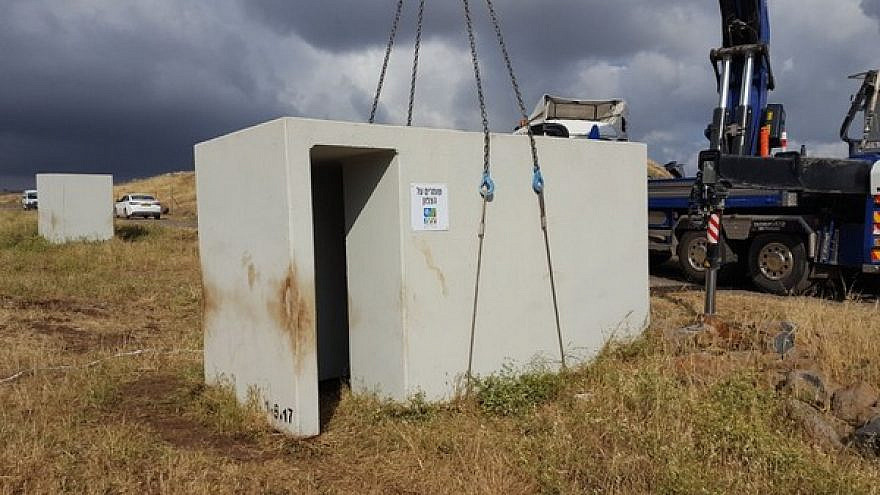 (May 20, 2021 / JNS) Amid the intense rocket barrages of recent days, the International Christian Embassy Jerusalem is pressing ahead with orders for 15 new portable bomb shelters—nine to be delivered as soon as possible to vulnerable Israeli communities near the Gaza Strip and the other six to exposed villages along the northern border with Lebanon.

Thanks to gifts from concerned Christians worldwide, this will bring to 132 the total number of bomb shelters the ICEJ has donated since 2008. The majority of these shelters have gone to towns along the southern border with Gaza with the remainder going to communities near the Lebanese border in the north.

The pro-Israel organization has issued an appeal to raise additional funds for more shelters in the coming weeks.

“We want to do all we can to stand in solidarity with Israel during these difficult days of relentless Hamas rocket attacks from Gaza,” said ICEJ president Dr. Jürgen Bühler. “And that starts with providing life-saving bomb shelters to the most vulnerable Israeli communities nearest Gaza, where the Iron Dome is less effective in intercepting rockets.”

He added that “Israeli residents in the Gaza Envelope have only seconds to reach safety, and they repeatedly have told us that these shelters indeed save lives. They also have given these families living in harm’s way the peace of mind they need to stay put and lead their daily lives despite the constant rocket threat.”

Working in partnership with “Operation Lifeshield,” which helps provide bomb shelters, the Christian Embassy has placed dozens of mobile units in the Gaza periphery—from Kerem Shalom near the Egyptian border in one of the southernmost parts of Israel to the cities of Sderot and Ashkelon above it.

Most have been donated to schools, day-care centers, medical clinics, youth centers, community halls and other public places that cannot operate during times of crisis without adequate bomb shelters. Requests coming in for additional shelters where regional security chiefs say there are gaps in the civilian defenses.