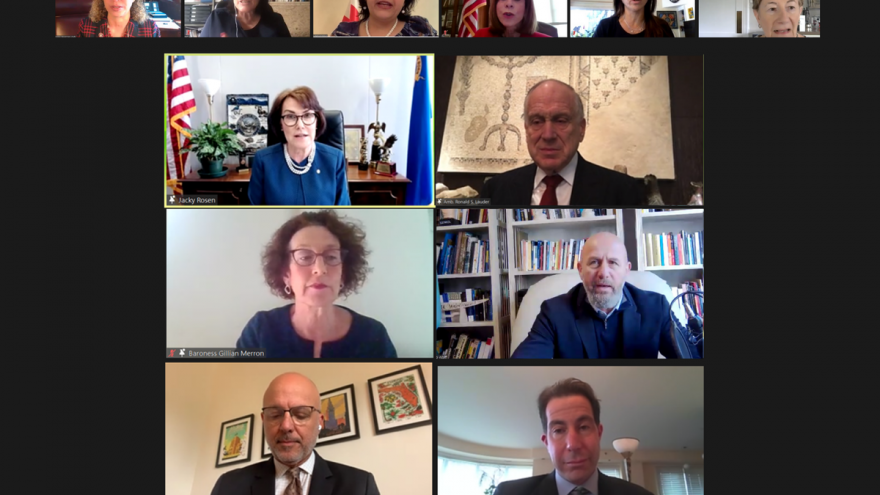 (May 14, 2021 / JNS) Jewish legislators from around the world convened on Wednesday to discuss diplomatic strategies to combat global anti-Semitism and advance human rights.

According to a news release, dozens of legislators from the United States, Israel, Canada, Britain, Argentina, Belgium and Bahrain came together during the World Jewish Congress 16th Plenary Assembly, meeting for the first time in five years to relaunch the International Council of Jewish Parliamentarians (ICJP).

“No issue threatens the Jewish community more than the alarming rise of anti-Semitism and violent extremism. This is true in the United States, and it’s true in Israel, Europe, Latin America and countries all around the world,” she said, according to the release. “By promoting dialogue and collaboration between Jewish parliamentarians from different nations, the ICJP helps advance policies that support human rights and democracy.”

The council was convened by World Jewish Congress president Ronald S. Lauder at a time when Hamas and other terror groups in the Gaza Strip has been firing rockets into Israel. By Friday, the number had reached a whopping 2,000 rockets.

“As Jewish parliamentarians, we have to fight anti-Semitic attacks wherever they occur. ”

“As the Jewish world unites in solidarity with Israel as it defends itself from terrorism, the relaunching of this critical global body, the International Council of Jewish Parliamentarians, could not be more timely,” he said. “We live in an era of conspiracy myths, rising anti-Semitism and xenophobia, and a disturbing recurrence of Holocaust denial online and offline, and the ICJP has a powerful role to play in countering these troubling, dangerous phenomena.”

During the meeting, Rosen pointed to white-supremacist riots demonstrations in Charlottesville, Va., and attacks on synagogues in Poway, Calif., and Pittsburgh, Pa.; and rapid spread of conspiracy theories involving Jews during the more than year-long coronavirus pandemic, calling it a step back for the safety and well-being of Jewish people. Anti-Semitism, she said, was on the rise on the streets, online, in political parties and on college campuses.

‘We pray for peace and security for all’

Rep. Ted Deutch (D-Fla.), the ICJP’s North American co-chair, led the second half of the convention. He said that worldwide, the principles of democracy, human rights and rule of law are under attack by the forces of racism, anti-Semitism, xenophobia, terrorism and Holocaust denial.

“It affects every Jewish community—all of us—because we are one Jewish community. As Jewish parliamentarians, we have to fight anti-Semitic attacks wherever they occur. We must come to the defense of every Jew, every Jewish community facing hatred and violence. And right now, at this very moment, Israelis, our Israeli colleagues, the Israeli people are under siege by Hamas terrorists launching rockets with the sole purpose of killing as many civilians as they can, and we, Jewish parliamentarians, cannot afford to be silent.”

Deutch said there should be no place in the world where terrorists firing hundreds of rockets at civilians should be defended.

Ben-Ari described the fear of waking up with her 4-year-old daughter in the middle of the previous night to the sound of bombs pounding Tel Aviv, urging other nations to view the current violence as anti-Semitism, according to the release.

“Every action taken by Israel is disproportionately reacted to. It’s unacceptable.”

“No nation should be subject to the barrage of rocket fire or endure this kind of bloody assault as Israel has once again. I’m extremely concerned by those who purposely demonize Israel’s conduct while ignoring Israel’s right to self-defense, including its obligation to protect all of its citizens. We pray for peace and security for all, and a return to working toward a viable two-state solution,” said Wasserman-Schultz.

“And while Israel is in such a vulnerable state, we must be more vigilant than ever because unfortunately, opposition to Israel’s actions too often spurs anti-Semitism with the United States and around the world. It’s an unfair criticism over and over again,” she continued, when actual atrocities in other nations are ignored. “Yet every action taken by Israel is disproportionately reacted to. It’s unacceptable.”

The ICJP is a global network of Jewish legislators, government ministers and other elected officials participating in a forum to promote dialogue and collaboration between Jewish parliamentarians, striving to create an enduring peace in the Middle East and protect the welfare of Jews and Jewish communities worldwide.

The plenary assembly takes place every four years, bringing together delegates from World Jewish Congress-affiliated communities and organizations in more than 100 countries. This year, the assembly has been gathering remotely from mid-April through the end of May.