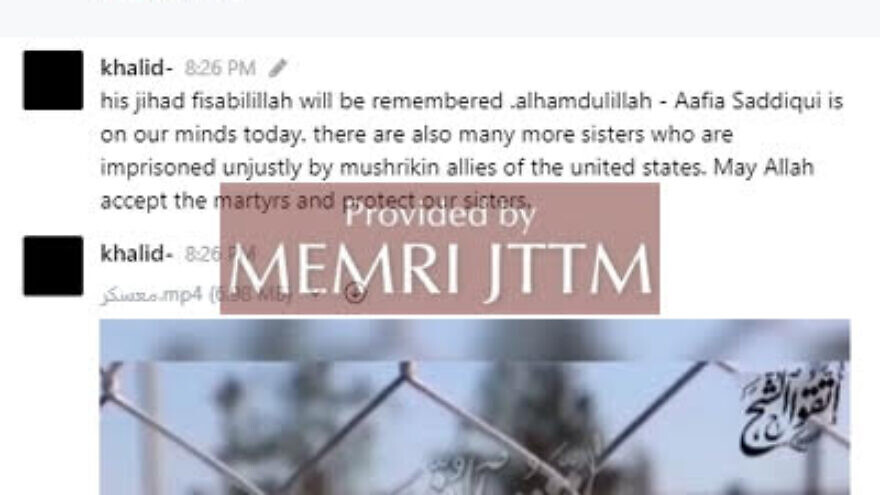 Following reports in the media about the incident and the gunman's demand while events were still unfolding, samir.muwahid, a user of the pro-ISIS Rocket.Chat server posted, “Allah Akhbar. Making Dua [prayer] for all the brothers on the fronts.” Credit: MEMRI.
Spread the word.
Help JNS grow!
Share now:

(January 18, 2022 / JNS) Following the hostage situation of four Jewish congregants of Congregation Beth Israel in Colleyville, Texas, on Jan. 15, users of the pro-ISIS rocket.chat server expressed support for the armed assailant, according to a report exclusively shared with JNS by the Media Research Institute’s Jihad and Terrorism Threat Monitor (MEMRI-JTTM).

The 44-year-old British attacker, Malik Faisal Akram, had demanded the release of Aafia Siddiqui, a Pakistani convicted of multiple felonies who is serving an 86-year prison sentence in nearby Fort Worth. She was linked to Al-Qaeda as being an operative in the early 2000s.

Following reports in the media about the incident and the gunman’s demand while events were still unfolding, samir.muwahid, a user of rocket.chat, posted: “Allah Akhbar. Making [the] Dua [prayer] for all the brothers on the fronts. May we never be silent about the Aseerun [prisoners]. They are precious in Allah’s eyes.”

According to the report, users on the server expressed support for Akram, calling him a “brother” and a “martyr,” and favoring his cause.

Akram was shot and killed by law enforcement after the Jewish hostages got out unharmed, including the rabbi, Charlie Charlie Cytron-Walker.

After Akram’s death, samir.muwahid expressed sorrow at his demise and stressed the importance of his act.

Khalid, another user, wrote: “His jihad fisabilillah [for the sake of Allah] will be remembered. Alhamdulillah [Praise to Allah] Aafia Saddiqui is on our minds today.”

In the approximately 12 years since Saddiqui’s incarceration, jihadi clerics from various streams and jihad organizations, including ISIS, have made her release a top priority, according to MEMRI-JTTM.