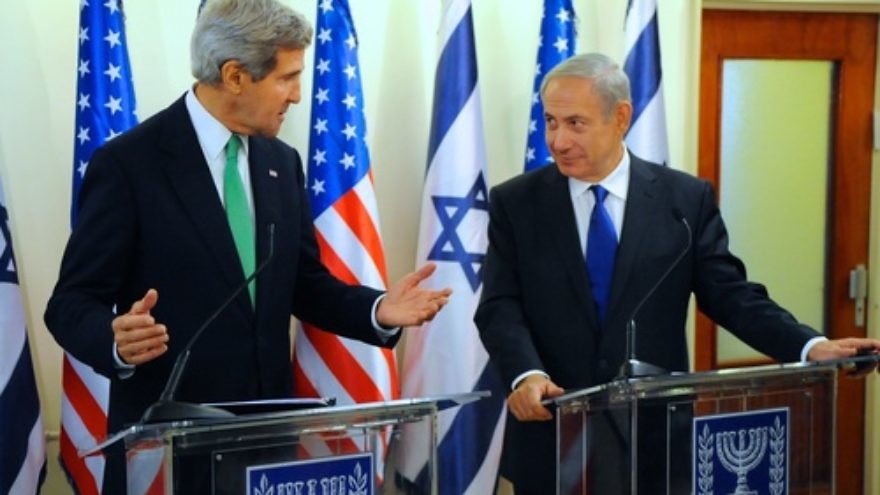 (April 28, 2014 / JNS) Israel risks becoming an “apartheid state” if a two-state solution to the Israeli-Palestinian conflict is not reached soon, U.S. Secretary of State John Kerry said, according to a report by The Daily Beast published Sunday.

The Daily Beast obtained a recording of remarks Kerry made on Friday at a closed meeting of the Trilateral Commission attended by influential officials from around the world.

“A two-state solution will be clearly underscored as the only real alternative,” Kerry was quoted as saying. “Because a unitary state winds up either being an apartheid state with second-class citizens—or it ends up being a state that destroys the capacity of Israel to be a Jewish state.

“Once you put that frame in your mind, that reality, which is the bottom line, you understand how imperative it is to get to the two-state solution, which both leaders, even yesterday, said they remain deeply committed to.”

Kerry said in a statement Monday that if he “could rewind the tape,” he “would have chosen a different word” than apartheid to describe his views on a two-state solution.

But the Emergency Committee for Israel (ECI) said Kerry’s recorded language was “no gaffe.”

“Secretary Kerry’s musings on the Jewish state’s dire future have become a regular feature of his public remarks,” the ECI said in a statement. “His latest prediction follows other statements in recent months that have in effect threatened Israel—never the Palestinians—with a list of disasters should his diplomatic efforts fail: violence, isolation, delegitimization, boycotts—and now ‘apartheid.’”

The ECI added that it is “no longer enough for the White House to clean up after the messes John Kerry has made.”

“It is time for John Kerry to step down as Secretary of State, or for President Obama to fire him,” stated the ECI. “And it would go a long way toward repairing the damage Kerry has done if his predecessor as Secretary of State, who is the likely Democratic Party nominee for president, explained why this kind of rhetoric had no place in her State Department and why it will have no place in her presidential campaign.”

The Zionist Organization of America (ZOA) also called for Kerry to resign over the remarks.

“We call upon President Barack Obama to fire him if he refuses to go. … With this statement and previous ones, Secretary Kerry has all but justified the Palestinian violence, international boycotts and delegitimization to which he referred,” said ZOA National President Morton A. Klein.

Kerry said in his clarification, “First, Israel is a vibrant democracy and I do not believe, nor have I ever stated, publicly or privately, that Israel is an apartheid state or that it intends to become one. Anyone who knows anything about me knows that without a shred of doubt.

“Second, I have been around long enough to also know the power of words to create a misimpression, even when unintentional, and if I could rewind the tape, I would have chosen a different word to describe my firm belief that the only way in the long term to have a Jewish state and two nations and two peoples living side by side in peace and security is through a two-state solution,” he said.

Before Kerry’s clarification Anti-Defamation League National Director Abraham H. Foxman called it “startling and deeply disappointing that a diplomat so knowledgeable and experienced about democratic Israel chose to use such an inaccurate and incendiary term.”

“We appreciate Mr. Kerry’s deep concern for Israel and his desires to ensure that it have a future of peace and security,” Foxman said. “Even if he used the repugnant language of Israel’s adversaries and accusers to express concern for Israel’s future, it was undiplomatic, unwise and unfair. Such references are not seen as expressions of friendship and support.”

In his recorded remarks, Kerry warned that a failure of the peace talks could lead to a spike in Palestinian violence against Israel. The American-brokered negotiations, which originally had an April 29 deadline for an agreement, collapsed last week after Palestinian Authority President Mahmoud Abbas’s Fatah party signed a unity agreement with the Gaza-based terrorist group Hamas.

“People grow so frustrated with their lot in life that they begin to take other choices and go to dark places they’ve been before, which forces confrontation,” Kerry said.

Regarding the current impasse in the peace process, Kerry said, “The reports of the demise of the peace process have consistently been misunderstood and misreported. And even we are now getting to the moment of obvious confrontation and hiatus, but I would far from declare it dead. You would say this thing is going to hell in a hand basket, and who knows, it might at some point, but I don’t think it is right now, yet.”

“There’s a period here where there needs to be some regrouping,” he said. “I don’t think it’s unhealthy for both of them to have to stare over the abyss and understand where the real tensions are and what the real critical decisions are that have to be made. Neither party is quite ready to make it at this point in time. That doesn’t mean they don’t have to make these decisions.”

Kerry added that in the future, he might propose his own peace deal and tell both sides to “take it or leave it.”

“Any suggestion that Israel is, or is at risk of becoming, an apartheid state is offensive and inappropriate,” AIPAC said in a statement. “The Jewish state is a shining light for freedom and opportunity in a region plagued by terror, hate and oppression.”

Dani Dayan—chief foreign envoy of the Yesha Council, which represents the Israeli residents of Judea and Samaria—said in a statement, “John Kerry has outdone himself this time, demonstrating a total lack of understanding of the Middle East conflict. His equation of the democratic state of Israel and apartheid South Africa is a new low in American diplomacy and an insult to the people of Israel and South Africa.”

Republican Jewish Coalition Executive Director Matt Brooks said Kerry’s language “will further encourage the Palestinians to act and speak as if only Israel must make concessions in the peace process, even as the Obama administration has stressed that the Palestinians must make ‘very, very tough decisions for peace.”

Kerry on Monday criticized the avalanche of criticism he faced after his “apartheid state” remark was reported.

“I will not allow my commitment to Israel to be questioned by anyone, particularly for partisan, political purposes, so I want to be crystal clear about what I believe and what I don’t believe,” Kerry said.

But partisan politics weren’t at play for the National Jewish Democratic Council (NJDC), which issued a rare rebuke of a leader from its own party by expressing “deep disappointment that the Secretary of State has chosen to invoke the specter of ‘apartheid’ in discussing his concerns about the failing peace process.”

“We reject entirely that racially based governance inherent in that word in any way describes Israel, as well as the implication that the government of Israel uses such prejudice to formalize disadvantages for any of its citizens or neighbors,” NJDC said.