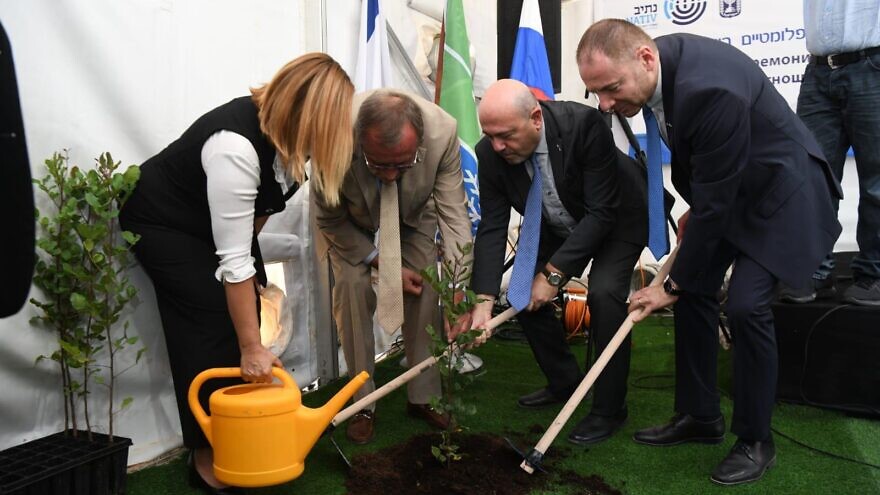 A ceremony in the Tzora Forest near the city of Beit Shemesh marks 30 years since Israel established diplomatic relations with the Russian Federation, July 7, 2021. Photo by Yosi Zelliger.
Spread the word.
Help JNS grow!
Share now:

(July 7, 2021 / JNS) Israel and the Russian Federation celebrated 30 years of diplomatic ties with a ceremonial planting of 30 trees in central Israel on Wednesday.

The ceremony took place at the Tzora Forest, a large swath of pine trees that stretch 11,000 acres, developed by the Keren Kayemeth LeIsrael-Jewish National Fund (KKL-JNF). The ceremony was broadcast live, simultaneously with a ceremony from the Skolkovo Innovation Center near Moscow, where a tree was also planted.

“Today, we plant 30 trees as a symbol of the strong bond our two states hold, and as a celebration of 30 years of a thriving, courageous and close friendship we share,” said Ronnie Vinnikov, chief development officer of (KKL-JNF). “Russia and Israel’s relations are now, more then ever, blooming in every field—whether it be trade, culture, sports, industry or diplomatic relations.”

Official relations between Israel and the Russian Federation were formed in 1991. Ties between the two countries facilitated a large emigration of Jews from former Soviet states to Israel. As a result, Israel is the only part-Russophone (having a large portion of Russian speakers) country outside the former Soviet Union.

“Russian is the third most spoken language in Israel,” according to a KKL-JNF statement.

The ceremony took place after Monday’s call between Israeli Prime Minister Naftali Bennett and Russian President Vladimir Putin. It was the first time the two have spoken since Bennett was sworn in on June 13 as the head of Israel’s 36th government.

Bennett expressed his appreciation for the historic bond between the Russian and Jewish peoples, saying that he views aliyah from Russia as a bridge between the two countries. The heads of state also agreed to soon meet in person.