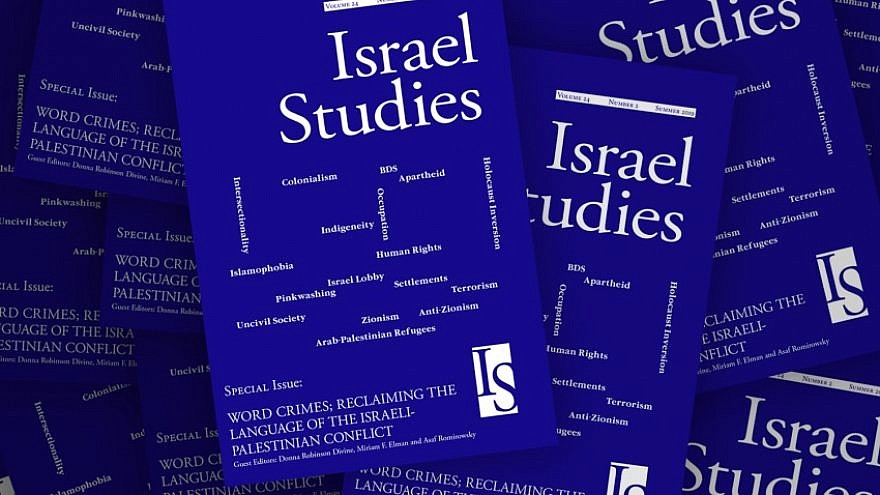 (May 28, 2019 / JNS) When the Israel Studies journal published the special edition of its Summer 2019 issue focusing on the use of language to delegitimize Israel, the issue’s guest editors were accused of seeking to shut down debate and the academic merit of their work was called into question. But it is their left-wing critics, they say, who are actually trying to shut down debate, and controlling the language used to discuss the issue is one of the main ways that they are doing it.

The special issue, titled “Word Crimes: Reclaiming the Language of the Israeli-Palestinian Conflict,” examines how terms such as “apartheid,” “genocide,” “ethnic cleansing” and “colonialism” have been used to delegitimize Zionism and the Jewish state.

Divine told JNS that this issue is important because “the language one uses to discuss Israel or the Palestinians affects how you think about the conflict.” Misused language, she said, has already influenced the conventional wisdom in much of the media, and even in academia and at think tanks.

“Words such as ‘Holocaust’ are being misappropriated to apply to the Palestinians and make Israel appear savage, distorting the reality,” said Divine, who is a professor emerita of Jewish studies and government at Smith College, recently retired after more than 40 years of teaching.

Asaf Romirowsky told JNS that the motivation behind the edition was the “hijacking” of Israel-studies programs by terminology whose actual purpose is to shut down debate. He pointed to the BDS movement’s exploitation of the word “apartheid” as an example.

Indeed, he said, the edition’s critics are not interested in academic debate either.

“Our opponents in the Israel Studies Association and Israel Studies journal are attacking us personally instead of engaging in a debate,” he said. “It’s academic thuggery.”

Asked about where the opposition was coming from, Romirowsky said mainly from hard-left academics who are extremely critical of Israel.

Elman told JNS that “nine out of 25 members of the editorial board of the Israel Studies journal signed a letter of dissent against the special issue. Though not a majority, they still acted like they spoke for everyone.”

Not content with this, she said, “there are also some prominent people, who are not on the board, like Ian Lustick of the University of Pennsylvania and Yair Wallach of SOAS University of London, who have not acted in a collegial manner and have taken part in an online smear campaign.”

Some of the detractors, she added, went so far as to try to convince the AIS to boycott Israel as a venue for its annual conference, which is scheduled to be held next month at Kinneret College in northern Israel along the Sea of Galilee.

Elman noted that many of the detractors are Israeli and British academics associated with BDS. “It is curious,” she said, “that the same leaders of efforts to promote boycotts of Israel are now involved in trying to bring down this special issue and Professor Divine.”

These individuals, she said, are bypassing the usual editorial process and instead trying to influence readers directly.

Asked about the makeup of the AIS, Elman said that it was quite diverse, but that overall membership tends to the left of the political spectrum. It includes some scholars who support BDS, she said.

Elman said that while some of the criticism of the issue is superficially objective—for example, criticism that the essays are too short or do not have enough footnotes—“it appears that this is manufactured outrage in order to hide something deeper, either some personal vendettas or support for an anti-Israel narrative.”

‘Words have been distorted over time’

The issue is garnering attention, she said, because it deals with the wider attack on academic freedom that has been growing in strength over the past several years; some academics are calling for the special issue to be withdrawn for the editors to be forced to issue an apology.

“Instead of going on the warpath and uniting with anti-Israel BDS activists,” said Elman, “these academics that disagree should focus on writing substantive rebuttals.”

She drew a comparison to the many well-publicized instances of pro-Israel or conservative speakers being forcefully silenced on American university campuses.

“What does it say to graduate students and junior faculty,” she asked, “who now see that if you challenge this discipline’s orthodoxies, you are going to get shut down and trashed by online mobs?”

Asked about the relationship between the AIS and the Israel Affairs journal, Elman said that there was no financial connection between the two, but a loose relationship whereby they promote each other. The AIS, she said, has no editorial control over the Israel Studies journal.

Far from being an attempt to stifle debate on Israel, said Elman, the point of the special issue was to emphasize that only if the language is reclaimed can such debate flourish.

She emphasized that “words have been manipulated and distorted over time, and it is worth reclaiming the language used to describe Israel and the conflict in order to foster robust discussion and inquiry.”