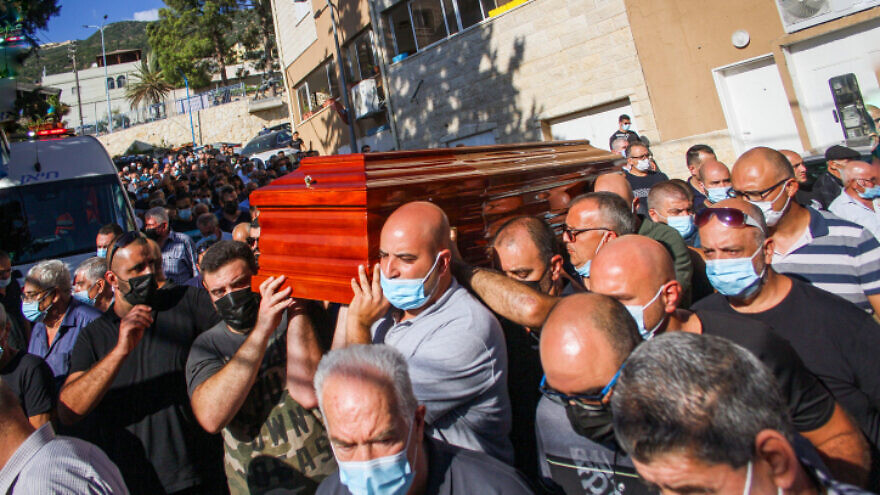 The funeral of Sahar Ismail, the education minister's aide for Arab society, in the northern Israeli town of Rameh on Aug. 16, 2021. Photo by Flash90.
Republish this article
1316 WORDS
Spread the word.
Help JNS grow!
Share now:

(October 20, 2021 / JNS) Israel continues to grapple with the growing violence from the Israeli Arab community as leaders promise beefed-up measures for police and security forces. However, questions over the ability of the government and police to reign in the violence amid ethnic and cultural tensions between Israel’s Jewish majority and Arab minority underscore the challenge officials face.

“Arab leaders bear the most responsibility for the situation; to solve it, they should start educating their next generation to respect the state, the laws and the security forces,” said Shadi Halul Capt. (res.), the head of the Christian IDF Officers Forum and former Knesset candidate.

“Arab leaders know the problem of violence is related to their aggressive speech and behavior,” said Halul, who made news back in 2015 when he successfully led a campaign to have his child’s state registry changed from Arab to Christian Aramean in the interior ministry.

For example, Israeli police arrested four suspects earlier this month in connection with an attack on police officers attempting to apprehend a suspect in the Israeli Arab town of Kfar Qasim. Video footage of the incident shows the officers being attacked by young Arab men attempting to arrest an individual wanted in connection with an earlier attack. 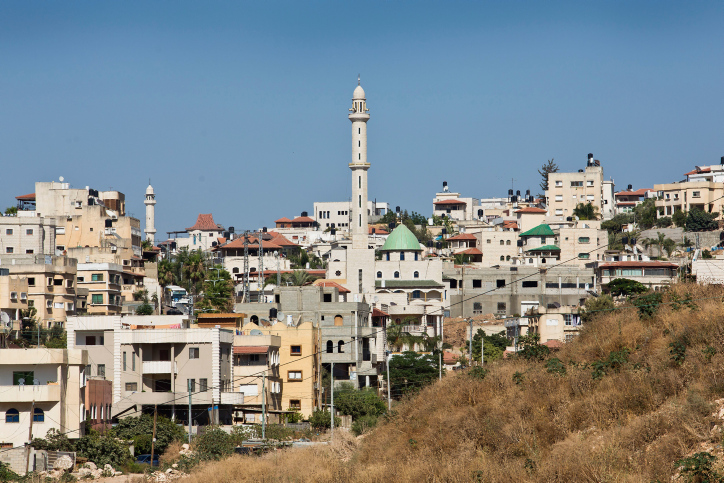 View of the Israeli-Arab town of Kfar Qasim near Tel Aviv, July 2, 2013. Photo by Moshe Shai/Flash90.

At a cabinet meeting on Oct. 17, Israeli Prime Minister Naftali Bennett warned on the consequences of the growing violence in the Israeli Arab community.

“We are losing the state,” Bennett warned as the cabinet voted to expand police search powers to fight the violence.

As a result, the Israeli government approved legislation that would expand the powers of the Israel Police, allowing residential searches without a warrant.

The move is part of the government’s efforts to curb a surge in violent crime in Israel’s Arab community, which claimed its 100th victim this week.

Backed by Justice Minister Gideon Sa’ar, the bill allows police officers to enter a home if they believe that by doing so they can locate a suspect or evidence related to a serious crime.

“We’re at war,” Sa’ar said. “We must give the police and law enforcement authorities better tools to accomplish their missions. The right to life is also a human right. I’m letting you know: I’ll bring more laws so that we’ll prevail in the campaign against crime in the Arab sector.”

Indeed, violence in the Arab sector has spiked in recent months, even drawing the attention of international media outlets such as The New York Times and the BBC.

The New York Times article published earlier this month mentioned that there have been at least 16 murders in Israel’s Arab sector last month, with Arab perpetrators accounting for around 70 percent of all homicides.

Speaking to Israel’s Kan Reshet Bet radio, he said, “You won’t see the Israel Defense Forces or the Shin Bet on Arab streets. The treatment and authority still rest with the police, but we need backup.”

Violence in the Arab community is an ongoing issue, making headlines in Israeli news media each time a spike in crime arises.

For example, a report by the Abraham Initiatives in 2019 stated that a total of 71 Arab Israelis were killed in 2018, representing nearly 61 percent of all murder and manslaughter victims in the country that year and three times the percentage of the Arab population. In 2019, the number of Arabs killed in 2019 totaled 89—65 percent of the total number of murder and manslaughter victims.

The report recommends a strong police presence in Arab communities; having a third party monitor police activity in Arab areas; and increasing dialogue between the police and Arab society.

It also blames various factors for the tallies, such as poverty, high unemployment rates and “changes in the role of the family in Arab society, including a transition to a more individualistic society so that the family no longer constitutes a source of security and law enforcement as it did in the past.”

However, the explanation leaves questions since many ethnic groups and cultures worldwide suffer from poverty and unemployment, and exhibit far less violent tendencies. For this reason, culture remains a focal point for discussion and a key factor, according to observers.

Looking at the statistics of global murder rates published in a report by the United Nations Office on Drugs and Crime, South Africa had a very high homicide rate of 31 per 100,000 people in 2012, while Israel had less than 2 per 100,000. Japan’s rate was extremely low—nearly zero—while Russia had a rate of 9.2.

Arab Muslim leaders have delegitimized the police and security forces for years, noted Halul. For example, when his organization encouraged Christians in Galilee Arab towns to join the IDF and police, “these same Arab leaders started a massive campaign against us and the security forces.”

Moreover, when police enter Arab towns to stop criminals and the residents initiate clashes with them, Arab Knesset members accuse the police of discrimination and excessive use of force.

“Now, after the Arab crime problem has developed into a monster, they started blaming the police for doing nothing, which is hypocrisy,” asserted Halul.

Halul suggested there should be education in the Arab sector towards tolerance and respect for the state, but “this can only happen after a powerful intervention by the security forces.”

Arab on Jewish violence is also typical, spiking in mixed Jewish-Arab cities during the 11-day May conflict with Hamas and other terrorist factions in the Gaza Strip.

Clashes between Jewish and Arab Israelis in the country’s mixed-population towns were worse than the public believed, even bordering on anarchy, said Border Police Commissioner Maj. Gen. Amir Cohen following the violence.

‘Not a problem of illegal firearms’

Philip Carl Salzman, emeritus professor of anthropology at McGill University in Montreal, told JNS, “In a society that makes strong in-group/out-group distinctions, which is typical of tribal societies, bringing in outside agencies that cross ethnic boundaries is likely to stoke resentment and resistance.”

“What this is is not a problem of illegal firearms. On the contrary, the population likely wants to defend itself; taking away its firearms leaves all of the power in the hands of the criminals,” he added.

Salzman describes in his book, Culture and Conflict in the Middle East how resorting quickly to violence is part of Arab culture and its tribal roots. Historically, if members of society would not stand up for their rights, “they were regarded as weak” and “others would not be afraid of offending them.”

Salzman also explained how the process of collective responsibility in Arab society works. For example, small groups face other small groups, and mid-sized or large-sized groups face off against another of equal size in a confrontation. This translates into “family vs. family, lineage vs. lineage, clan vs. clan, tribe vs. tribe, confederacy vs. confederacy, sect vs. sect, the Islamic community [umma] vs. the infidels.”

Therefore, beyond the criminal element of Arab on Arab violence is the cultural, tribal element such as family and clan feuds.

Halul didn’t deny that the police should be doing more to get the violence in the Arab sector under control, saying he agreed with those calling for military and Shin Bet intervention to round up weapons inside Arab towns.

However, he warned, this would not be enough to stop the intra-Arab violence since it also requires “changing the culture of hatred, violence and the law of the jungle.”