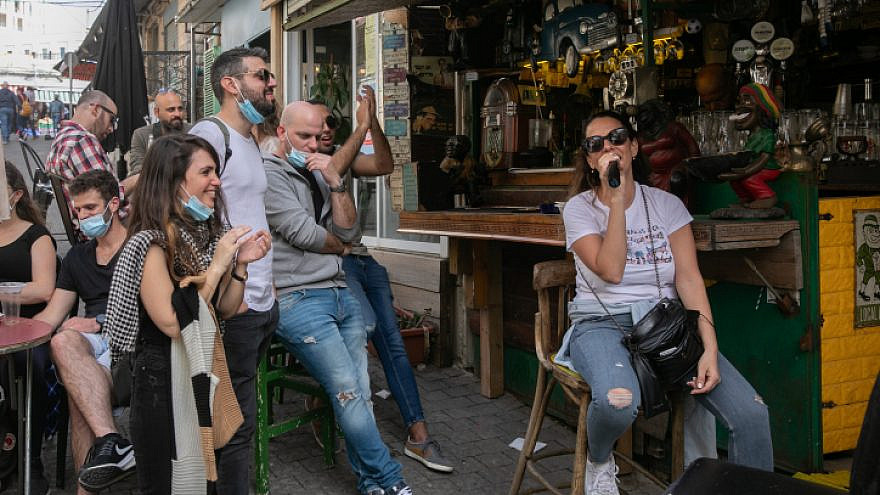 (March 15, 2021 / JNS) Bring us your tired, your down-clad and pandemic-weary souls yearning to breathe … a lungful of Israeli air.

With apologies to Emma Lazarus and her poem “The New Colossus” that adorns the Statue of Liberty, for many, that yearning to be in Israel—even the glimmer of a hope to be able to make the trip—can come down to a particular sight or sound, smell or taste that’s a welcome balm to today’s COVID weary world (see below for some experiences guaranteed to whet your appetite).

Of course, there are certain hurdles to be cleared first. After more than a five-week shutdown, Ben-Gurion International Airport partially reopened its skies earlier this month. And, even when they are once again fully operational, visitors and citizens may still face a mandatory two-week bidud (“quarantine”) period—something that can put a serious crimp in touring.

But such mere logistical obstacles can’t stifle the longing.

Those dreams take Dr. Elana Tunitsky-Bitton both backward and forward: backward to earlier visits she made with her husband, Andre, and their three children, and forward to the one she’s hoping they’ll be able to make soon. “Now that the kids are older, they’re the perfect age to do all the things we couldn’t do when they were little,” says Tunitsky-Bitton, an obstetrician, speaking from her office in West Hartford, Conn. Topping her personal bucket list? A family backpack trip through the north with hikes through the Golan Heights and the Hula Valley’s famed nature reserve.

And as anxious as such would-be travelers as Tunitsky-Bitton are to make the trip, Israel’s moribund travel industry is no less eager to get back to work. 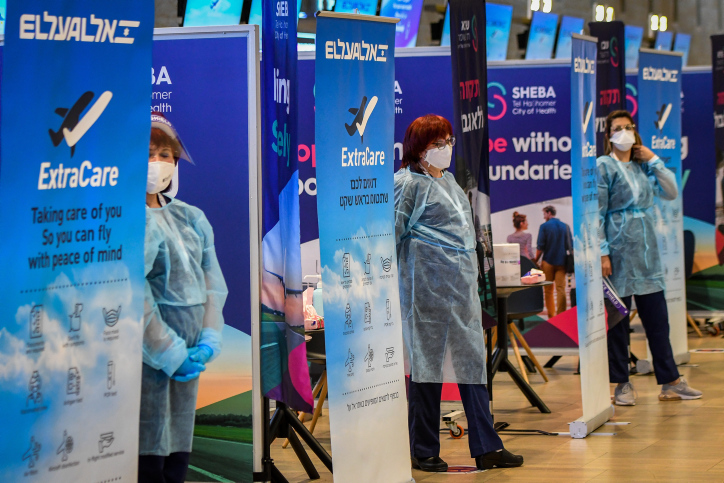 Coming off a record-breaking 2019 with its 4.5 million visitors, more airlines entering the market and its 42 billion-shekel impact on the economy, “everyone thought in 2020, we’d hit 5 million, but instead, the pandemic brought near-total collapse,” says Salansky.

The virus has impacted not only the millions of frustrated would-be tourists, but the hundreds of thousands of Israelis dependent on tourism—from the top hotel executive to the taxi driver to the bagel baker to the family owning a souvenir shop on Jerusalem’s Ben-Yehuda Street to the immigrant dad supporting his children mopping hotel floors after a convention.

And among the hardest hit are Israel’s 4,000-plus tour guides.

A year ago, Shalom Israel Tours and its thousands of customers kept 25 of these guides hopping with group trips crisscrossing the country. This year, reports owner Shalom Stark, his former guides are working as security guards or in other jobs—he himself is devoted full-time to high-tech these days—or living off government benefits and dwindling savings. 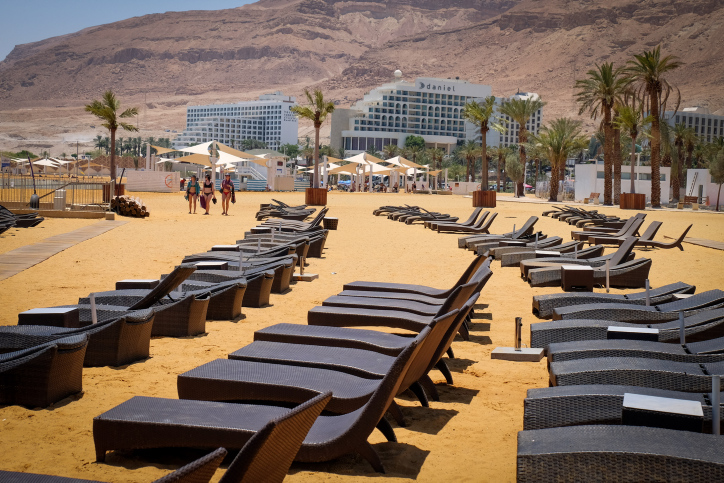 Hotels by the Dead Sea in southern Israel on July 10, 2019. Photo by Gershon Elinson/Flash90.

Domestic travel has helped somewhat, say observers, with Israelis patronizing national parks and attractions, resorts and hotels (when not closed for a nationwide segur, or “lockdown”). Though these “stay-cations,” especially in demand during high travel times like summer vacation, have taken the chill off the industry’s depression, they represent less than half the revenue of the fully-functioning travel scene, according to Salansky.

‘Stronger bonds between Israel and Jews around the world’

But Israelis can’t stay down for long, and in this case, much of their optimism is delivered via syringe. “We have the highest incidence of vaccinated citizens in the world,” says Moti Efrati, vice chairman of the country’s Tour Guides Association. “That looks good for domestic tourism and, eventually, for international, too.” 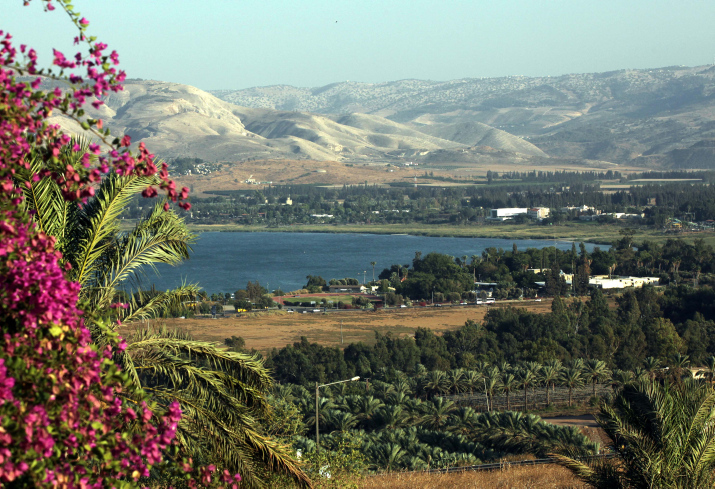 Waiting with anticipation are teens ready for their summer and gap-year programs, grandparents longing to treat a grandchild to an Israeli bar/bat mitzvah, organizations hoping to resume their conventions there and, quite possibly the most motivated of all, those with Israeli children and grandchildren they haven’t been able to hug in a year.

It’s this kind of travel, says Salansky, “that’s always built even stronger bonds between Israel and Jews around the world.”

Take Janis Monat of Sharon, Mass., for instance. It’s been 18 years since the clinical social worker mother of two has set foot in Israel, and what is she looking forward to the most? Besides “all the new museums and exhibits that have been built since my last visit,” she says, “I’m also craving talking with a native Israeli or two, feeling their warmth, hearing their delightful accent.”

“So many people are ready to come as soon as they can get here, and with the vaccine, hopefully, they will begin to see Israel as a safe country to visit,” says Salansky. “Then the rest of the tourists will follow.”

But it’s going to be a slow—and regulated—recovery, Efrati predicts, with an eye to limiting crowds, including how many will be allowed on a bus and at parks and other sites. “It’s probably going to take years to get back to where we were a year ago,” she laments. 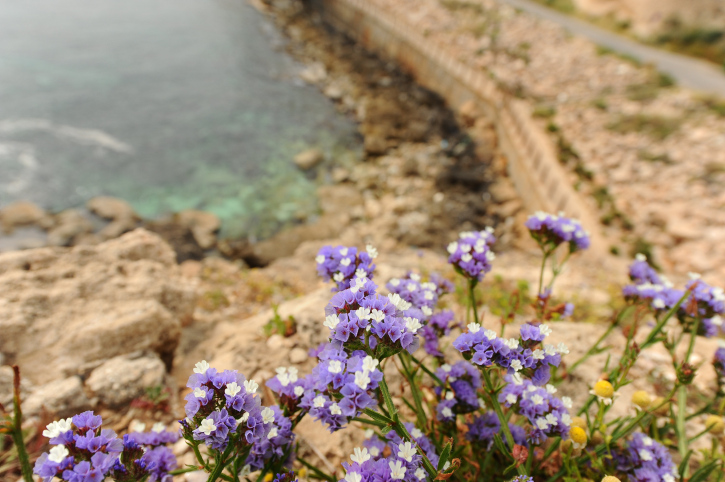 Flowers bloom in Rosh Hanikra at the site of a geologic formation in Israel on the coast of the Mediterranean Sea in northern Israel, a white chalk cliff face that opens up into spectacular grottos, May 1, 2019. Photo by Mendy Hechtman/Flash90.

Stark agrees, recalling the nearly four years needed to fully jump-start tourism after the Second Intifada. His prediction: Even under optimal circumstances (assuming the skies are open to travel and quarantine and related rules are relaxed), “it’s going to take another year or more just to recreate the infrastructure needed for a recovery.”

To keep the dream alive in the interim, the tourism ministry is sending out video tours and presenting long-distant programs to communities across the Diaspora (see list below for some you can enjoy at home without social distancing).

“They’re not a substitute for the real thing but something to whet the appetite, to keep Israel top-of-mind for everyone looking forward to the day when they can come back.” And, she adds, “I’m an optimist, so when I see the national parks reopening soon, the restaurants, and hopefully, the hotels, I believe it’s only a matter of time.”

Tunitsky-Bitton is looking forward to that day.

“Not only because of the limitless number of places to see and things to do there,” she explains, “but because, unlike any other vacation, each time we go, it builds Jewish identity for all of us and an understanding of our people’s history. It’s so much more than sightseeing—being in Israel gives a sense of belonging.”

Eye to eye with a dolphin. In Eilat, you can scuba dive or snorkel in the coral reefs of the Red Sea or, for the less adventurous, take a sunset cruise. Just bring your camera and sunscreen.

Calling all would-be archeologists (and beach-combers). You won’t want to miss the Caesarea National Park, home to King Herod’s harbor and an impressive stone amphitheater, both faithfully restored, plus a beach that loops along this Mediterranean shore. 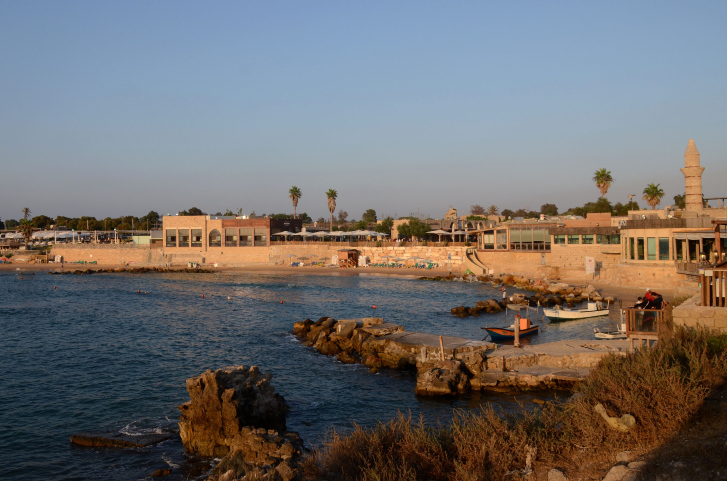 A view of the beachfront at Caesarea National Park in Caeserea during sunset on July 8, 2012. Photo by Danna Hymanson/Flash90.

Cable car with a view. To experience the Rosh Hanikra grottos, take a cable car all the way down to sea level and then explore the grottoes (sea caves), formed over the years by waves pounding onto rock.

Best falafel in Israel? The competition is tough, but Haifa’s Falafel Ha’zkenim has garnered an impressive following. Bring your appetite … and extra napkins. Israeli falafel is as messy as it is scrumptious.

Port of call. Jaffa Port, the ancient and historical predecessor to modern-day Tel Aviv, offers a vibrant nightlife, antique stores and boutiques, and eateries and bakeries galore, all within a vista of incredible sea views.

An art lover’s fantasy. In Tzfat, famed as the birthplace of Kabbalah (mystical Judaism) and perched high in the Upper Galilee, you’ll discover a wide variety of art from paintings to pottery to lithographs in dozens of galleries, some tucked away in walls hundreds of years old.

View from the top. Is Masada, in the Judean Desert, a perennial favorite with visitors because of its stunning view of the Dead Sea and other panoramic vistas, its crystal-clear air or the dramatic story of a band of Jews under siege by Roman troops during the first Jewish Roman war? At the top, you can write your name in a Torah scroll being written by a scribe.

Taste of the Kinneret. Decks, at Tiberias on the coast of Israel’s largest lake, is just one of the restaurants known for its freshly caught St. Peters fish, to be enjoyed while savoring a picture-perfect sundown over the Sea of Galilee. During the day, visitors can swim in or sit by the water. Bring a picnic lunch.

Free float. For centuries, the salt-laden Dead Sea (Yam Hamelach)—the lowest spot on Earth—has attracted visitors from the world over to its healing nutrient-rich mud and, in current times, to its many rejuvenating spas.

A local call. The Kotel, or Western Wall, is the only remnant of the retaining wall of Jerusalem’s Second Temple. The wall, reclaimed by Israel in 1967’s Six-Day War, has long been a magnet for pilgrims from around the world. While there, don’t miss the underground tunnels, an excavated souvenir of King Herod’s reign. 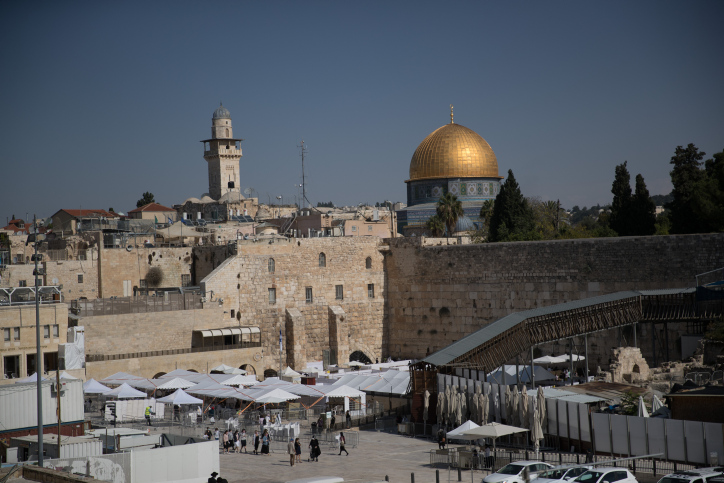 A view of the Western Wall in Jerusalem’s Old City on Nov. 9, 2020. Photo by Yonatan Sindel/Flash90.

For the time being, here is a selection of virtual tours that are just a mouse click away. Note: Many of these carry a fee.

Yoni and Nina Tokayer, known better as the Israeli-American singing duo Yonina, have created a musical virtual tour of ancient Jerusalem (he’s also a tour guide) for communities to use. Here’s a taste: https://www.yoninamusic.com/jerusalem-virtual-tours

Others collected by the Ministry of Tourism:

This year many Israeli museums are open to virtual visitors, offering tours through their websites. Among them are the Tower of David Museum, the Tel Aviv Museum of Art, the museum of the Jewish people at Beit Hatfutsot and more.

Many other popular sites in Israel have jumped aboard the virtual tour bandwagon. Among them: the City of David and the Old City of Akko.

And the 3DIsrael website (www.3disrael.com) delivers a selection of sites with a 360-degree view.

On Akko’s official tourist website, you can find all you need to know about the ancient city, from historical facts, to beautiful picture galleries and a fun & exciting virtual tour for the whole family! https://www.youtube.com/watch?time_continue=3&v=oGtpVjWNKfo&feature=emb_logo