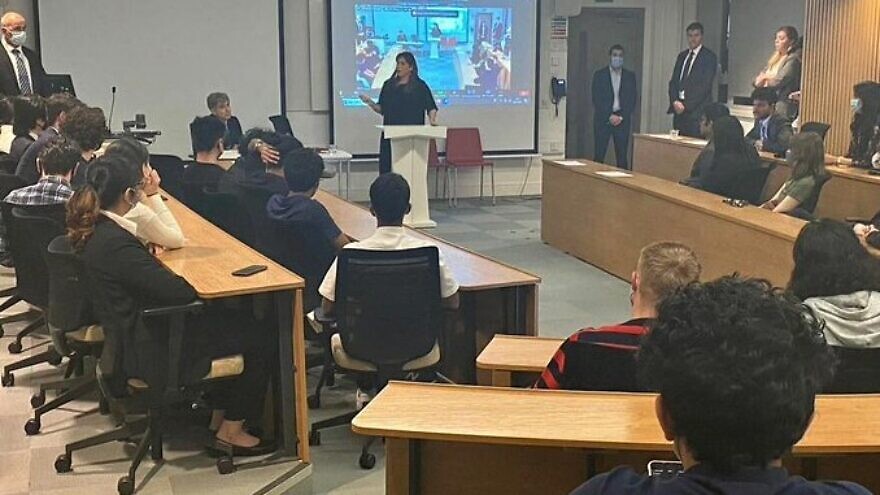 (November 10, 2021 / JNS) Israeli Ambassador to the United Kingdom Tzipi Hotovely said on Wednesday that she would “not be intimidated” after facing angry pro-Palestinian protesters outside of a debate held at the London School of Economics.

After a student debate at the university, Hotovely faced loud protests and shouts from groups gathered outside after she left the event.

“I had an excellent event at #LSE, and I will not be intimidated. I will continue to share the Israeli story and hold open dialogue with all parts of British society,” she tweeted.

The student union debating society at the research university faced criticism for inviting the Israeli ambassador, resulting in a pro-Palestinian student group organizing protests against the event, reported AFP.

Local police kept order but made no arrests, according to the report.

Very disturbing scenes! On the 83rd anniversary of Kristallnacht – when mobs attacked Jews in Nazi Germany – a violent mob stifled free speech & harassed Jews – forcing the representative of #Israel in the UK, Ambassador Hotovely, to be taken off campus under heavy security.(1/3) pic.twitter.com/TdO0tkmv9s

Christians United For Israel (CUFI) UK swiftly condemned the incident at the London School of Economics.

“Christians United for Israel UK strongly condemns the violent behaviour towards Tzipi Hotovely, Israel’s ambassador to the UK, from pro-Palestinian activists outside the London School of Economics. Anti-Semitic hatred of Israel has no place on Britain’s streets or within our society,” Des Starritt, CUFI UK Executive Director, said in statement. “Israel is a cherished friend and ally of Britain, and we will always stand against this hatred.”