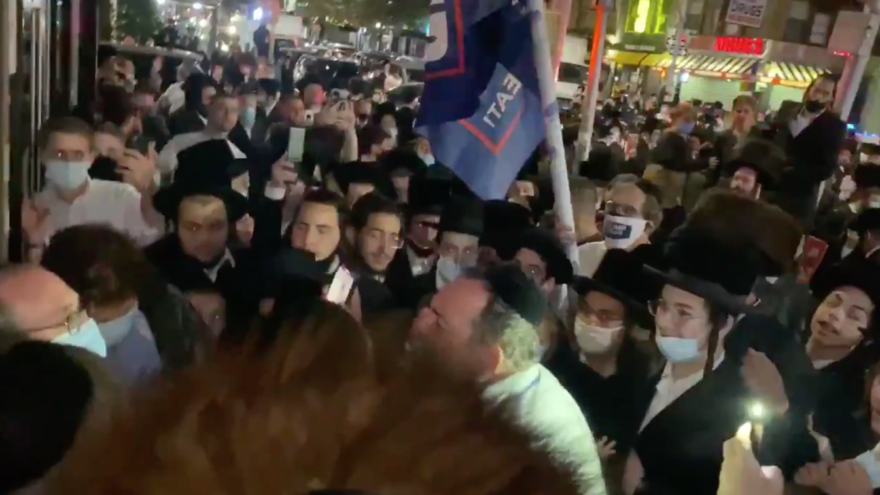 (October 8, 2020 / JNS) A reporter was attacked in Brooklyn, N.Y., on Wednesday night while covering protests by haredi Jews against New York Gov. Andrew Cuomo’s new coronavirus restrictions, including closing schools and yeshivahs, and his threatening to shutter synagogues and other houses of worship.

Jacob Kornbluh, national politics reporter for Jewish Insider and haredi himself, tweeted: “I was just brutally assaulted, hit in the head, and kicked at by an angry crowd of hundreds of community members of the Boro Park protest—while yelling at me ‘Nazi’ and ‘Hitler’—after Heshy Tischler recognized me and ordered the crowd to chase me down the street.”

That crowd “pinned” Kornbluh “against a wall” and shouted moyser (Hebrew for “snitch”), according to Jake Offenhartz, a reporter for the Gothamist, who tweeted about the incident.

I want to thank the people who got in harm’s way—and might have gotten injured—to protect me. I am filing charges against Heshy Tischler for incitement and physical assault and will seek charges against any individual who hit me.

Tischler, a community activist and right-wing radio host, and other ultra-Orthodox Jews were apparently incensed by Kornbluh for highlighting that community’s defiance of coronavirus restrictions.

Kornbluh said he “was saved by heroic police officers and several community members.” He added that he would file charges against Tischler “for incitement and physical assault, and will seek charges against any individual who hit me.”

Here’s Heschy egging then on. “He’s lucky time be alive,” one of the protesters told me after.

A few yards away, cops agree to close more streets, joking around with same men who just beat up a reporter pic.twitter.com/UekTnKQqrA

Kornbluh told JNS that he has filed the charges against Tischler.

While Kornbluh said he was “physically OK,” he noted that his health might have been compromised because many of those pinning him down were “not wearing masks and came in close contact” with him.

Anti-Defamation League national director and CEO Jonathan Greenblatt tweeted: “Violence and incitement are inexcusable. Our hearts go out to @jacobkornbluh, a mensch and member of the free press. Differences should be settled by exchanges of ideas. The Jewish community must strive for civility and dialogue.”