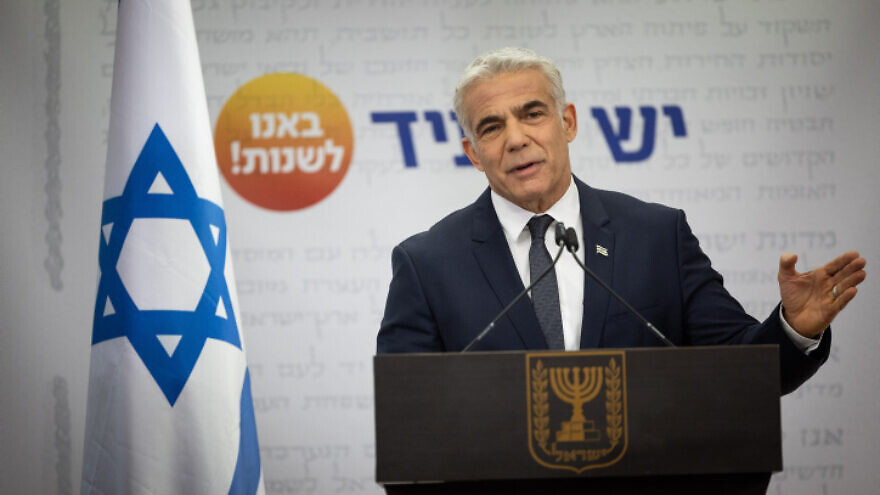 Israeli Foreign Minister and head of the Yesh Atid Party Yair Lapid speaks during a faction meeting at the Knesset in Jerusalem on Dec. 13, 2021. Photo by Yonatan Sindel/Flash90.
Republish this article
935 WORDS
Spread the word.
Help JNS grow!
Share now:

(January 10, 2022 / JNS) Last week, Israeli Foreign Minister Yair Lapid warned that Israel will face increasing allegations that it is an apartheid state in 2022, with the foreign minister saying that he fears that opponents of Israel will attempt to target Israel’s involvement in sporting and cultural events.

“The concern from the foreign ministry is that you have three or four different legal proceedings in which allegations of apartheid have been made and that at least one of them may end up endorsing these allegations,” Yuval Shany, professor of international law at Hebrew University and research fellow at the Israel Democracy Institute, told JNS.

He said Israel faces charges of apartheid at 1) the U.N.’s Commission of Inquiry, which has an “open-ended mandate” to look into allegations of Israeli discrimination; 2) the Geneva-based U.N. Committee on Elimination of Racial Discrimination (CERD), which is reviewing a Palestinian Authority complaint against Israel accusing it of apartheid; and 3) the International Criminal Court (ICC), where “certain Palestinian groups have submitted allegations concerning Israeli practices in the West Bank being a form of apartheid.”

“All of these tracks are aimed essentially at obtaining a legal, or quasi-legal, finding that Israeli practices amount to systemic discrimination or a form of apartheid in international law,” he said.

Hillel Neuer, executive director of UN Watch, told JNS that the Commission of Inquiry is the “primary threat.” The commission was established by the Human Rights Council following Israel’s 11-day conflict with Hamas in the Gaza Strip last May. Neuer said it has become “standard practice” for the United Nations to investigate Israel for alleged war crimes after each round of fighting, but this time the commission is “unprecedented in its scope.”

It will investigate “so-called ‘systematic discrimination’—mass discrimination within Israel and the territories,” he said. “It’s quite clear that it’s going to accuse Israel of apartheid. This inquiry has no end, meaning it doesn’t last six months or a year. It will be reporting twice every year.”

Neuer said the new mandate in which the commission is authorized to continuously investigate Israel is “inspired by the zeitgeist in America” where accusations of systemic discrimination have become the “fashionable trend.” He sees the focus on racism as a “modern form of anti-Semitism,” noting that Jews have been attacked throughout history as being opposed to whatever society identified as “the highest virtue.” “Today, in 2022, anti-racism is the highest virtue, and so it’s not accidental that Israel is accused … of being intrinsically racist,” he said.

Shany, who noted that the apartheid charge has been leveled at Israel for some time, wouldn’t speculate as to why it’s gaining momentum now. He agreed that it’s possible that the political temper in the United States is a contributing factor but said it’s “probably a combination of many reasons.”

‘Wind in the sails of the BDS movement’

Pnina Sharvit Baruch, a senior research associate at the Institute for National Security Studies (INSS) and head of its program on law and national security, told JNS that Israel’s opponents have at least one practical reason for pushing apartheid charges.

She said the two reports that will be produced by the Commission of Inquiry and the Committee on Elimination of Racial Discrimination are designed to push the new ICC prosecutor, Karim Khan, to prioritize the investigation against Israel started by his predecessor, Fatou Bensouda. Khan is more pragmatic than Bensouda, she noted, and based on his own comments, “I’m not sure he would like to put our case at the top of his priorities,” she said.

“So this would be an attempt, first, to push him into pursuing the investigation and, second, to try to persuade him to include in the investigation also claims about apartheid because apartheid is one of the crimes against humanity included in the Rome Statute,” she explained, referring to the treaty that established the ICC.

“Of course, more generally, it’s part of the campaign against Israel—to try to get more countries, organizations and companies to boycott Israel, to divest from Israel under the whole idea of the BDS movement,” she said.

She doesn’t see a way to stop these U.N. bodies from condemning Israel, noting that the United Nations has appointed South African Navi Pillay, known for her hostile views to Israel, as head of the Commission of Inquiry. She said it’s a disturbing development. “Apartheid had been considered going too far, and now there’s an attempt—it might succeed, too—to put it within legitimate criticism against Israel. I think that’s very bad for Israel.”

As for Lapid’s belief that sports and cultural events would be the first target, Shany agreed that Lapid was right in pointing out that “this is going to put wind in the sails of the BDS movement and basically render cultural, educational, sports relations with Israeli counterparts as politically unacceptable in the eyes of increasing segments of the population.”

“During that time, Jews in America were being attacked on the streets in Los Angeles, in New York and elsewhere, and that was in connection with the war that was happening in Israel,” said Neuer. “Accusing the Jewish state of being an evil apartheid state is a means to delegitimize and demonize—and even physically attack—Jews. I think this cannot be underestimated. Exclusions from certain international bodies would be only the tip of the iceberg.”