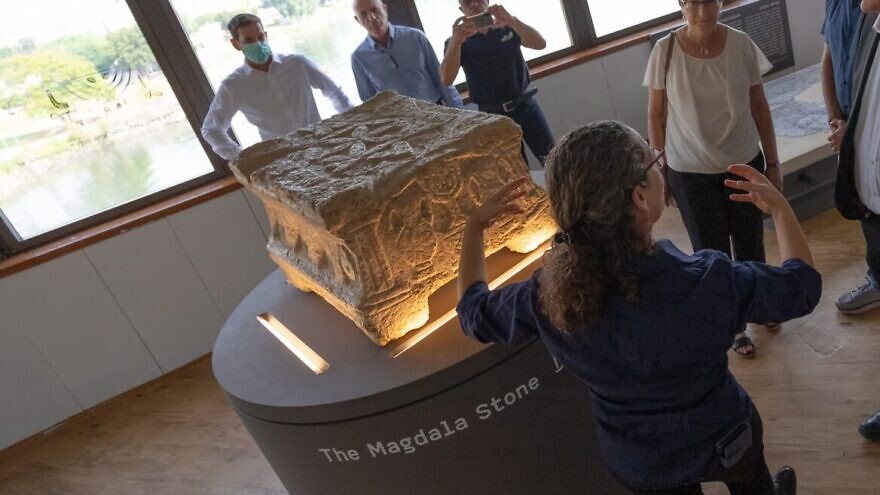 (December 15, 2021 / Israel21c) An oil lamp bearing the symbol of the seven-branched menorah; a stone from the Second Temple; inscriptions that incorporate the words “Shalom,” “Shabbat” and the names of the sages Shimon, Jacob and Hoshaya. These are among 150 rare ancient artifacts on view in the Israel Antiquities Authority’s new exhibition, the Sanhedrin Trail, at the Yigal Allon Center on the Sea of Galilee at Kibbutz Ginosar.

The new exhibition includes items from the Mishnaic and Talmudic periods, including the 2,000-year-old Magdala Stone bearing depictions of the Second Temple, that stood in Jerusalem from 516 BCE to 70 CE.

The stone was discovered in IAA excavations in 2009 in Migdal—believed to be the hometown of Jesus’s mother, Mary—in the center of a synagogue from the Second Temple period. 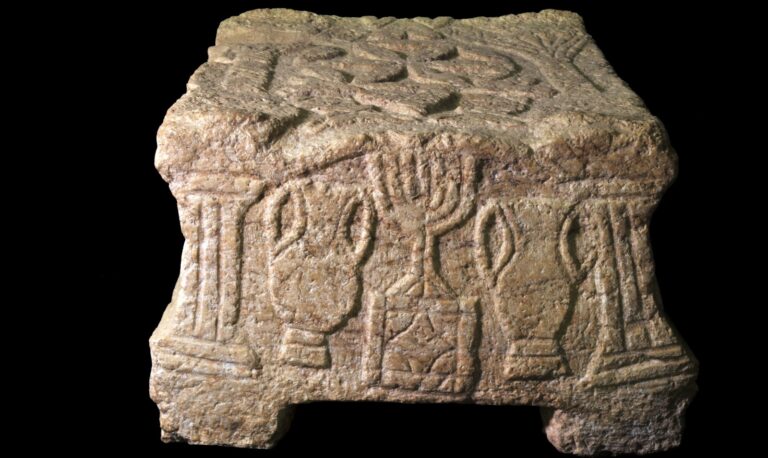 While the stone was being studied by experts, a replica was displayed at the archeological site of Migdal. Now, for the first time, the original stone is on display.

IAA researchers believe the stone was used as a table on which to open the Torah for public readings. The carvings, depicting the Jerusalem Temple and its vessels, were likely made by an artist who had seen the Temple in person. 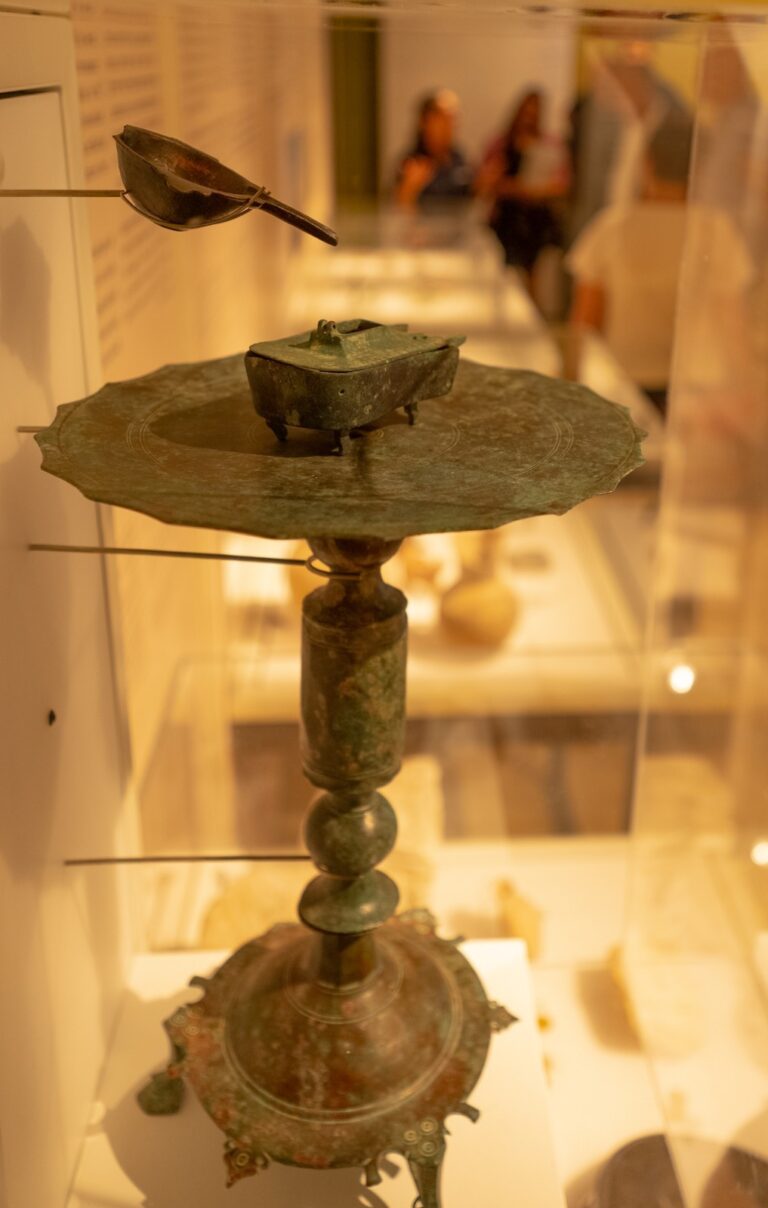 An ancient candlestick made by a metalsmith from Tiberias, exhibited in the Sanhedrin Train Exhibition. Photo by Adar Anaqi.

“The Sanhedrin Trail exhibition is unique not only because of the fascinating finds on display, but also because it provides a glimpse into the ‘behind the scenes’ of how the artifacts were found,” said Eli Escozido, director of the IAA.

All explanations appear in English, Hebrew and Arabic.

Escozido noted that the exhibit complements the Sanhedrin Trail hiking path inaugurated in 2017.

Stretching from Tiberias to Beit Sheʽarim National Park in the Lower Galilee, this interactive “smart” trail takes hikers back in history to the Second Temple period when the Great Sanhedrin—the supreme Jewish authority of sages—was active in the Galilee. 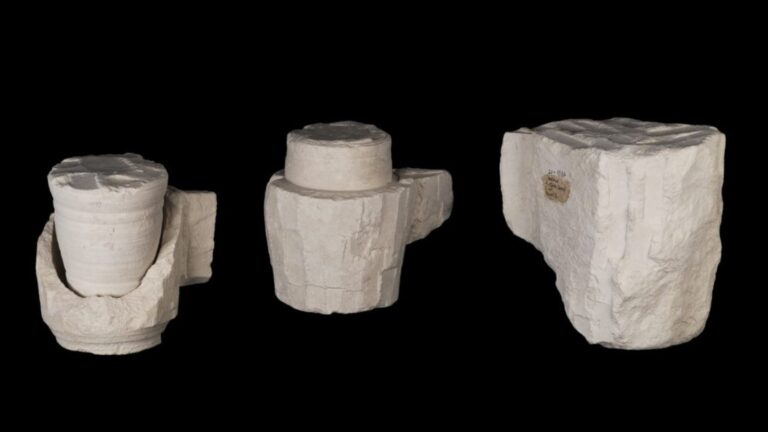 “The exhibition shows the people who found the artifacts in excavations and the various activities that were conducted during the preparation of the Sanhedrin Trail,” said Escozido.

“Visiting the exhibition and walking along the Sanhedrin Trail complement each other as a two-way road that allows us to travel in time into our own history and heritage,” he added.

The artifacts in the exhibition, many on display for the first time, reflect the flourishing of Galilee settlements in the Roman and Byzantine eras, when the Mishnah and Talmud—collections of oral Jewish law and lore—were being compiled in writing for the first time. 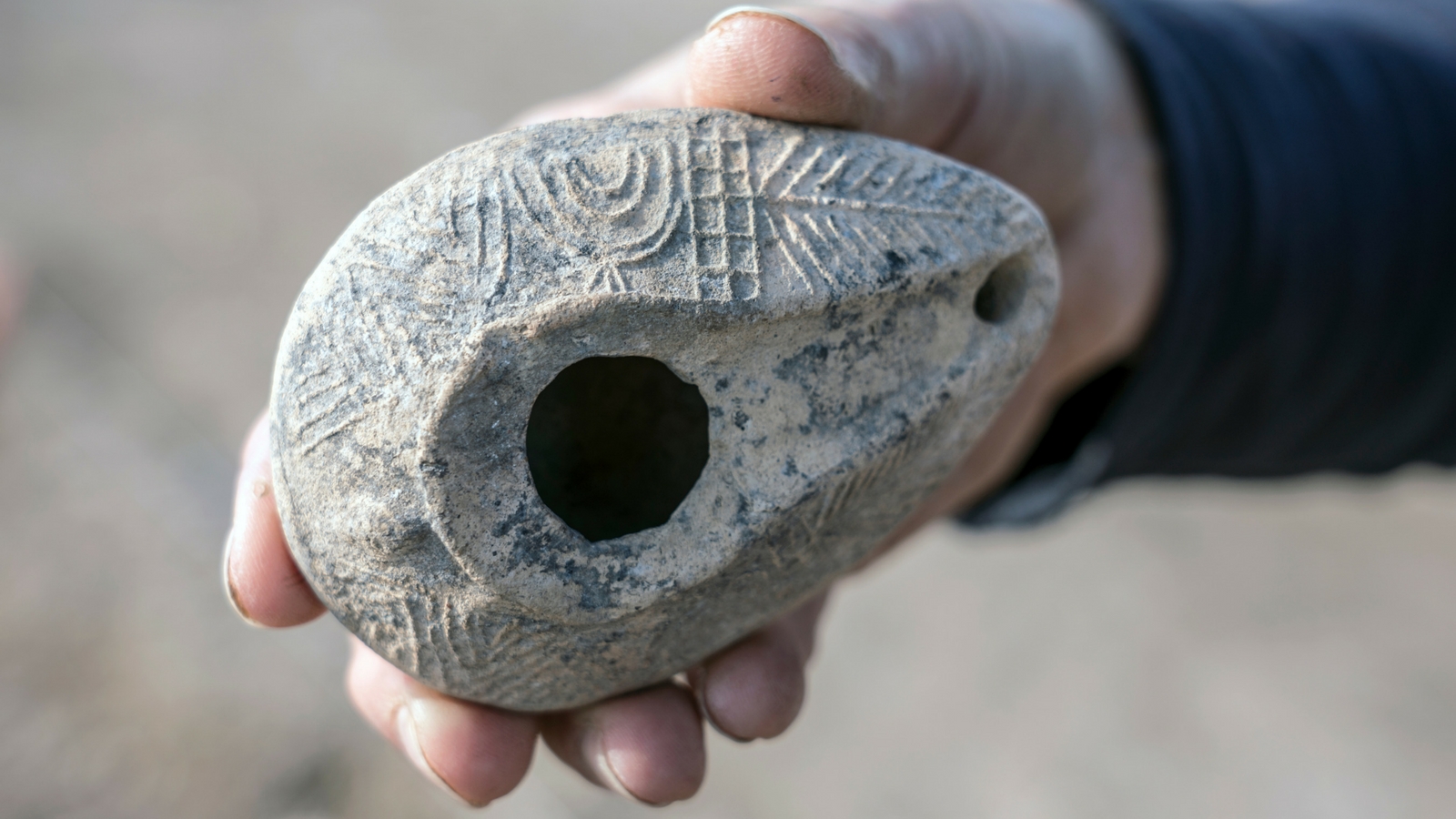 An oil lamp with the seven-branch menorah, found in Usha along the Sanhedrin Trail, on display at the Yigal Allon Center. Photo by Yaniv Berman/Israel Antiquities Authority.

The exhibition includes an oil lamp bearing the symbol of the seven-branched Temple menorah, as well as a hoard of silver and bronze coins, bronze and pottery figurines, and jewelry.

The Sanhedrin Trail exhibition is open Sunday to Thursday, 8 a.m. to 5 p.m. Groups can arrange to visit on Friday or Saturday. Contact: info@allon.org.il 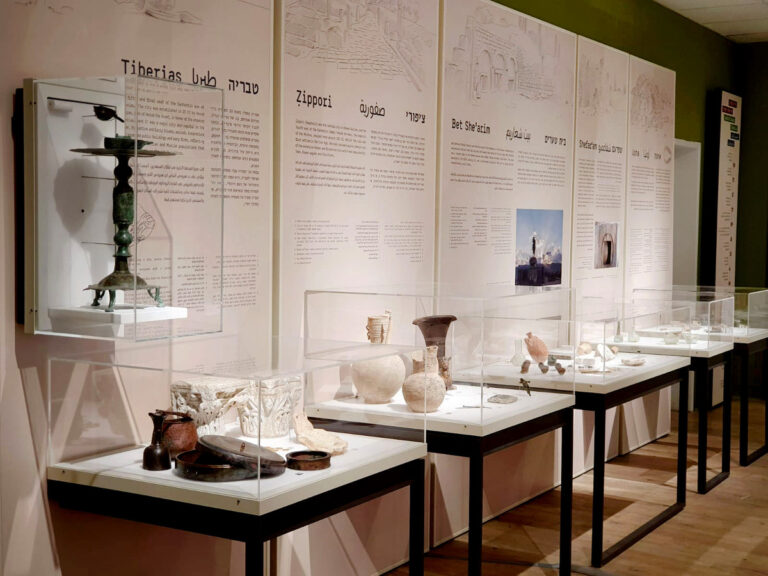 The Sanhedrin Trail exhibition at the Yigal Allon Center includes ancient artifacts from the five sites where the Great Sanhedrin was headquartered over time. Photo by Einat Ambar Armon/Israel Antiquities Authority.