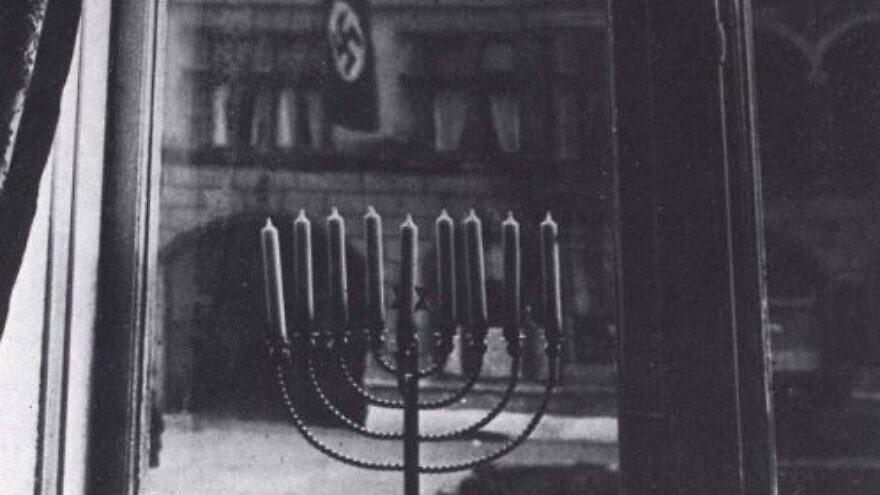 (December 20, 2022 / JNS) A brass menorah from a famous photograph taken during the rise of the Nazis made its way back to Germany for a Hanukkah candle-lighting ceremony in Berlin attended by the country’s president.

“Each of us must stand up against every form of antisemitism,” he continued. “No one must look away. And our state, our authorities must be vigilant, and relentless in prosecuting crimes.”

During Hanukkah in 1931, Rachel Posner, wife of Rabbi Akiva Posner, photographed the family menorah on the window ledge of the family home in the north German port city of Kiel.

In the background can be seen the Nazi party’s regional headquarters with a large swastika flag.

On the back of the photo, which came to stand for the looming threat to European Jewry, Rachel Posner wrote: “‘Death to Judah.’ So the flag says. ‘Judah will live forever.’ So the light answers.”

Akiva Posner, who also had a doctorate from Halle-Wittenberg University, was the last rabbi of Kiel’s Jewish community before the Holocaust, according to Yad Vashem’s website.

After publishing a letter of protest in the local press expressing anger at posters in the city declaring: “Entrance to Jews Forbidden,” the rabbi was “summoned by the chairman of the local branch of the Nazi party to participate in a public debate. The event took place under heavy police guard and was reported by the local press,” according to Yad Vashem.

Yehuda Mansbach, the couple’s grandson, “wept openly” after lighting the candles at Bellevue Palace, the official residence of the president of Germany, on Monday evening.

The Posners’ granddaughter, Nava Gilo, 68, also attended, telling AFP it was a “big honor” to be welcomed by the president.

“We came because it is an educational mission for us. We are very glad that we came, to meet all the good people. Many people in Germany, like us, want to make sure that something like the Holocaust never happens again.”