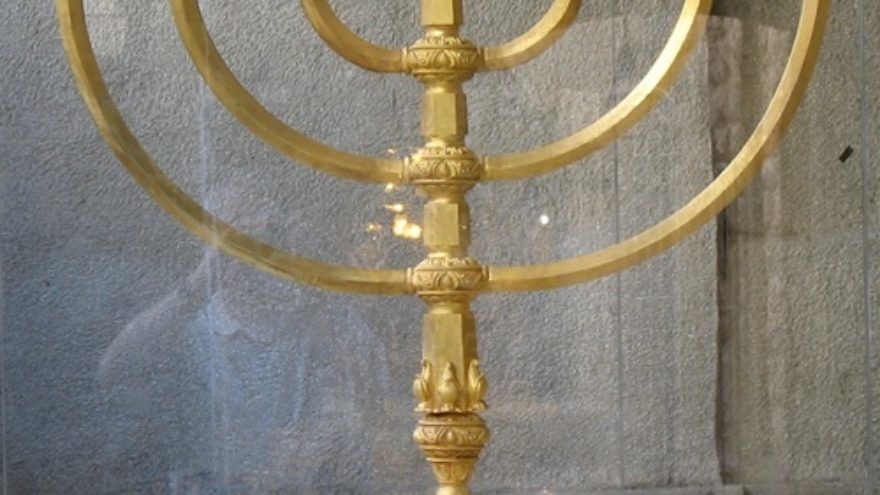 From its first mention in the book of Exodus, the menorah has pervaded the literary and visual culture of the Jewish people, predating the Star of David as a uniquely Jewish insignia by at least a millennium. In fact, one rabbinic tradition suggests that the emblem on David’s shield was not a star at all, but a menorah! While the star is the centerpiece of Israel’s flag, the menorah was chosen as the nation’s coat of arms, and large, ornate menorahs grace both the Knesset and Ben Gurion Airport. Countless Jewish organizations, schools and synagogues weave the menorah image into their logos, and many have taken the word as their names. What is the story of this potent symbol, and why has it captured the hearts and imaginations of the Jewish people for so long?

Most people, including U.S. presidents, come across the menorah primarily on Hanukkah. The technical name for the eight-branched candelabras lit each night of Hanukkah is hanukiyah, a modern-Hebrew word. The word menorah is used colloquially for these ritual objects, but technically refers only to the seven-branched golden oil lamp meticulously described in God’s instructions to Moses regarding the building of the Tabernacle.

References to the menorah appear throughout the bible, though is it not clear that it always looked the same, or that there was always just one in the temple; I Kings tells that Solomon had ten golden menorahs made for his temple. Nevertheless, there is ample indication that a menorah existed in one form or another throughout the First and Second Temple periods. The iconic image found on the Arch of Titus in Rome, depicting the menorah and other temple objects being carried away as the spoils of Roman victory over Judea, confirms that a seven-branched menorah was a part of Temple worship up until the end. Yet the whereabouts of the final menorah of the Second Temple remain a great mystery.

In his beautifully written work, The Tree of Light: A Study of the Menorah, L. Yarden suggests that the concept and form of the menorah are likely to have derived from the ancient mythological idea of the Tree of Life, found in different forms throughout the cultures of the ancient middle east. Images of sacred seven-branched trees guarded by cherubic figures can be found on Persian pottery dating back to 2300 BC, well before the centralization of Temple worship in ancient Israel. The almond tree, which is native to Israel and has special significance in Jewish lore and ritual, may have been the original inspiration for the menorah’s upward sloping design. It is quite possible that the menorah represents a blending of the Tree of Life idea with another important Israelite symbol of the divine presence, the luminous, ever-burning bush encountered by Moses. Indeed, the tradition surrounding the menorah tells that it was tended to day and night by the Temple priests so as to stay continuously lit, the original “Eternal Light” found in today’s sanctuaries.

Whereas, Yarden explains, the Star of David is never mentioned in canonical Jewish texts, nor does it appear on Jewish monuments before the Middle Ages, the menorah image can be found wherever Jews lived since the fall of the Second Temple, all across Europe and Asia. Synagogues built between 200 and 700 CE in Israel and beyond commonly sport menorahs carved into stone reliefs and laid into floor mosaics. Menorahs also adorn large numbers of Jewish gravestones from the throughout the post-Temple period, both within Israel and at various locations around the ancient Roman Empire: Sicily, Sardinia, Malta, and Milan, as well places in Spain, Portugal, France, and Greece. Yarden’s book offers dozens of examples of the centrality of the menorah in Jewish art and architecture past and present, including vivid photographs of original ancient pieces.

Jewish thinkers through the centuries have been drawn to the power and beauty of the menorah image and its effortless fusion of the natural with the man-made, of form with light. To Zechariah it was beacon of the future redemption of Israel; to Josephus it represented the seven known planets that illuminate the cosmos; for Philo it manifested the light of divine wisdom; in the Zohar, it holds the primordial light of the ein sof, from which all being emanates; for Herzl, a metaphor for the possibility of Jewish national renaissance. Today, the menorah continues to capture the imaginations of rabbis and laypeople, artists and thinkers, religious and secular, an enduring symbol of eternal hope.