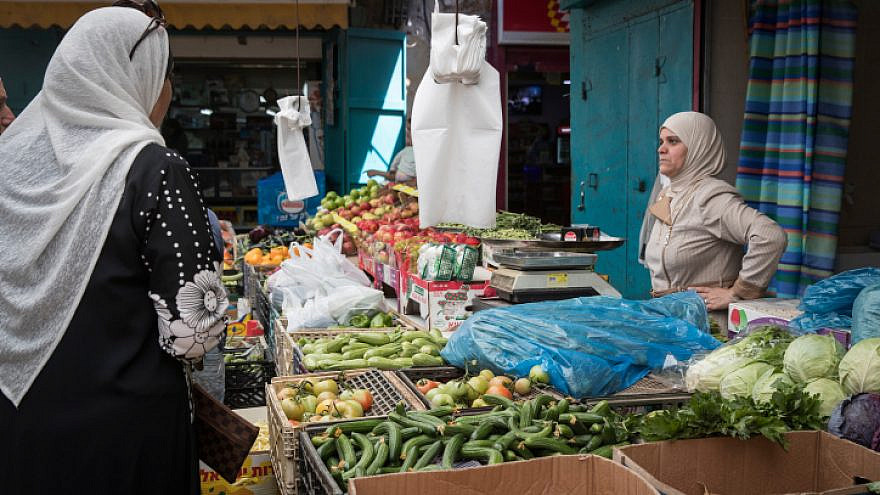 Arab Israelis at the market in the Old City of Acre on April 28, 2017. Photo by Nati Shohat/Flash90.
Spread the word.
Help JNS grow!
Share now:

(January 3, 2021 / Israel Hayom) Israeli Prime Minister Benjamin Netanyahu said on Friday that he hoped to make significant inroads among Arab-Israeli voters—a demographic traditionally not seen as favorably disposed towards the Likud Party and its leader—as part of his election campaign.

Netanyahu, who will be able to reserve six slots on the Likud’s Knesset slate for appointments of his choosing, said that he was considering holding one of them for an Arab legislator, whom he may name as Likud’s first-ever Arab minister.

In a press briefing after meeting with the Umm al-Fahm resident who became the millionth Israeli to be vaccinated against the coronavirus, Netanyahu said he believes that the Arab vote held “tremendous potential” for him.

“For many, many years, the Arab public was outside the mainstream,” said Netanyahu. “Why? For no reason. Be part of Israel’s complete success. This is what I would like to see in the next election.

“Over the past 15 years, I have brought NIS 1 billion ($311 million) [in budgets] for Arab communities to bridge gaps—more than any other government. I’ve opened nine police stations in the Arab sector to fight crime. Did I do it expecting votes? I do it because I believe in it,” he said.

The Likud, he stressed, “has nothing against Arabs; we oppose Arab parties that don’t recognize Israel. I’ve produced four peace deals with Arab countries, and now you see Jews and Arabs hugging in Dubai. Why can’t that happen here? Why can’t you [Israeli Arabs] be part of the ruling party? Why vote for radical parties that do nothing for you? Vote for us. Vote for me.”

Ra’am Party leader Mansour Abbas, who has recently emerged as an unexpected ally of the prime minister’s, welcomed Netanyahu’s comments.

“I was happy to be the first to identify and lead the change in the perception of politicians on the Israeli right towards Arab society, from having a hostile attitude to one that places them at the center of political discourse ahead of what is likely to be complex election campaign,” he told local radio station Galei Israel.

“For months, I have been accused of being a traitor and a collaborator, and for ripping the Joint Arab List apart, but we are willing to meet in the middle with whomever is willing to do the same with us. Right now, there is one prime minister running this country.”

Abbas did, however, advise Likud “to focus on its own base. The Arab public will vote for those repressing [that base], especially when I am willing to sacrifice myself for it by getting into the fray.

“Comments on social media are horrible. I want to believe that no one will try to hurt me. We all know what happened when there was a prime minister they called a ‘traitor.’ I challenge the criminal organizations and I work to eradicate them. I’m willing to sacrifice myself for my society.”

New Hope leader Gideon Sa’ar also criticized Netanyahu, saying “after years of inaction and failures, the prime minister has finally come around to talking about a plan to eradicate crime in Arab society. It is unfortunate that this issue was of no interest to him.”

Sa’ar on Wednesday visited the city of Lod, where he addressed Arab residents who have been suffering from a serious crime wave.

“What is happening here in Lod, in the center of the country, is utterly disgraceful,” he said, pointing to what he called the “loss of any sense of personal security for the residents, the violence that manifests itself in many forms and the use of illegal weapons, which is extremely common in the Arab sector.”

This, he stressed, “undermines the very foundations of our existence here, not only in Lod but also in the Negev and the Galilee. … Israel carries out much more complex tasks far beyond our borders, and there is no reason for Israeli citizens here in Lod to live in an ‘extra-territorial’ territory where the laws of the state and law and order do not apply.