(November 4, 2021 / JNS) When Jonah Adelsberg completed the last of his 10 half-marathons in Miami, he considered his future running options. “I was thinking ‘that’s it,’ then realized I had more gas in the tank,” the 28-year-old Long Island native reports. He decided that he would apply to run in the 2020 TCS New York City Marathon. He was accepted, but the race was postponed due to the coronavirus pandemic.

This Sunday, Nov. 7, Adelsberg, along with an estimated 33,000 runners, will finally have his chance to run 26.2 miles through all five boroughs—from Staten Island to Central Park as the race itself celebrates 50 years in the making.

Adelsberg’s journey to this year’s marathon started nearly 20 years ago to the day when, at 8 years old, he was diagnosed with non-Hodgins lymphoma. He recalls, “My battle came with lots of physical and emotional trauma, and my childhood was defined by constant therapies and checkups.”

He also notes the toll his illness took on his sister and feels that having “a real support system for me and for my family really helped get us through it.” He attributes much of this care to Chai Lifeline, which “supported me and my family in every way possible.”

He says that at that time, pediatric cancer wasn’t something really talked about publicly. Chai Lifeline helped his parents find the best doctors and helped rally the community around his family. 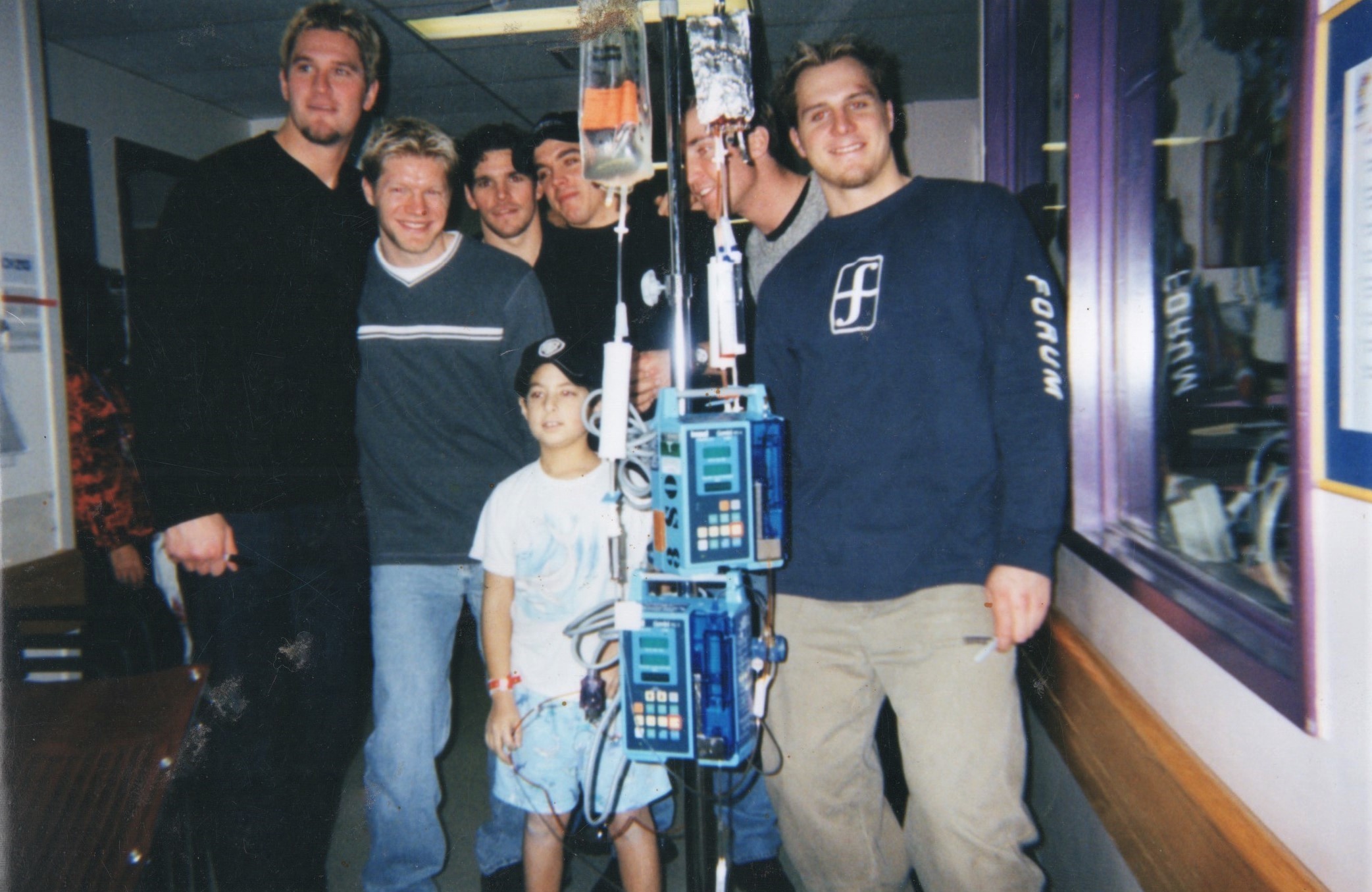 Jonah Adelsberg as a child being treated at the hospital, where he gets a visit by members of the New York Islanders hockey team. Credit: Courtesy.

Adelsberg, currently in charge of Strategic Partnerships and Marketing at Safe and Sound Studios in Brooklyn, N.Y., has dedicated his marathon run to raise funds for Chai Lifeline, the international health network that provides a network of support services for children and families facing serious illness and other challenges. “You hear stories these days that funds are spread really thin because of COVID-19. There is a real need to help children and family members now,” reports Adelsberg, who is sensitive to the financial burden that having a serious or life-threatening disease can have on a family.

As a child, Adelsberg attended Camp Simcha, Chai Lifeline’s summer program for children with cancer and other serious illnesses. He and his sister also worked at Camp Simcha as counselors.

Over the years, he and his father have run numerous half-marathons with Team Lifeline, Chai Lifeline’s endurance-training program, raising more than $100,000 for the organization. “I was one of the lucky ones to be able to get to this point,” says Adelsberg. “If I’m able-bodied enough to raise money by doing something I love, that is an honor for me to do this.” Jonah Adelsberg with his father, Howard Adelsberg, after the Half-Marathon in Miami. Credit: Courtesy.

Adelsberg says he will be thinking of those kids and his journey as he winds the famed course through the entirety of New York City. “My experience reminds me that it could always be worse, and that’s important to remember others—not just for those of us who’ve fought cancer but for everyone. When I run, it’s not because I love running, even though I know how important exercise is. It’s because I know that I’m doing this because, in life, we are truly warriors and fight whatever struggles are thrown our way.

“That’s why I’ll be there,” he emphasizes, “and that’s what I hope will push me forward towards that finish line.”

‘A way to express my gratitude’

Californian Yitzi Teichman, 24, will also be running in this Sunday’s New York City Marathon, and he, too, will support Chai Lifeline.

After the diagnosis of a brain tumor at the age of 17 and a complex 14-hour surgery, he eventually attended Camp Simcha. After that summer experience, Teichman spent three months in treatment and therapy in Boston, saying that within a year, he was “pretty much back to my pre-cancer self.”

Always an athlete, Teichman viewed running as a way to prove mentally and physically that he was well on the road to a full recovery. In January 2015, he completed a half-marathon in the Miami Marathon with Team Lifeline.

Teichman, an administrator of a 185 resident psychiatric facility in Los Angeles, credits Chai Lifeline with giving him and many others like him the tools and support to get through illness. “When you are diagnosed with a serious disease, you kind of become an outcast or some sort of foreign creature. People treat you differently; it’s as if they’re always scared to say the wrong thing. I know that doesn’t come from a bad place, but it leaves you feeling that much more helpless, and the truth is, then you feel even sicker. With my Chai Lifeline friends and at Camp Simcha, I was treated normally again.” Teichman notes that much of his motivation to take part in his first full marathon comes from recognizing how blessed he has been with his recovery. “My experience with cancer has exposed me to so many friends who have passed away or lost their ability to walk, and others whose diseases messed up their lives physically and mentally. I feel so lucky to be where I am, and running for this organization is a great way to express my gratitude.”

‘One of the ultimate athletic events’

Rabbi Simcha Scholar, CEO of Chai Lifeline, is proud of Adelsberg, Teichman and everyone connected to the Chai Lifeline family.

“The New York City Marathon represents one of the ultimate athletic events in the world today, and it is heartwarming to see how some of our past Chai Lifeline kids have reached this point and are able not just to run the race, but to dedicate their experience to helping others,” he says. “We are deeply grateful to all those who join and support Team Lifeline, and help enable us to better the lives of countless children and families.”

The 2021 TCS New York City Marathon kicks off at 8 a.m. with the professional wheelchair division, followed by the hand-cycle category and select athletes with disabilities. They are followed by professional women who take off at 8:40 a.m., professional men at 9:05 a.m. and five waves of runners. Participants start in Staten Island, proceed north through Brooklyn and Queens, west across the Queensboro Bridge into Manhattan, up to the Bronx and then south into Manhattan and Central Park.

Due to the ongoing pandemic, the number of competitors this year has been limited to 33,000, significantly fewer than the 53,639 participants who completed the 2019 race, the last time the marathon took place. That year, participants came from 140 countries, completing the course in an average time of 4:33:52 and raising some $45 million for charity.