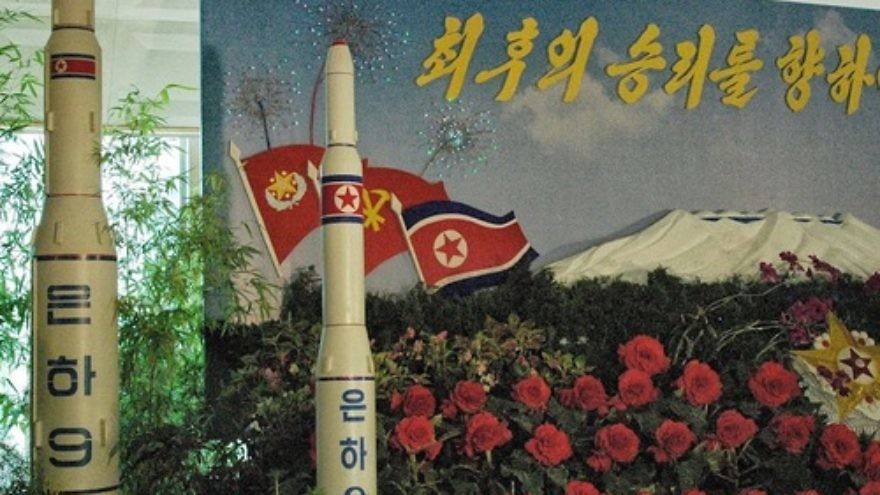 (May 17, 2016 / JNS) North Korea has provided the technology or weapons for Hamas’s cross-border attack tunnels from Gaza to Israel, Hezbollah’s Scud-D missile stockpile in Lebanon, and Iran’s Fordow nuclear facility. Yet the totalitarian state in East Asia doesn’t seem to frequently enter the Western public discourse on Middle East threats.

With the January 2016 North Korean nuclear test, which represented a significant advance in North Korea’s strike capability and the fourth time the nation has exploded a nuclear device, analysts such as Dr. Bruch E. Bechtol—the author of four books on North Korea and a political science professor at Angelo State University in Texas—say it is time for the United States to pay closer attention to the rogue state’s military proliferation in the Middle East.

Bechtol explained that North Korea has played a key role in the buildup of Iranian and Syrian forces, as well as the forces of the Iranian-funded Lebanese terror group Hezbollah. The five-year-long and ongoing Syrian civil war has meant a huge loss of military equipment for President Bashar al-Assad’s regime, and North Korea has filled the void with T-55 tanks, trucks, rock-propelled grenades, and shoulder-fired missiles.

“The Assad regime has fired lots of Scuds…and chemical weapons. All of these came from North Korea,” Bechtol told JNS.org.

Regarding the terror tunnels that Gaza-ruling Hamas has dug in order to carry out attacks inside of Israel, Bechtol said the tunnels’ “concrete reinforcements” resemble the characteristics of North Korean structures.

The fear now is that North Korea will transfer its nuclear-enrichment technology to Iran, and will hand over its bomb designs to the Islamic Republic or tell Iran how to fit a bomb on the delivery mechanism of a ballistic missile, said Simon Henderson, the Baker fellow at The Washington Institute for Near East Policy and director of the institute’s Gulf and Energy Policy Program.

According to Bechtol, Iran and North Korea have been closely collaborating since as early as the 1980s. North Korea supplied Iran with Scud B-missiles, artillery, tanks, and trucks during the 1980-1988 Iran-Iraq War.

Since then, he said, North Korea has sold Iran Scud-B, Scud-C, and Scud-D missiles, as well as extended-range scuds. According to Bechtol’s research—a combination of media reports, U.S. intelligence, government sources, the work of other academics, and testimony from North Korean defectors—North Korea helped Iran build the Safir two-stage missile and the Sejil solid-fuel missile. He said that between 2014 and today, at least two North Koren shipments of long-range missile parts arrived in Iran.

Bechtol pointed to a 2015 testimony by Dr. Larry Niksch, a 43-year veteran with the Congressional Research Service, before a U.S. House of Representatives committee hearing on the Iranian-North Korean strategic alliance. Niksch told the committee that since 2011, he has seen a “reverse flow” from Iran into North Korea, expanding Iranian investment of both personnel and funds in North Korea’s domestic nuclear and missile programs.

“Iranian money appears to be the lubricant for North Korea’s nuclear and missile programs,” Niksch told the committee.

“One has to be able to connect the dots,” Bechtol told JNS.org.

“[U.S. Secretary of State John] Kerry and crew left a loophole a mile wide when they effectively allowed Iran to conduct all the illicit work it wants outside of Iran, in countries like North Korea or perhaps Sudan,” Michael Rubin, an analyst at the American Enterprise Institute, told The Washington Times in September 2015.

Bechtol said that the Iranians are also seeking to put a nuclear missile on the Shahab-3, a medium-range ballistic missile, with the goal of targeting Israel.

Bechtol noted that because the governments of North Korea and Iran actually “don’t get along well,” their partnership is practical rather than ideological in nature. The combination of illegal weapons proliferation and other illicit sales of items such as cigarettes and drugs make up as much as 40 percent of North Korea’s economy. Therefore, Bechtol believes that targeting Pyongyang’s “dirty money” in several Asian banks—rather than going after North Korean weapons shipments—is the solution to the nuclear issue.

“If no U.S. banks will do business with these banks, North Korea will have to go elsewhere for the money and that will be a real crick,” said Bechtol, noting that similar American sanctions were effective in 2005.

“It snowballed all over Asia [in 2005], and the North Korean diplomats were carrying suitcases of cash to Mongolia to launder the money.…This is what will slow down nuclear proliferation in the Middle East,” he said.