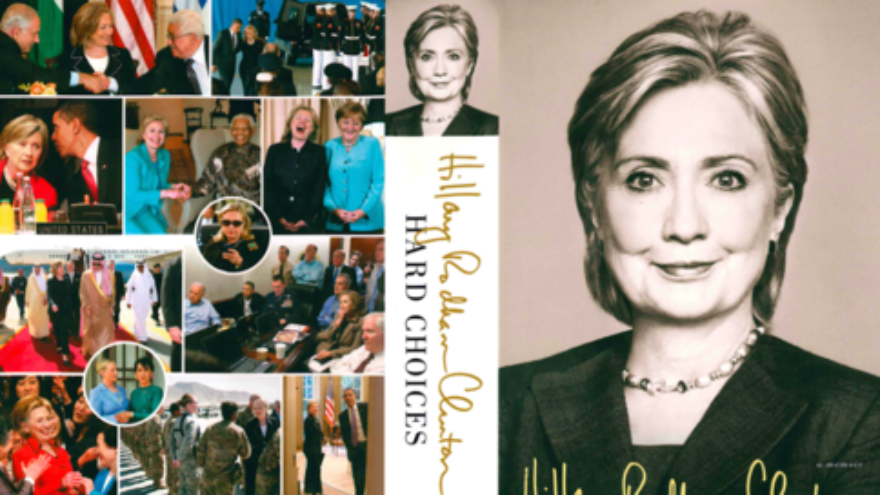 “Hard Choices,” the title of a recently released foreign policy memoir by former U.S. Secretary of State Hillary Rodham Clinton, comes across as surprisingly ironic. While dedicating a chapter of her 656-page autobiography to the Israeli-Palestinian conflict and peace negotiations, Clinton, even in her own words, appears to be a passenger in peace efforts rather than a driver of them.

As with most U.S. politicians aspiring to high office, Clinton is diplomatic on the subject that for more than a half a century has been seen by successive presidential administrations as the holy grail of diplomacy—resolving the Israeli-Palestinian conflict.

As expressed here, Clinton’s views on the conflict are typical for a high-ranking American politician. Her answer: a two-state solution based on 1967 borders with equitable land swaps, a Jerusalem divided between Israel and a future Palestinian state, security arrangements, and an end to settlement building by Israel in the Palestinian territories. Clinton tries very hard in this book to be complimentary and critical toward Israel and the Palestinians in equal measure.

“… I deeply admired the talent and tenacity of the Israeli people. They had made the desert bloom and built a thriving democracy in a region full of adversaries and autocrats,” writes Clinton, describing her first trip to the region near the end of her husband Bill Clinton’s first term as Arkansas governor. “… [I]n the West Bank, I got my first glimpse of life under occupation for Palestinians, who were denied the dignity and self-determination that Americans take for granted.” She goes on to claim that she was an “early voice calling publicly for Palestinian statehood,” even before the George W. Bush administration made it official U.S. policy in 2001.

Clinton maintains this sentiment throughout the book’s Israel chapter, while at the same time invoking the “demographic crisis” motif often used by diplomats to coax the Jewish state into making concessions.

“Because of higher birth rates among Palestinians and lower birth rates among Israelis, we were approaching the day when Palestinians would make up a majority of the combined population of Israel and the Palestinian territories, and most of those Palestinians would be relegated to second-class citizenship and unable to vote,” she writes. “As long as Israel insisted on holding on to the territories, it would become increasingly difficult and eventually impossible to maintain its status as both a democracy and a Jewish state. Sooner or later, Israelis would have to choose one or the other or let the Palestinians have a state of their own.”

Most of the action in this section of Clinton’s book takes place in the final months of 2010, detailing efforts by Clinton and the administration to get Israeli Prime Minister Benjamin Netanyahu and Palestinian Authority President Mahmoud Abbas to sit down together for a conversation, which failed to produce any results. Clinton concedes that relations between Netanyahu and the Obama administration were tense during this period. At least in part, she blames her former boss for this, thereby absolving herself.

“For the Israelis, we requested that they freeze all settlement construction in the Palestinian territories without exception. In retrospect, our early hard line on settlements didn’t work,” Clinton writes. “Israel initially refused our request, and our disagreement played out in public, becoming a highly personal standoff between President Obama and Netanyahu, with the credibility of both leaders on the line.”

Clinton writes that this demand hardened Abbas’s position at the negotiating table, as the Palestinian leader could now credibly argue that halting settlements was not simply a Palestinian demand but a precondition laid down by the United States and the White House’s official position. This move by the U.S. snatched a major bargaining chip out of the hands of Israeli negotiators.

Curiously, it wasn’t Clinton’s State Department, former U.S. senator and Special Envoy for Middle East Peace George Mitchell, or former Ambassador Dennis Ross insisting on this hardline stance on settlements, according to the book. Rather, it was Rahm Emanuel, the Jewish former White House chief of staff and onetime civilian volunteer with the Israel Defense Forces.

“[Emanuel]… had a deep personal commitment to Israel’s security. Drawing on his experiences in the Clinton Administration, he thought that the best way to deal with Netanyahu’s new coalition government was to take a strong position right out of the gate; otherwise he’d walk all over us,” Clinton writes. “Mitchell and I worried we could be locking ourselves into a confrontation we didn’t need, that the Israelis would feel they were being asked to do more than the other parties, and that once we raised it publicly Abbas couldn’t start serious negotiations without it.”

It seems that those consequences alone should have been enough for America’s top diplomat to vocally oppose the decision, but Clinton falls in line.

“… But I agreed with Rahm and the President that if we were going to revive a moribund peace process, we had to take some risks,” she continues. “So that spring I delivered the President’s message as forcefully as I could, then tried to contain the consequences when both sides reacted badly.”

Sales of “Hard Choices” have been underwhelming so far, even when compared to Clinton’s first pre-presidential campaign book, “Living History,” perhaps owing to the genre itself (foreign policy memoirs aren’t exactly beach reads) or Clinton’s failure here to stake out a new position of her own on the Israeli-Palestinian conflict. Readers will leave with the same impression with which they entered: Despite Clinton’s much-reported distancing of herself from the Obama administration, her attitude and policy remain nearly indistinguishable from those of Obama and the Democratic Party platform. In that regard, those hoping for a change in U.S. foreign policy toward Israel may be disappointed to discover that “Hard Choices” offers the same choices.