(May 3, 2022 / JNS) The purpose of Yom Hazikaron, Israel’s Memorial Day for fallen soldiers and victims of terrorism, which begins on Tuesday evening, is to pay tribute to and mourn all those killed while defending, or simply living in, the Jewish state. Though Christians and Muslims are among the casualties of the many wars that Israel has been forced to fight since well before its establishment—and ongoing assaults with which it continues to contend—Jews are both the main target and the majority of the dead.

It is for this reason that dozens of bereaved Jewish families are offended by this year’s Defense Ministry gift—awarded annually ahead of Memorial Day—and have announced their intention to return it. The present in question is a wall clock designed with Islamic and Christian symbols, but none relating to Judaism.

The only acknowledgment of the Jewish identity of the state is the word “Jerusalem” in Hebrew. Even the etched skyline of the capital only shows the Muslim Dome of the Rock and the church on the Mount of Olives—no Jewish holy sites or national monuments.

In addition, the outline of the clock’s face is dotted with Muslim crescents and five-point stars, representing the wounds of Christ and the pillars of Islam. The Star of David is glaringly absent, as is the menorah. Ditto for the Israeli flag and Israel Defense Forces’ emblem.

This was the complaint voiced by the widow of IDF Maj. Roi Klein, who was killed during the Battle of Bint Jbeil in the 2006 Second Lebanon War. Klein became a household name in Israel for having jumped on a live grenade to save the men in his command. 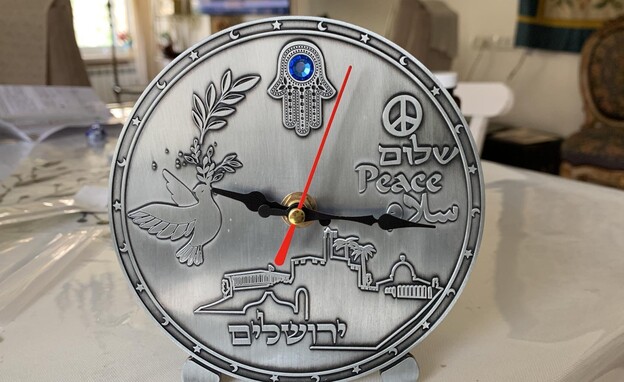 The “Peace Clock” given as a gift to Israel’s bereaved families ahead of Yom Hazikaron, May 2022.

As he flung himself on the explosive, which Hezbollah terrorists had hurled over a wall onto his unit, he shouted the Jewish prayer Shema Yisrael (“Hear, O Israel, the Lord is our God; the Lord is one.”)

After it blew up and he lay dying, he radioed headquarters to announce his own demise. “Klein’s dead, Klein’s dead,” he said with his last breath. He then handed the transmitter, and transferred charge of the troops, to a fellow officer.

His is one of the countless tales of bravery and sacrifice that will be recounted at Memorial Day ceremonies around the country. His survivors and other grieving spouses, parents and children are right to be disgusted with a token of appreciation that places all nationalities and religions on a par with—or, in this case, beneath—Israel’s.

The Defense Ministry argued that it was bereaved families themselves—members of the Public Council for Soldiers’ Commemoration—who selected the gift. They chose the “Peace Clock” this year, the ministry said, “as a symbol of the state’s desire for peace and brotherhood with our neighbors, in Hebrew, English and Arabic.”

Herein lies the greater problem with the memento: that it portrays a fantasy for the future, rather than the harsh reality in which Israelis exist. While bereaved families and other Israelis may cling to such a dream of “peace and brotherhood,” Memorial Day isn’t the occasion to highlight it—certainly not now, with a surge in terrorism and open calls for the killing of Jews, including by Israel’s Arab citizens.

Fifteen names were added to the Yom Hazikaron body count in April alone, the month of Ramadan. And Israeli security forces have been running around like chickens with their heads cut off, scrambling in all directions to thwart rocket, rifle, vehicle, knife and firebomb attacks actually taking place, as well as those promised by Palestinians and Arab Israelis for “Nakba Day,” the “catastrophe” of the Jewish state’s birth 74 years ago.

The “Peace Clock” makes of mockery of this situation and all the blood spilled by Israel’s enemies throughout the decades. Indeed, the time is anything but ripe for refrains of “Kumbaya.” The only song that Israelis and Jews the world over should be singing loudly this week is the anthem “Hatikvah.”

Ruthie Blum is an Israel-based journalist and author of “To Hell in a Handbasket: Carter, Obama, and the ‘Arab Spring.’”