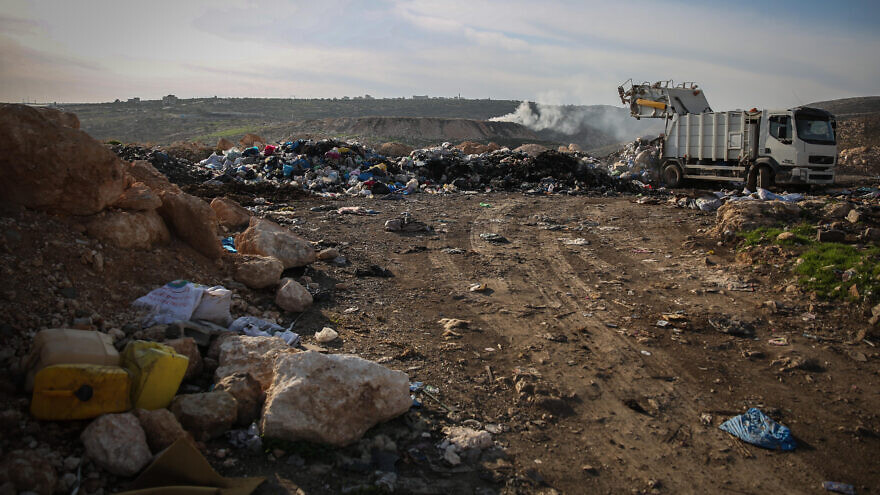 This isn't the first time that garbage has been an issue. Here, dumping outside the Palestinian village of Rammun, Dec. 8, 2014. Photo by Hadas Parush/Flash90.
Republish this article
821 WORDS
Spread the word.
Help JNS grow!
Share now:

(July 6, 2020 / JNS) Exploiting the furlough of Israeli Civil Administration inspectors during the coronavirus shutdown in March and April, convoys of Palestinian Authority municipal garbage trucks have been dumping thousands of cubic meters of refuse from the towns of Ramallah and El Bireh into the Binyamin Region’s Tarrifi Quarry, just outside the Jewish communities of Kochav Ya’akov and Psagot.

Regavim released video and photo documentation this past week of the ecological crimes being carried out by the P.A. at the site.

An Israeli NGO that promotes Zionist land use and strives to protect Israel’s precious natural resources, Regavim says that the illegal dumping has created a foul stench, with the potential of waste seeping into the earth and polluting groundwater, while at the same time has caused an eyesore, which defiles the landscape.

According to Regavim’s calculations, more than 10,000 cubic meters of garbage have been dumped illegally since the start of the coronavirus crisis. The quarry is located in a very central spot alongside Route 60, the main traffic artery in the region, and is visible from almost every angle along the route.

Naomi Kahn, international division director of Regavim, told JNS that the P.A. decided simply to dump the garbage into the quarry while nobody was looking since it is “a cheap way of disposing of it, instead of burying it, sorting or treating the waste.”

But now that Israeli Civil Administration inspectors are back to work, Kahn also levies blame at the Jewish state for not stepping in as the illegal dumping continues. She says the situation is a “combination of an environmental catastrophe, a serious impact on health and quality of life, and a complete breakdown of law enforcement. Israel should be doing its job in the areas under its jurisdiction, but our official enforcement bodies are fast asleep.”

A statement by Regavim added that “to make matters worse, the area near the dumping site has seen repeated incidents of garbage incineration, apparently in an effort to reduce the enormous quantity of garbage that has accumulated there in recent months. The fires only add to the pollution caused by this pirate ‘waste removal’ enterprise, operating without oversight or adherence to environmental and health protocols.”

The Regavim statement continued, “We find it implausible that the Palestinian Authority managed to hide thousands of trucks dumping garbage over the side of a cliff along a major highway for weeks on end. In other words, the authorities’ ‘blindness’ is selective. They’ve chosen not to see what is happening here. But we haven’t resigned ourselves to this situation. We continue to hope that they will wake up, sooner rather than later, and put an end to this disgrace.”

The spokesperson for the Coordinator of Government Activities in the Territories (COGAT), which is the umbrella of the Civil Administration, said that it is well aware of the illegal dumping and vowed to take action.

The same response via email added that “we will continue to work for the elimination of environmental hazards in Judea and Samaria,” while protecting nature and the environmental quality of life for the benefit of the entire area’s residents.

Binyamin Regional Council Head Yisrael Gantz responded to the illegal dumping, telling JNS that “this is an ecological terror attack. It seems that taking care of the natural resources of this area is of no concern to the Palestinians, even though the pollution harms all Jews and Arabs alike. The State of Israel must take responsibility and show its concern for a clean and safe future when it comes to the environment.”

He added that “I am confident that all of the environmental and green organizations will join the fight, and call on the Defense Minister and the head of the Civil Administration, along with the Ministry of Environmental Protection, to work hard to prevent these types of incidents.”

Kahn said that the bottom line is, “We want the Civil Administration to be held responsible and remove the garbage in order to return the area to its previous condition. If a person on a hike in Israel throws away a cigarette and is caught, it’s a 750 NIS fine. The P.A. has dumped thousands of kilos of raw garbage and has not been fined or held responsible. We want that to change.”