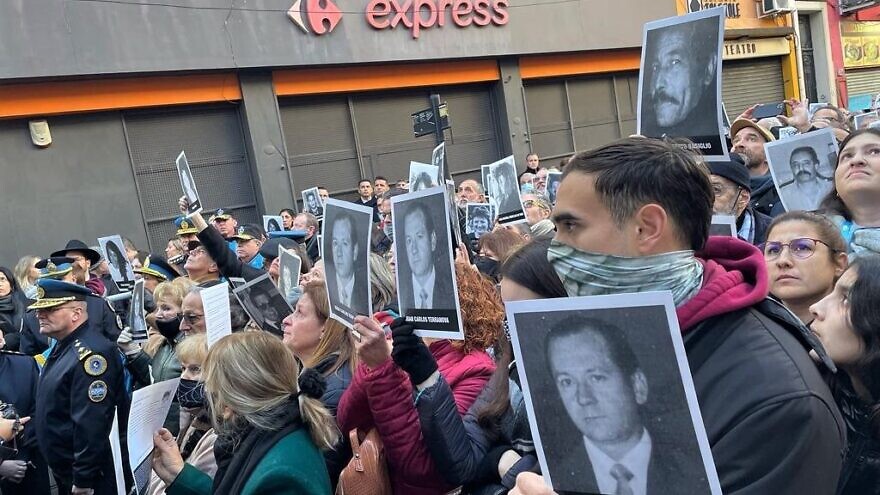 Thousands of people attended a memorial event in Argentina dedicated to the 85 people killed and more than 300 others injured during the 1994 AMIA bombing in Buenos Aires, on July 18, 2022. Photo by Ellie Cohanim.
Republish this article
789 WORDS
Spread the word.
Help JNS grow!
Share now:

(July 22, 2022 / JNS) The deadliest post-Holocaust attack on Jews was an outside job. While commemorating the 1994 AMIA bombing this week, those fighting Jew-hatred in Latin America vowed not to let homegrown anti-Semitism go unchecked.

The second Latin American Forum for Combating Anti-Semitism met this week in Buenos Aires, in conjunction with the 28th anniversary of the suicide bombing of the Argentine Israelite Mutual Association (AMIA) Jewish community center. The July 18 attack, which killed 85 people and wounded 300 others, is largely believed to have been carried out by Hezbollah, with Iranian backing.

The World Jewish Congress and its Latin America branch, together with the Israeli Ministry of Foreign Affairs, the Latino Coalition for Israel and a host of other organizations co-hosted this year’s forum, six years after the initial edition. The forum featured more than 300 participants from every Latin American nation except Nicaragua, along with American and Israeli officials, and various Christian and Jewish leaders, in an attempt to coalesce efforts against anti-Semitism across the region. Former Guatemalan President Jimmy Morales attended, as did the president of Colombia’s Constitutional Court Dr. Cristina Pardo, together with deputy ministers, parliamentarians and journalists.

Pastor Mario Bramnick of the Latino Coalition for Israel told JNS that the forum was broadly attended and productive, including by 40-plus governmental leaders.

He said an additional focus will be placed on the adoption of anti-BDS laws in Latin America and concerns about recent changes in regional governments.

‘We have similar enemies’

Ruth Cohen-Dar, the Israeli Ministry of Foreign Affairs’ director of the Department for Combating Anti-Semitism, told JNS that while scenes of violence against Jews are not as common in Latin America as what is seen in other parts of the world, it is no less concerning.

“The focus is more on social media, more on the desecration of cemeteries and synagogues. This is a part of the world that is far physically from Israel, but not distant from our point of view,” she said. “The government of Israel is focused on every community in the Diaspora.” 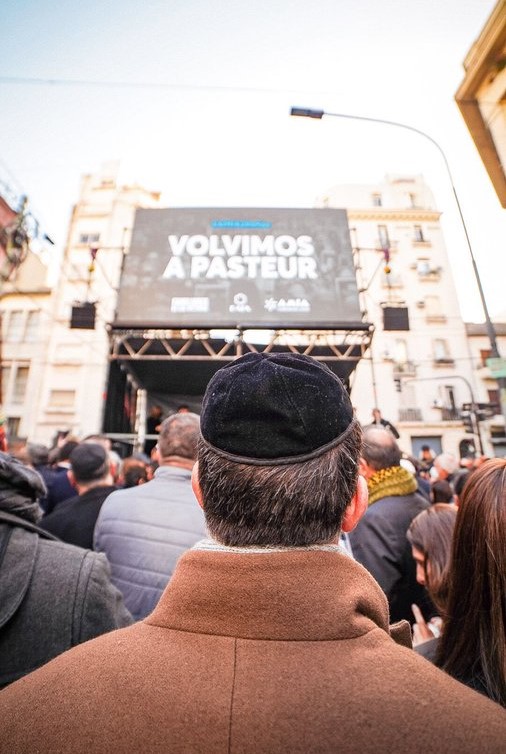 Thousands of people attended a memorial event in Argentina dedicated to the 85 people killed and 300 others injured during the 1994 AMIA bombing in Buenos Aires, July 18, 2022. Source: Twitter/The Israeli Foreign Ministry.

World Jewish Congress president Ronald S. Lauder addressed the forum by video, urging government leaders to not only pass more anti-hate legislation but to enforce it.

“Every country should appoint an anti-Semitism commissioner to formulate national policies to counter Jew-hatred,” he said. “Every government body, both local and national, should have strong laws against hate crimes and hate speech. And most important, these laws must be enforced. Every elected official should be crystal-clear that they stand with the Jewish people.”

Both Bramnick and Cohen-Dar noted the importance of the multifaith effort to combat Jew-hatred in the region.

“We feel that there have been great alliances in the last decade between Christian and Jewish organizations, and leadership of the pro-Israel movement. Those alliances should be utilized now in combating anti-Semitism together. Anti-Semitism is not just anti-Jewish. It is anti-Christian, anti-Western values, anti-Judeo-Christian values,” said Bramnick. “Those forces are also a concern for Christians. We have similar enemies.”

The forum also brought together heated soccer rivals. The presidents of the popular River Plate and Boca Juniors clubs signed a commitment to combat hate in soccer with both pledging to adhere to the IHRA definition. They were greeted on stage by Cohen-Dar, who received the jerseys of both rivals.

She noted that will “put the IHRA definition on the agenda for millions of people. Those clubs have tens of millions of followers in Argentina, and their players have declared a commitment to promoting coexistence, and fighting anti-Semitism and hate.”

While weeks ago, Argentine Ambassador to the United States Jorge Argüello announced that his country would create a position charged with combating anti-Semitism, multiple Argentine governments have failed to bring those responsible for the AMIA bombing to account with past allegations of a government cover-up adding to the frustration of victims’ families. Some of them gathered in Buenos Aires on Monday for a memorial service, which was also attended by bombing survivors, members of the Jewish community, members of the security forces, U.S. State Department Special Envoy to Monitor and Combat Anti-Semitism Deborah Lipstadt and U.S. Ambassador to Argentina Marc Stanley.

Multiple sources told JNS that no Argentinian government officials were spotted while clarifying it didn’t mean there were none in attendance.

In 2020, Argentine President Alberto Fernández reaffirmed his government’s commitment to bringing to justice those responsible for the attack.