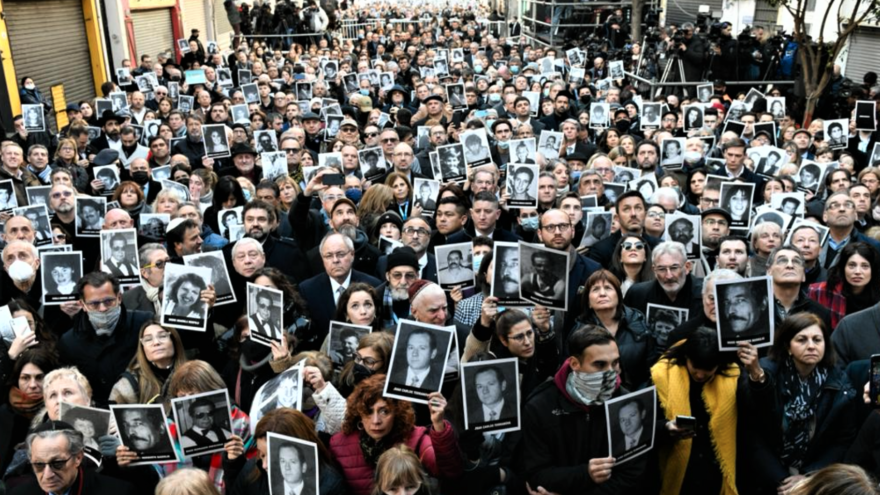 (July 18, 2022 / JNS) Thousands of people attended a memorial event in Argentina on Monday dedicated to the 85 people killed during the 1994 AMIA bombing in Buenos Aires. They came to read the names of the victims, recall the harrowing stories from the day and demand justice for the victims.

On July 18, 1994, at around 10 a.m. local time, a van laden with explosives destroyed the Asociación Mutual Israelita Argentina, a Jewish community center, in Buenos Aires. In addition to those killed, more than 300 others were injured. No one has ever been tried for the attack, though evidence has long pointed to Iran being behind it.

As attendees waved black-and-white photos of the victims, an alarm was sounded at 9:53 a.m., the exact moment that the bomb detonated 28 years ago. Among those in attendance was U.S. Special Envoy to Monitor and Combat Antisemitism Deborah Lipstadt.

On social media, she wrote: “Today marks the 28th anniversary of the Iranian-sponsored Hezballah attack on the Asociación Mutual Israelita Argentina (AMIA), the Jewish community center in Buenos Aires. The July 18, 1994 bombing remains the single deadliest anti-Semitic attack since the Holocaust.

“High-level Iranian government officials were directly implicated in the attack, directing Hezballah terrorists to carry it out. Twenty-eight years later, the United States stands with Argentine Jews—and all Argentines—in seeking accountability for the horrific actions of that day,” continued Lipstadt. “I am humbled to be in Argentina on the anniversary of the AMIA bombing, to commemorate this somber day of remembrance. The callous murder of civilians cannot stand, and the United States is committed to countering Hezbollah, and Iran’s, malign influence.”

The Israel Foreign Ministry also called for justice in their social-media post, saying “today, and every day, we are committed to the memory of the victims and to justice.”

The Jewish Federations of North America posted that “three decades later, we are still reminded of the vulnerability of our Jewish institutions in North America and around the globe.”

The World Jewish Congress posted a three-minute video highlighting the events of the day and the subsequent investigations, noting that “till this day, no one has been prosecuted for the heinous crime. We continue to demand justice.” 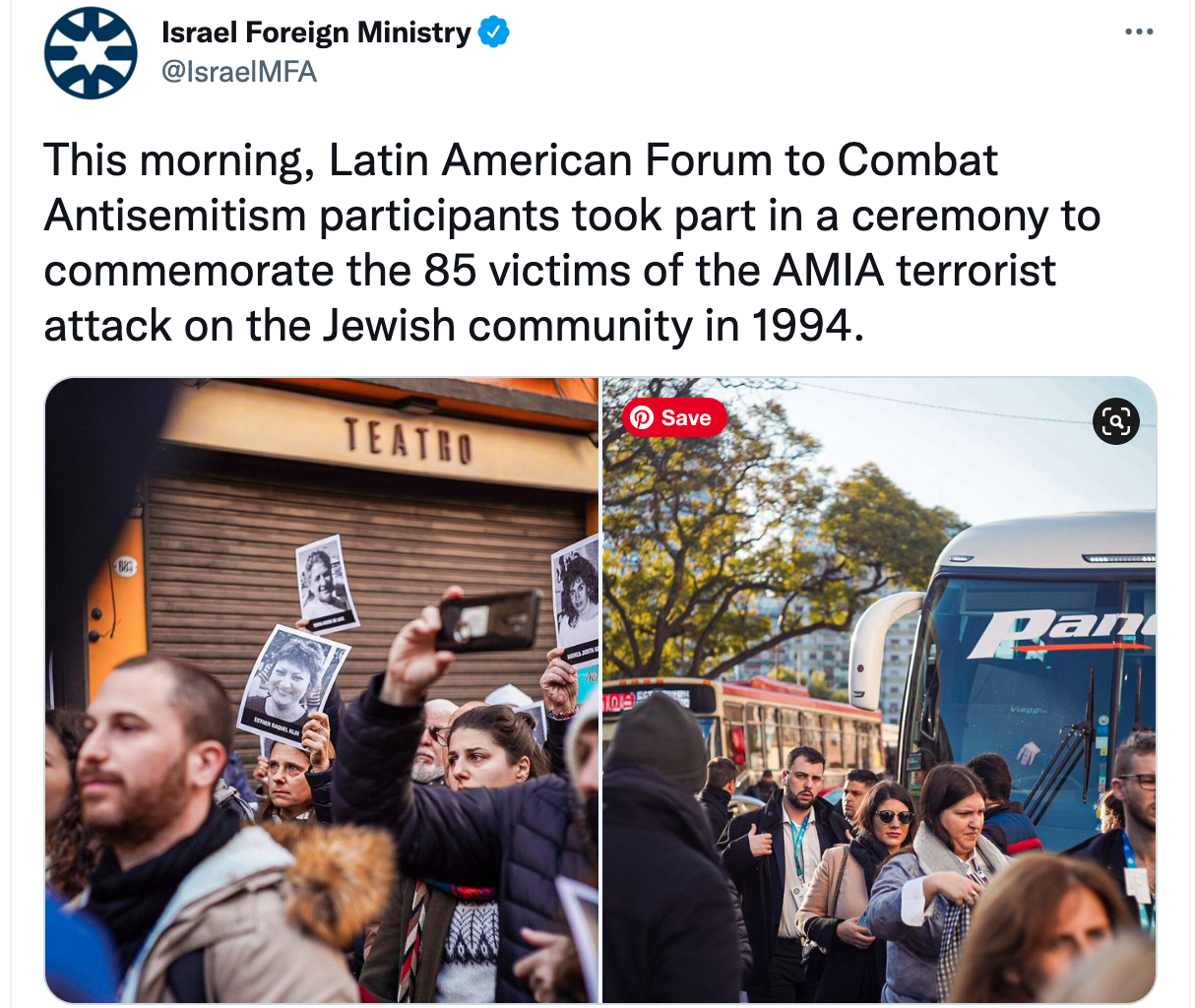 The Israeli Foreign Ministry participated in an event to honor victims of the 1994 AMIA bombing in Buenos Aires on July 18, 2022. Source: Twitter.

The AMIA bombing was not the only terror attack against Jews being remembered on Monday.

Across the globe and nearly 20 years later, on July 18, 2012, a bus bombing in Bulgaria targeted a bus full of Israeli tourists. Six people were killed in the attack, including pregnant women, and dozens of others were injured. In September 2020, two Hezbollah terrorists were convicted in absentia for the attack.

“Ten years ago today, 42 people’s vacations turned into a nightmare when a suicide bomber exploded on a bus transferring Israeli tourists to hotels from Burgas Airport in Bulgaria,” wrote the group Combat Antisemitism on Instagram. “Five Israelis and one Bulgarian citizen were killed, and more than 30 were injured. May their memories forever be a blessing.”

For B’nai Brith Canada, the anniversary of these attacks serves as a springboard to renew calls for the IRGC—Iran’s Islamic Revolutionary Guard Corps (RGC)—to be placed on the list of official terrorist entities in Canada. The Quds Force, a division of the IRGC, is labeled as such.

“For too long, the Iranian regime has evaded justice and responsibility for the AMIA attack. Iran continues to be the leading sponsor of international terrorism to this day, making Iran’s IRGC a serious public security threat to all Canadians,” B’nai Brith CEO Michael Mostyn told JNS. “Today’s anniversary should serve as a reminder to our government that Canadians have not forgotten about parliament’s commitment to list the IRGC as a terror group, and we will not rest until this promise is fulfilled.”

Using a “count-up clock” and a graphic depiction of a man they are calling “Bennie” walking around the Earth, the organization noted that it has been more than four years since Canada’s House of Commons voted in favor of adding the IRGC to the terror list. They have also created a petition for Canadians to sign.

“Bennie has walked around the world a mind-boggling 5.2 times since the motion passed,” said Mostyn. “Just think about that delay. We find it astonishing. How much longer will it take the government to fulfill its promised action to protect Canadians?”

He noted that justice has not been served in either case.

“The United States is committed to countering Hezbollah and Iran’s malign influence. The funding, training, weapons and other support Iran provides Hezbollah support complex and heinous terrorist attacks like these. The callous murder of civilians must not stand,” he said. “With our support, more than a dozen countries across Europe, South America, Central America and the Pacific have issued national level designations, bans or other restrictions against Hezbollah. We urge more countries to take similar measures, which make it harder for the group and its backers in Tehran to threaten peace and security around the globe.” 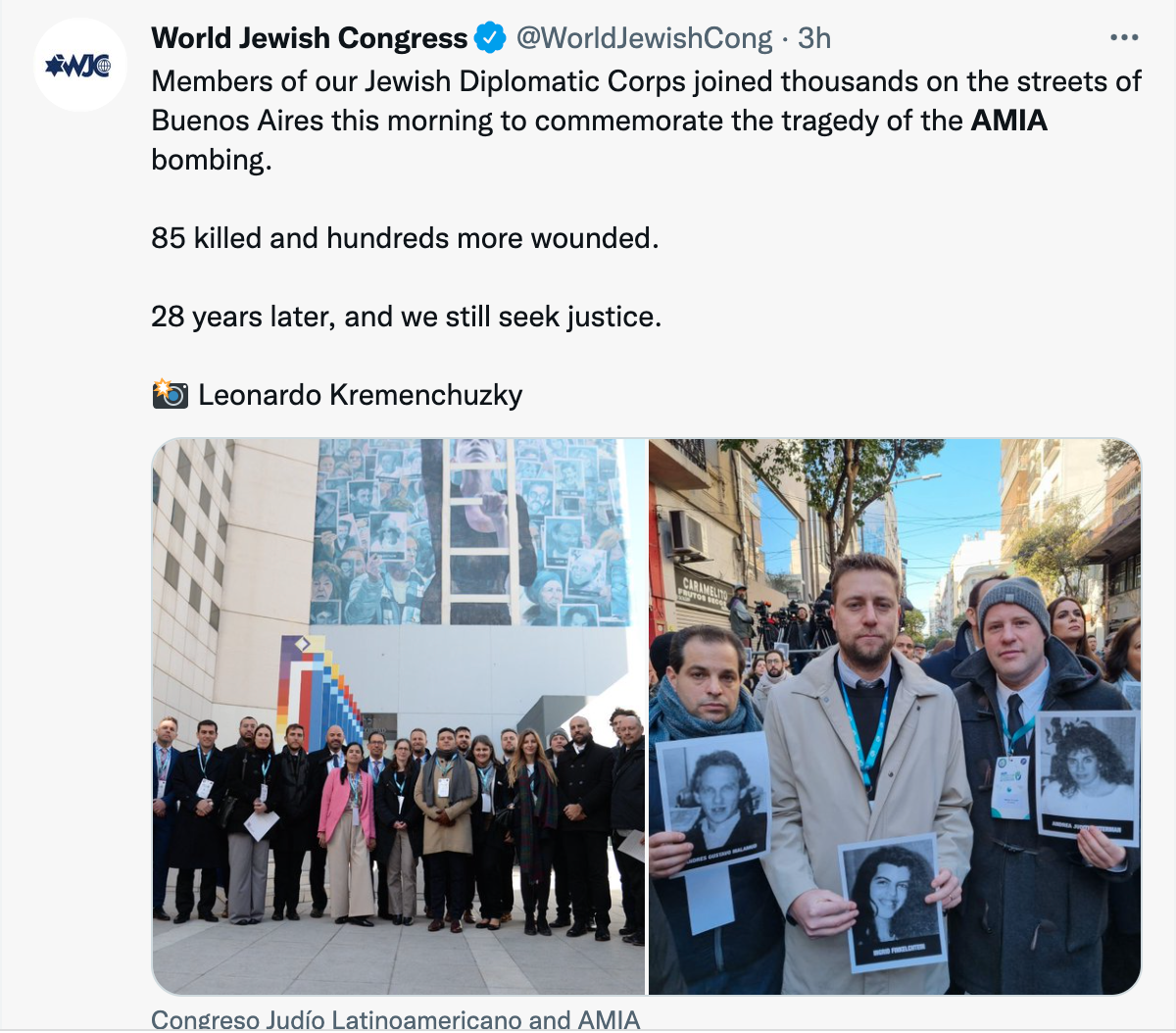 Members of the World Jewish Congress and the Congreso Judío Latinoamericano participated in an event to honor victims of the 1994 AMIA bombing in Buenos Aires on July 18, 2022. Source: Twitter.
Republish this article in your newspaper or website