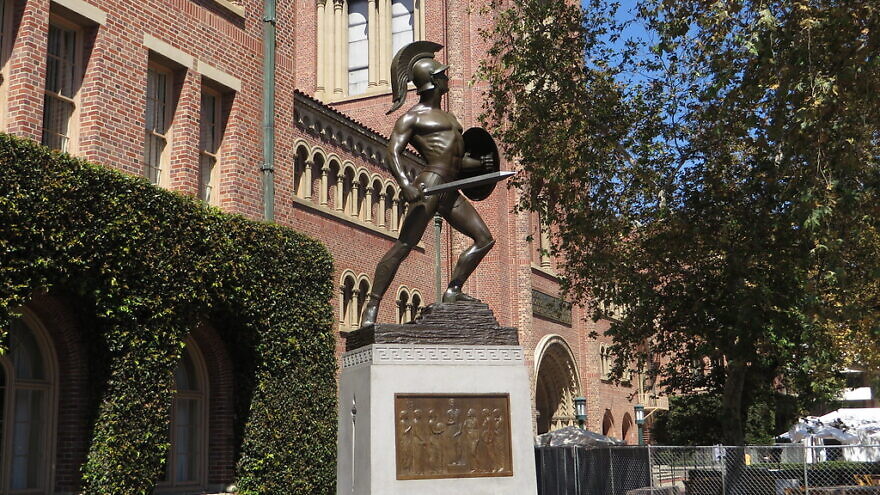 (August 27, 2020 / Jewish Journal) The Alliance for Academic Freedom (AAF), which describes itself as a group of more than 120 progressive and liberal academic scholars, have announced their support for Rose Ritch, who resigned from her position as USC student vice president earlier this month.

In an Aug. 24 statement titled “Are You Now or Have You Ever Been a Zionist?” the AAF noted that then-student president Truman Fritz faced calls for impeachment in June over allegedly racially insensitive remarks; Ritch also faced calls for impeachment for being silent on the matter. Several social-media users subsequently “attacked Ritch for supporting Israel,” including comments that read, “The president is trash and so is the VP who is a proud Zionist” and “not only is Rose a Zionist who indoctrinated the rest of [the student government] to be Zionists, she is also an above-the-waist-only bisexual.”

The AAF acknowledged that the USC administration did suspend Ritch’s July impeachment hearing after the Louis Brandeis Center sent a letter to the administration highlighting the various social-media comments directed at Ritch over her support for Israel. However, the AAF noted that the online attacks against Ritch still went on and led her to resign.

“When such behavior occurs, faculty and administrators have a duty to intervene. USC’s administration was right to suspend Ritch’s impeachment trial,” the statement read. “It was regrettably not until after her resignation that USC president Carol Folt issued an admirable statement calling the treatment of Ritch ‘unacceptable,’ acknowledging antisemitism at USC, and supporting a university-wide initiative by the USC Shoah Foundation to counter hate.”

However, the AAF argued that the fact that Ritch was driven to resign “shows that the administration and faculty failed to speak out forcefully and early enough to ensure that Ritch could assume the vacated presidency. When political speech crosses over into the harassment of an individual, whether in person or online, universities need to act swiftly. They should have procedures in place for reporting incidents of harassment and intimidation and should immediately take steps to end such behavior.”

It added that Ritch is one of many examples of pro-Israel students who have been harassed on college campuses and highlights the need for college campuses to better inform their students about the Israel-Palestinian conflict and about Zionism.

“Whatever one’s view, students who would invoke issues such as Zionism and the Israeli-Palestinian conflict in arguing with one another ought to learn much more about it, so as to avoid falling into the kinds of uninformed caricatures or oversimplified assertions that, in Ritch’s case and others, have led to the demonization of others,” the statement read. “Students, indeed, should wrestle with the competing historical and political claims of the many different parties in the conflict to understand why hatred frequently manifests itself around these issues.”

The statement concluded: “The convergence of hostility to the state of Israel, rising campus intolerance, and social-media harassment campaigns has created a toxic environment on some campuses—leading, as they did here, to violations of academic freedom and fair treatment. It is important that university administrators and faculty nationwide develop policies and the nerve to speak forcefully against the bullying, online or in person, based on political ideologies.”