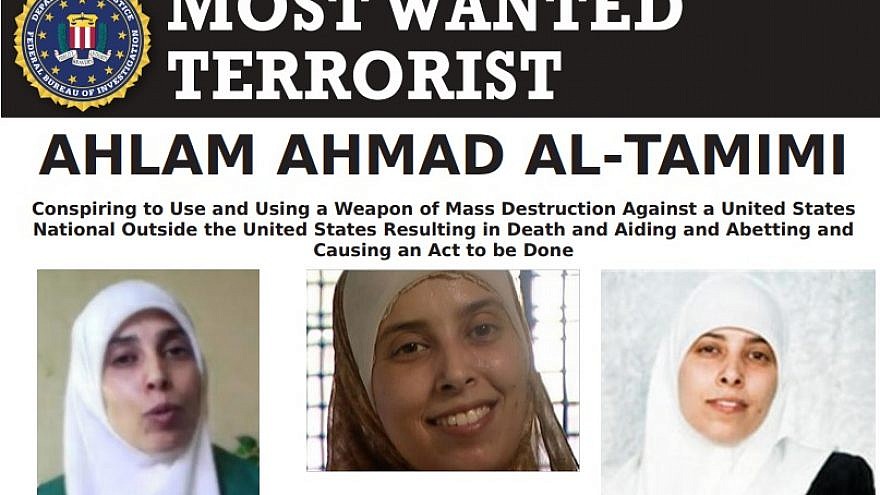 An FBI “Most Wanted Terrorist” poster for Palestinian terrorist Ahlam Ahmad Tamimi, one of the masterminds of the Aug. 9, 2001 bombing of the Sbarro pizzeria in Jerusalem that led to the deaths of 15 civilians, two of them Americans. Source: FBI.
Republish this article
1222 WORDS
Spread the word.
Help JNS grow!
Share now:

(May 12, 2022 / JNS) Right before Jordan’s King Abdullah II is to meet with U.S. President Biden at the White House, the parents of an American teenager murdered in a Palestinian terrorist attack in Jerusalem in 2001 are hailing proposed U.S. legislation that would hold the government of Jordan accountable for its years-long refusal to extradite the Hamas terrorist who facilitated the suicide bombing.

Arnold and Frimet Roth’s campaign for justice stems from the murder of their 15-year-old daughter, Malki, who was killed in the suicide bombing at a Sbarro pizzeria in downtown Jerusalem.

“The woman who boasts of having had the key role in the massacre lives freely and famously in Jordan’s capital, protected and celebrated in ways that simply appall us,” said Arnold Roth.

Rep. Greg Steube (R-Fla.) recently introduced “The Recognition of the 1995 Jordan Extradition Treaty with the U.S. Act” to limit U.S. assistance to Jordan until Jordan recognizes the validity of the 1995 extradition treaty between the two countries.

“Our U.S. tax dollars will not continue to flow to a country harboring a Hamas terrorist with American blood on her hands,” said Steube, according to a statement on his website. “The Government of Jordan is failing to comply with a 1995 treaty which requires them to extradite individuals like Ahlam Tamimi, who faces trial for terrorism under U.S. law. My legislation will ensure our foreign assistance to Jordan is abruptly halted until Jordan is in compliance with our extradition treaty.”

Ahlam Ahmad al-Tamimi lives freely in Jordan despite orchestrating the horrific terrorist attack in Israel that killed 15 innocent people, including four children and two American citizens, and injured 122 others. While Tamimi remains on the FBI’s “most wanted” terrorist list, Interpol dropped its arrest warrant against her in 2021. 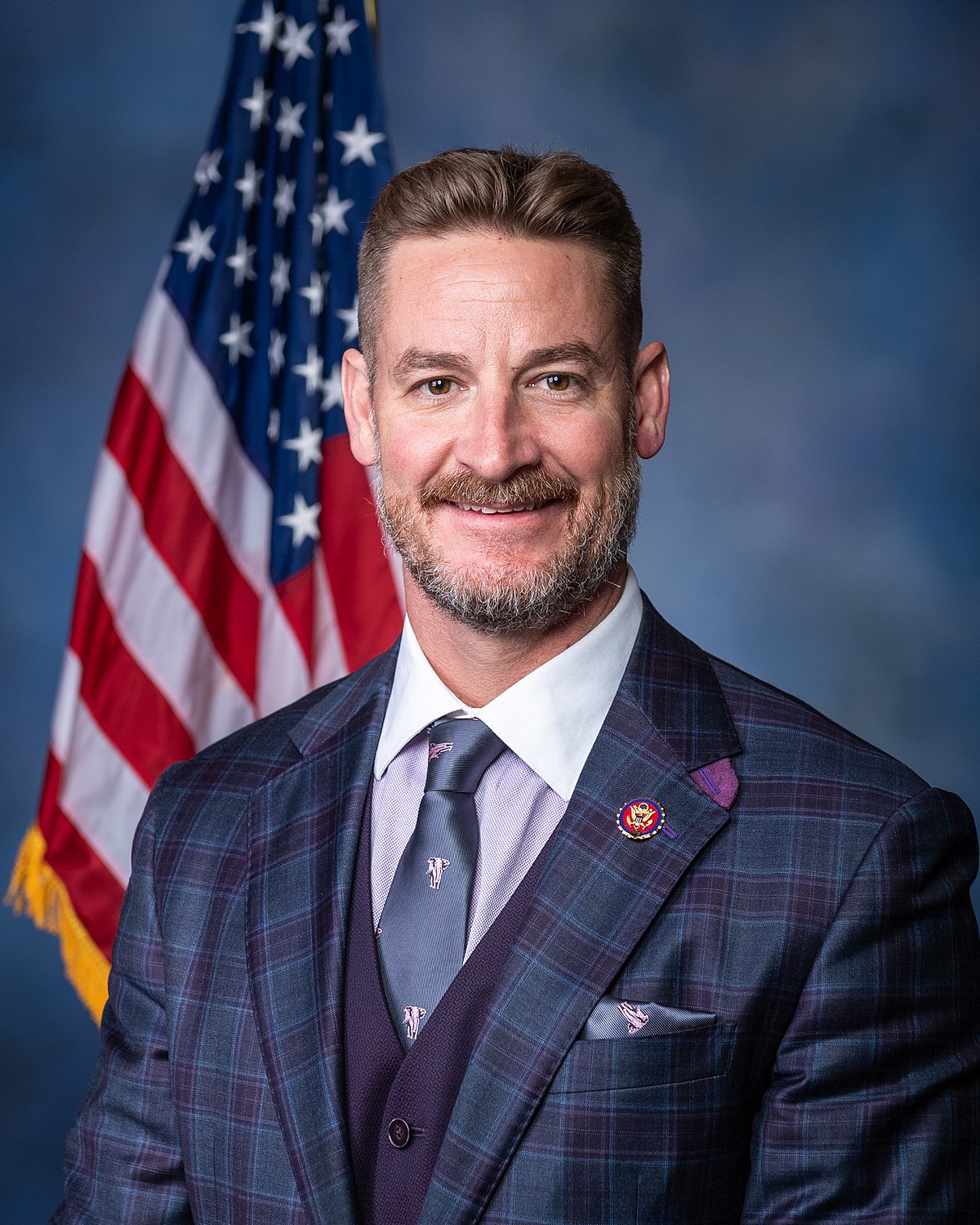 The Roths have been disappointed with Washington’s approach so far, and for them, Steube’s initiative offers a glimmer of hope that justice can prevail.

“For almost a decade, King Abdullah II has rejected requests from U.S. officials at the highest levels to hand over the terrorist who faces charges in Washington,” said Roth. “Tamimi has proudly admitted to the charges. They have made her an icon among Jordanians and Palestinian Arabs.”

“Tamimi’s obscene, ongoing freedom in Jordan has to be on the agenda of every meeting the Jordanian monarch is granted in this week’s royal visit to Washington,” said Arnold. “That includes his reception on Friday in the Oval Office. Bringing Tamimi to justice—a nonpartisan issue with clear consequences for the battle against terror—has been thwarted by the Jordanians for far too long and by too many officials.”

Abdullah is slated to meet with Biden in the White House on May 13 to discuss the recent Palestinian riots on the Temple Mount in Jerusalem.

‘We certainly reject any foreign involvement’

His visit to Washington comes amid a controversy over a Jordanian request to increase the Waqf presence on the Temple Mount by 50 guards.

Addressing the controversy, Ayman Safadi, Jordan’s foreign minister and deputy prime minister said during an interview on Tuesday with Jordanian Al Mamlaka TV that Israel “has no sovereignty over the holy places in Jerusalem; this is occupied Palestinian land.”

Safadi also accused Israel of being “an occupying force that is blocking moves taken by the Jordanian Ministry of Endowments in order to maintain security and peace in Al-Aqsa.”

Tamimi confessed to all charges in an Israeli court and was sentenced to 16 terms of life imprisonment. But in a 2011 deal with Hamas for the release of Gilad Shalit, a young Israeli soldier held hostage for five years by Hamas in the Gaza Strip, she was one of 1,027 Palestinian Arab prisoners freed by Israel. Born in Jordan, Tamimi returned there, rapidly establishing herself as an influential media celebrity with a vast, global Arabic-speaking audience.

In March 2017, the U.S. Department of Justice announced federal charges against Tamimi, declaring her an FBI “most wanted” terrorist and requested extradition. In January 2018, the U.S. State Department announced a $5 million reward for information leading to her arrest. But she remains free today, shielded from U.S. justice by Jordan in breach of the 1995 extradition treaty between the two countries. The unrepentant Tamimi has been called America’s most wanted female terrorist.

Since 2017 when Washington made its first formal request, Jordan has persistently refused to honor its treaty obligations to the United States—its largest benefactor—in clear breach of the solemn promise made by King Hussein, the father of today’s king, to uphold the treaty. 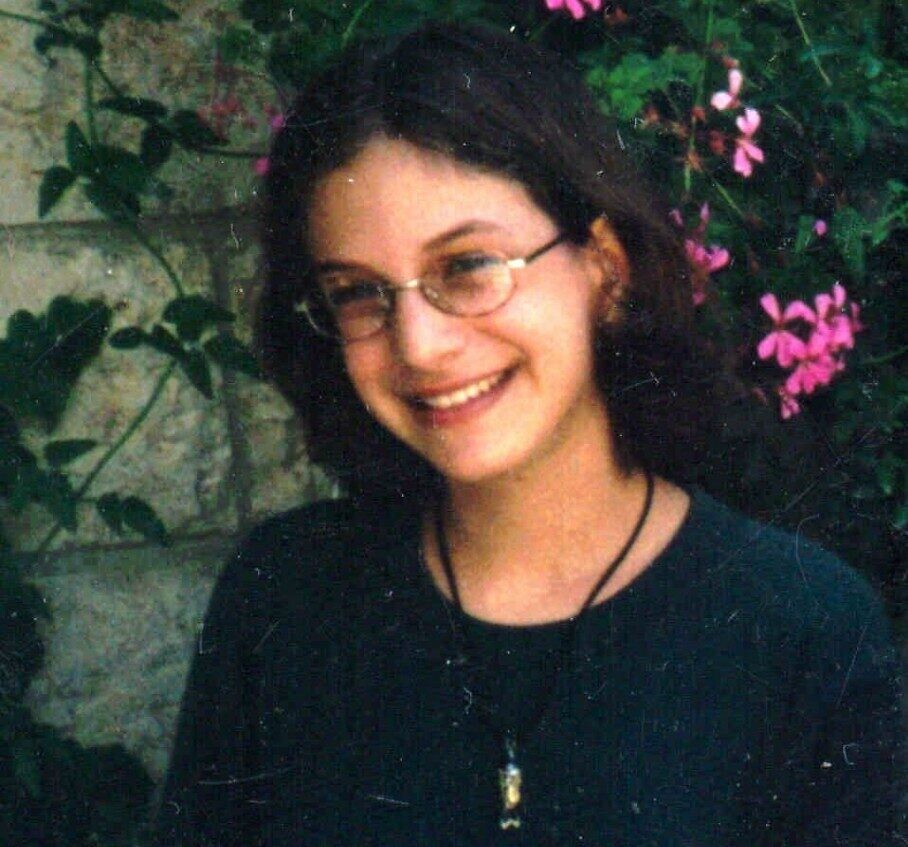 Israeli-American Malka Chana (Malki) Roth, who was killed at the age of 15 in the Sbarro restaurant suicide bombing in August 2001. Credit: Courtesy

Roth says there is more to the story than people know.

According to Roth, “there’s reason to believe the Obama administration genuinely wanted Tamimi brought to U.S. justice and made efforts to persuade the Jordanians that the extradition treaty left Jordan with no option. … Abdullah however stood firm in his refusal to honor the kingdom’s obligation.”

Roth said that after the charges were made public in 2017, “two very different things happened.”

First, he and his wife discovered that no one in the U.S. State Department was willing to address their questions. “We were met with a wall of silence,” he said.

Second, just six days after the charges were made public, “the Jordanians declared that a decision of their highest court made the two-decade-old treaty invalid.”

“The key point, never stated, was that Tamimi’s massacre and the dead Jewish children she targeted had made her a Jordanian icon,” said Roth. “We have no expectations of the Jordanians. What is deeply dismaying is how American officials … deal with the scandal.”

Meanwhile, Roth lamented, “Abdullah is treated with unusual deference. President Biden has been effusive in his praise, and not a single one of his senior officials have told the American public the truth: that Jordan, the second-largest recipient of taxpayer-funded foreign aid, is remorselessly trampling a solemn bilateral pact.”

“This is exasperating,” he said. “The U.S. holds all the cards here. If it wanted Tamimi tried in Washington for the terrorist savagery, she has freely admitted over and again and for the American lives she boasts of extinguishing, it would have happened years ago. Jordan’s only question should have been: ‘Which flight?’ ”

The Roths are calling upon lawmakers from both sides of Congress to support Steube’s proposed legislation.

“What’s reasonably clear is that the U.S. government has concerns that its officials believe overshadow the issue of justice,” said Arnold. “What I do know is that not a single one of the various officials with whom I have engaged has admitted this.”

Frimet added that “seeing the woman behind the savagery of the Sbarro bombing finally stand trial in the U.S. ought to get the wholehearted backing of everyone who cherishes justice. All human lives have to count. So let’s recognize that the Jordanian woman’s freedom is understood by vast audiences outside the U.S. as granting impunity to certain kinds of murder. That’s unbearable. We have to change it.”