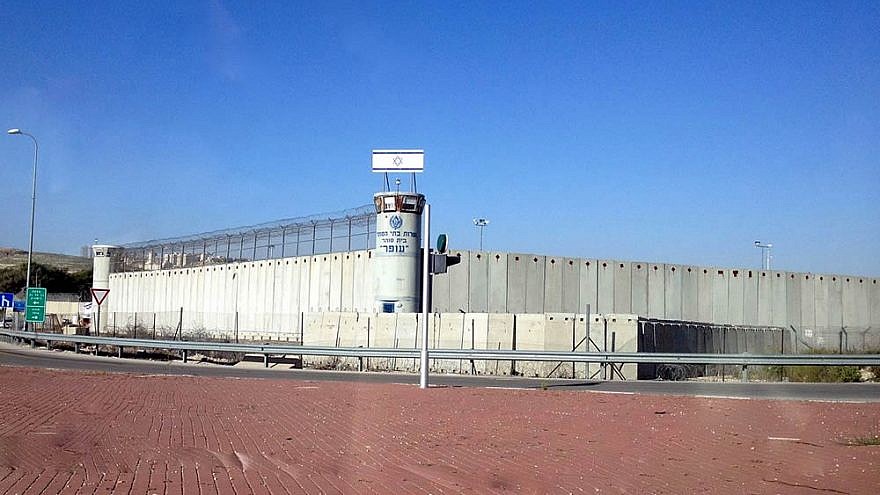 Ofer Prison, an Israeli incarceration facility in the Judea and Samaria, between Ramallah and Giv’at Ze’ev. It is one of three facilities of the same nature, including Megiddo and Ktzi’ot prisons. Credit: Wikimedia Commons.
Spread the word.
Help JNS grow!
Share now:

(August 9, 2021 / JNS) A special clause in the contract between Israel’s Postal Bank (IPB) and the Israel Prison Service (IPS) stipulates that the latter will compensate the former should it be sued for violating the country’s anti-terror finance law, Israeli media reported on Monday.

The clause was included as part of a request by the IPS that the bank set up accounts that security prisoners could use in prison cantinas, into which the Palestinian Authority could indirectly deposit funds, according to Yediot Achronot.

The clause (section 8a of the contract) states: “The IPS will bear the consequences of any verdict against the company (Postal Bank) due to a lawsuit alleging a violation of the Counter-Terrorism Law due to the obligations of the company toward the IPS.”

Section 31 of Israel’s Counter-Terrorism Law stipulates that anyone found guilty of financing terrorism is liable to 10 years’ imprisonment or a heavy fine.

Like all prisoners in Israel, the thousands of security prisoners in Israeli jails are eligible to receive several hundred shekels a month for use in prison cantinas. While some of this money is deposited by the prisoners’ families, some 400 shekels ($124) a month comes from the P.A. within the framework of its “pay for slay” program.

According to information obtained by Israeli NGO Lavi under the Freedom of Information Law, from 2017 to 2019, the bank transferred some 100 million shekels ($31 million) from the P.A. to security prisoners in this way, the report stated.

“It is unbelievable that the IPS allows itself to ignore the Counter-Terrorism Law in order to maintain [calm] in the prisons,” said Lt. Col. (res.) Maurice Hirsch, head of Legal Strategies for the research institute Palestinian Media Watch and former chief Israel Defense Forces prosecutor for Judea and Samaria.

Lavi chairman Avichay Buaron called the cooperation between the IPS and IPB in transferring P.A. funds to terrorists a blatant violation of the Counter-Terrorism Law, while Matan Peleg, CEO of Im Tirtzu, called the agreement a “shameful capitulation to terror.”

In response, the IPS said, “The Postal Bank is the operational arm of the government and works in connection with it, and the 2007 contract was concluded after full examination and supervision by the State Attorney’s Office. The transfer of funds to security prisoners via canteen accounts at the Postal Bank is done in accordance with the law, as the P.A. funds aren’t transferred directly to the prisoners. As of this moment, we are unaware of any verdict or decision against the Postal Bank or its employees for violating the Counter-Terrorism Law and never, as far as we know, was a complaint made about this to the IPS.”

The Justice Ministry responded: “Following an in-depth discussion by then-Deputy State Prosecutor for Special Functions Shai Nitzan, a system was set in place under which the accounts of all of the security prisoners would be under the name of the Prisons Service, which would manage them as a trustee or power of attorney for each and every prisoner. As a result of this, an agreement was signed with the Israel Postal Company after it was examined and investigated at the time by the relevant sources and approved from a legal perspective. This system is in accordance with the law, and there is ongoing supervision of how it is implemented. The Prison Service can at any time send the Postal Bank a list of people who are prevented from depositing money in accounts, following which the Postal Bank is prohibited from receiving deposits from them.”