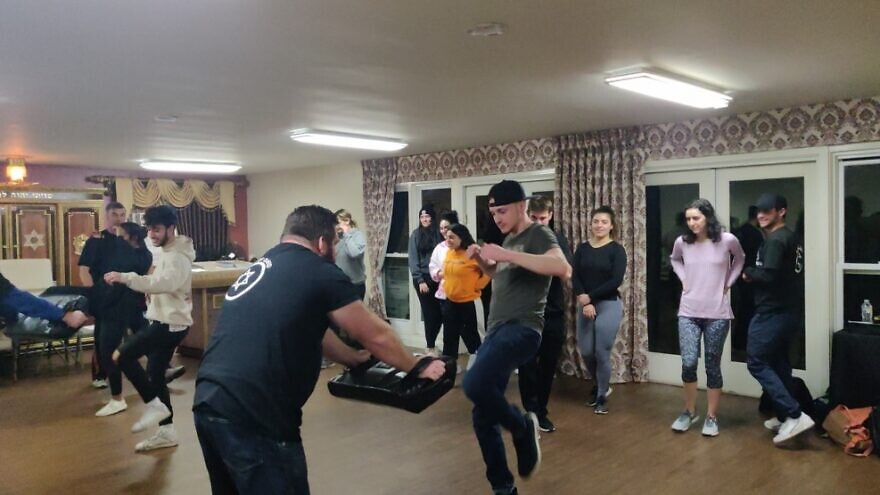 (July 23, 2021 / JNS) Cameron Kholos, a Jewish student at the University of Colorado Boulder, had been taking martial arts for more than 10 years and wanted to teach other Jewish students self-defense.

“I was really into Krav Maga,” says Kholos, a mechanical engineering major in his third year. So when Rabbi Yisroel Wilhelm and his wife, Leah, co-directors of the Rohr Chabad Center at the University of Colorado, shared during a student Shabbat dinner that they were starting a new program on it, including food and discussion, and they needed a volunteer to lead it, the 20-year-old’s hand shot up.

“It turned out to be a really awesome experience,” says Kholos. “These days, it’s super important to be able to defend yourself and to have the reflexes and skills.”

Called “Shield of David,” the program was developed just prior to the pandemic by co-founders Brian Blehar, an entrepreneur in the wellness industry, and optometrist Eli Ben-Moshe. It quickly spread to 10 college campuses and synagogues.

The six-week pilot program at CU Boulder included 15 students who came together to study Jewish topics and history, share a meal, as well as learn Krav Maga. The program will officially launch during the next school year.

“It’s important for Jewish students to understand what their role is in responding to anti-Semitism,” says Rabbi Wilhelm. “Where they come from, their heritage, the story of what’s gotten us here, how we have overcome thousands of years of anti-Semitism. And Judaism, its values and Torah still stand strong among everything.”

He adds that it’s important for students to have the ability to “stand up and explain Judaism to others, to their friends, to the world.” 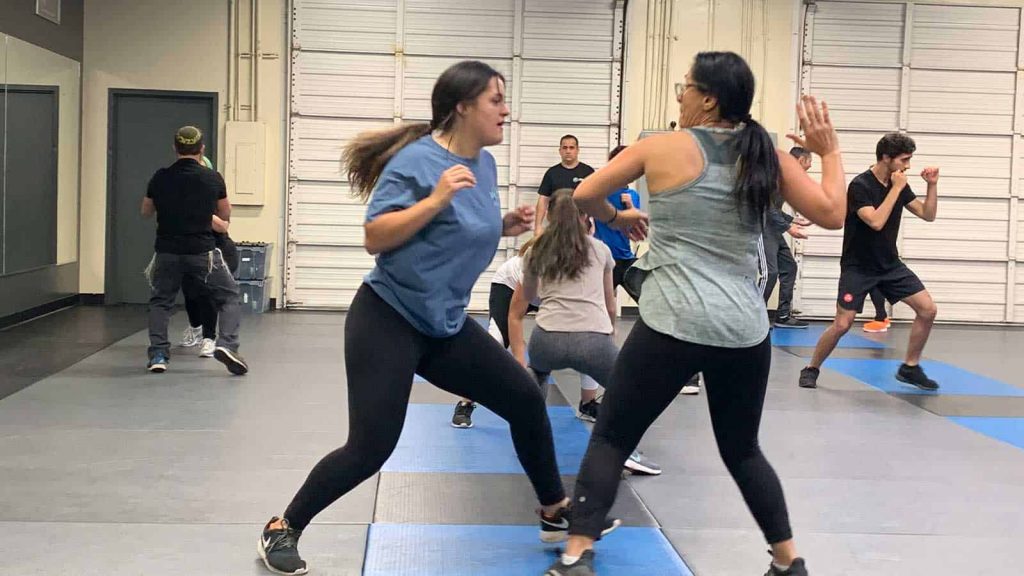 The six-week Shield of David pilot program at CU Boulder included 15 students who came together to study Jewish topics and history, share a meal and learn Krav Maga. Credit: Courtesy.

“Physically, very practically speaking, there’s a lot of anti-Semitism going on,” he says. “It’s good to know that in a worst-case scenario they know how to respond. Krav Maga is actually a very simple way of reaching the kids. They learn to understand the importance of standing up for themselves.”

Plus, he notes, partnering with Shield of David in this way draws more students than other programs.

Each session starts with Krav Maga—how to use it in real life on campus, on a subway or on the street. Then there’s a story and learning period, including the history of anti-Semitism and past examples, as well as learning about Judaism.

“In the future, we will incorporate more curriculum and education,” says Kholos, although he acknowledges that the main draw for students initially is the lure of Krav Maga and free food. “That got a lot of people to come.”

During the sessions, he says the initial reaction was often, “Oh, I didn’t know this was happening.”

Most of the program was student-led, and the rabbi was there to answer questions.

Shield of David co-founder Eli Ben-Moshe, who has two children in college—in Boulder and at the University of Wisconsin in Madison—was “appalled” at what Jewish students were going through on college campuses, as well as the fact that many parents don’t even realize what is going on.

“Our kids are experiencing anti-Semitism at schools. They didn’t even realize this was what was happening,” he says—both parent and child.

So, he says, something was needed to “change the mentality.”

During World War II, for example, he notes that there were Jewish partisans who fought back. And here were active Jews against the British Mandate. Along those lines, he aims to help develop “proud, strong Jews—like Israeli Jews.”

It’s been relatively easy for anti-Semitism to seep into schools and other places because people tend to be “asleep over here.”

For instance, continues Ben-Moshe, “someone says something [against Israel and the Jews] and somehow it’s OK. If the same joke was said about blacks or gays, no one would stand for it.” 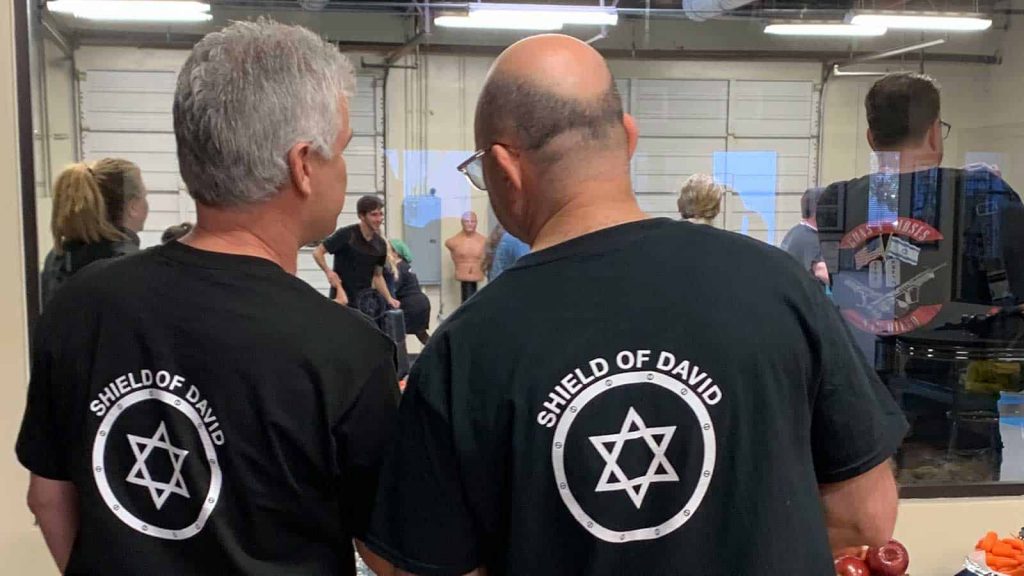 Shield of David co-founder Eli Ben-Moshe, who has two children in college—in Boulder and at the University of Wisconsin in Madison—was “appalled” at what Jewish students were going through on college campuses, as well as the fact that many parents don’t even realize what is going on. Credit: Courtesy.

As an example, the AEPi fraternity moved its building to another location on campus, and the old one was dubbed by students as “the oven.”

He called the Chabad rabbi, and that was when they created the first event.

They now plan to roll out the program at between 20 and 30 schools, though more than 50 have reached out asking about it.

In addition to the practical skill of Krav Maga, the students get to socialize. They develop Jewish pride and, and it “works well for everyone,” says Ben-Moshe, who adds that it puts the kids on the offense, understanding who they are and what’s going on.

“We are changing the mentality slowly,” he notes.

After the pilot program, the students become members of Shield of David and continue to receive alerts. There’s also an app that further strengthens the sense of community among Jewish students. Some of the program ambassadors in each city will get sponsored trips to Israel to learn more. Shield of David graduates become what they call “intellectual foot soldiers.”

They need to “know that when their school or kids’ school or professor is teaching stuff that’s wrong,” that they are aware of it and can speak up,” says Ben-Moshe. “Each person can help in a different way. We each do what we can.”

He uses an educational example, asking how many people know that the first two presidents of the NAACP were Jewish? Or that Jews marched alongside Martin Luther King Jr. in the fight for civil rights?

“We aren’t the enemy,” he makes sure to emphasize.

“Krav Maga is the bait,” he says. “If you don’t have the spiritual part, the rest is useless.”

“You can disagree with how spiritual a person is. But when someone calls you a kike, you suddenly care.”

He points out that the very first lesson is to identify the problem: That anti-Semitism has become normalized. “People are realizing this is not the same United States. People are being brainwashed.”

‘Promote unity for freedom and democracy’

Rabbi Mendel Polichenco, co-director of Chabad Carmel Valley in San Diego, worked with Shield of David to create a six-week program for more than 50 people of all ages in his community, meeting outside of his Chabad House. He says he was prompted to do so after the synagogue shooting at Chabad of Poway, Calif., in April 2019.

“I’m very passionate about fighting anti-Semitism, so it was a natural fit,” he says. “We developed it together.”

Like the on-campus programs, it included an overview of Jewish history, Jewish law, Jewish values, plus the Krav Maga.

It’s essential to teach students of all ages to “defend themselves physically and intellectually,” he says.

The goal is also to encourage students to take a “strong and swift response to even minor issues before they escalate. We are determined to make sure that doesn’t happen again.”

“It’s very important to train people in how to protect themselves and their communities. It’s vital to take responsibility for your own safety.”

Originally from Argentina, Rabbi Polichenco says he knows how important it is to stand up and fight against those who hate us: “It’s very important to give young people the tools to be strong, proud Jews.”

Ricky Stern, an engineer, and his wife participated in the program at Chabad of Carmel Valley. “It was a really fun, educational experience. We got to meet new people and make new friends,” he says. “It was team-building and group-building. We can come together for a common purpose—and to realize that we have to stand together.”

Co-founder Brian Blehar acknowledges that “I just wish we didn’t have to do this.

“I never thought I’d have to do this when I moved to America,” says Blehar, who came in 1994 from South Africa, adding that he grew up with apartheid and anti-Semitism, but that it didn’t seem as “brutal as it is here.”

Following the political situation around the world, he says “we’ve been warning people that you’re putting your heads down. If you do nothing, it gets worse.”

Anti-Semitic attacks, he says forebodingly, are “now on a corner near you.” And so, he wants the program focused on Jews fighting back.

“Sometimes, you have to fight and protect yourself,” he says. “I don’t like promoting violence. But if you don’t fight back, the bullying won’t end.”

The five-year vision for Shield of David is to train 10,000 students.

“Our goal is to be on every campus,” says Blehar. “To arm the kids with the facts” and with their ability to defend themselves.

To that end, at a “We Are Israel” rally on Sunday in El Cajon, Calif., Jews and Christians will unite to protect themselves and Judeo-Christian values, with more than 30 churches expected to be represented, along with various speakers, including former U.S. Secretary of State Mike Pompeo, El Cajon Mayor Bill Wells; American talk-show host Larry Elder; and others.

The goal, proclaims Blehar, is to promote “unity for freedom and democracy as we mobilize Jews and Christians to boldly reject anti-Semitism and Christian persecution.”

The July 25 event will be held from 3 p.m. to 6 p.m. at Prescott Promenade in El Cajon, Calif. For more information, click here.