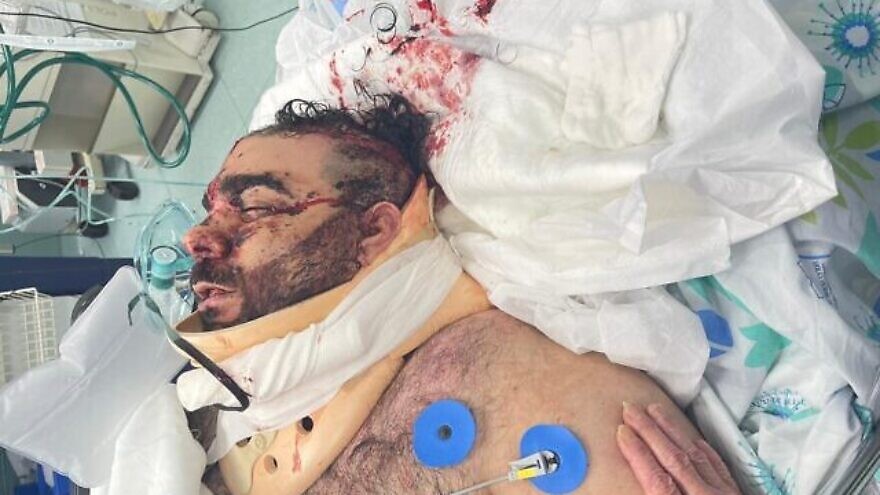 Mor Ganashvili in the hospital, soon after he was attacked, May 2021. Courtesy photo.
Spread the word.
Help JNS grow!
Share now:

(January 18, 2023 / JNS) The Israel Security Agency (Shin Bet) announced on Wednesday the filing of an indictment on terror charges in connection with a mob attack on a Jewish man in Akko in May 2021.

Mor Ganashvili was forced from his car and beaten by a mob with stones and iron bars, sustaining serious injuries. The attackers eventually stopped beating Ganashvili at the behest of a local sheikh. Another Arab man subsequently administered emergency medical treatment on the scene prior to Ganashvili was evacuated to hospital.

According to the Shin Bet, Asi Mahmoud Salah Hourani, who was arrested in recent weeks, “took an active role” in the assault.

The indictment was filed by the Northern District Attorney’s Office to the Haifa District Court, the Shin Bet said in a statement.

The mob attack occurred in the context of the mass riots that rocked Akko in May 2021, with Arab mobs setting up makeshift roadblocks, destroying public property and targeting police.

It was part of the wider internecine violence that erupted in Israel following the outbreak of war between the IDF and the Hamas terrorist group in Gaza on May 10, 2021.

Hourani is the eighth person to be prosecuted in connection with the assault on Ganashvili.

In November, Adam Bashir was sentenced to 10 years in prison for his part in the attack. The Haifa District Court convicted Bashir of terror assault with the intent to cause harm.