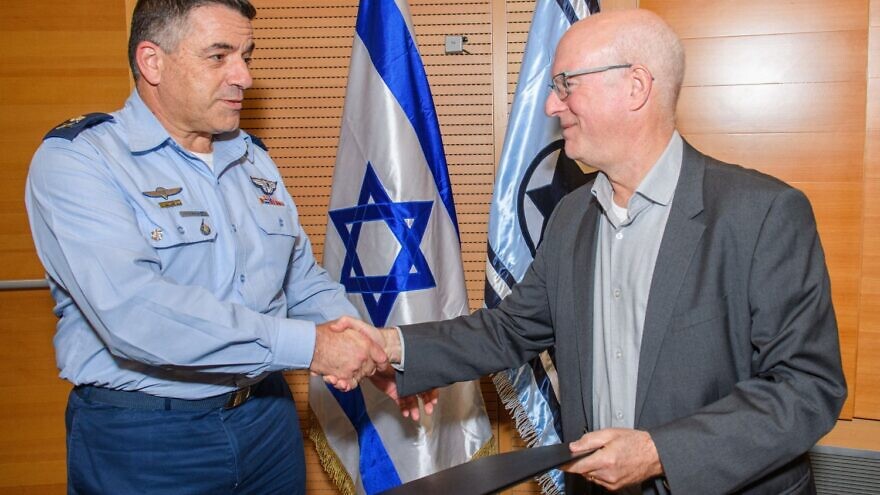 (January 18, 2022 / JNS) Tel Aviv University and the Israeli Air Force have announced the establishment of a first-of-its-kind center that will “harness the world of civilian research and knowledge to advance various areas related to policymaking and strategic thinking on issues of air and space.”

Matania, who is the former founding head of the Israel National Cyber Directorate, told JNS that the center will serve as an innovative multidisciplinary research facility to generate new insights for the IAF on strategy and policy.

“The IAF is interested in boosting its strategic insights and in understanding power in the broad sense of the word, beyond force. This means gaining insights that go beyond dropping a bomb on a target and learning about the strategic issues such as sending signals in the region,” Matania told JNS.

“The center will research issues such as the potential influence of new disruptive technologies on space and air; the changing strategic landscape in the Middle East; the significance of Israel as a regional power; and the IAF’s role as Israel’s most influential strategic military branch,” he added.

A joint announcement by Tel Aviv University and the Israel Defense Forces spokesperson said a document had been signed at the launch ceremony, emphasizing that “a framework has been formed for multidisciplinary research promoting theoretical and practical knowledge on air and space power, as well as fruitful ties between academia and a range of other sectors, including industry, nonprofits and organizations, government agencies and Israel’s security forces, to develop education and cultivate a cadre of future researchers in this important field.”

It described the step as “an important addition to the vision of the Israeli Air Force—to establish a national research and academic foundation in the field of Air and Space Power in order to harness scientific knowledge for the benefit of the Air Force, encouraging creative and critical thinking, and accelerating the incorporation of innovation into world views of the air force.”

The center will operate within the Gordon Faculty of Social Sciences but will “also involve researchers from engineering, exact sciences and medicine, and serve as a foundation for advancing multidisciplinary research on air and space,” said the statement.

“The IAF understands that strategic insights based on research need to come from a new place,” said Matania. “Tel Aviv University is interested in recruiting researchers on the air and space domains. This cooperation will promote new understandings in Israel and in the defense establishment.”

“We will examine global powers, technology, the region and assemble our research into an overall picture as a more focused ‘punch,’ ” said Matania.

‘A research hub for the air and space domains’

Long-term strategy forms the core of the center’s research objectives. The realization by outgoing IAF chief Norkin—that an analysis of broader national security needs cannot be found outside of non-academic platforms—paved the path to cooperation, according to Matania.

Other research areas will include examinations of disruptive innovative trends, and how these can change air forces and policy analyses.

The IAF will ultimately factor in such insights in its future force build-up programs and the way that it activates its force.

The new initiative will include an applied policy center, similar to America’s Rand Corporation, in the national security field. In addition, the IAF will send its own personnel to the university to study security affairs.

While the private sector is well accustomed to cooperating with the defense establishment, this level of cooperation on strategy and policy with a university is a precedent, stressed Matania. “In Israel, this has no parallel,” he said.

“We plan to bring in more organizations, such as the Israel Space Agency, and perhaps certain industries, to turn this center into a real research hub for the air and space domains,” he said.

During the establishment ceremony, Norkin said: “Today, we are groundbreaking pioneers in a vast range of operational issues which have grown in response to the challenges of our Middle Eastern neighborhood. Thus, together with the IDF’s intelligence operations, airpower has become the main answer to the country’s security challenges. Fighting terrorism from the air, air supremacy, remotely piloted aircraft, the most advanced air defense in the world and three F-35 squadrons are only some of the aspects in which the Israeli Air Force, together with Israel’s defense industries, are leaders and pioneers.”

He added, however, that “we must not rest on our laurels. Only in-depth investigation of ongoing operations will keep us sharp and ready. Yet as we look towards the coming decades, we need more than excellent inquiry. We must expand our activities into the academic arena, to include research methods developed in Israeli academia, at Tel Aviv University. We must set in motion both military and civilian research on air and space power, which will open new horizons to which we may aspire.”

The IAF chief described the cooperation as “a real need arising from the constantly rising complexity of the battlefield and operational challenges—requiring ever greater and deeper military knowledge—in order to ensure the position of the Israeli Air Force as one of the leading forces in the world.”