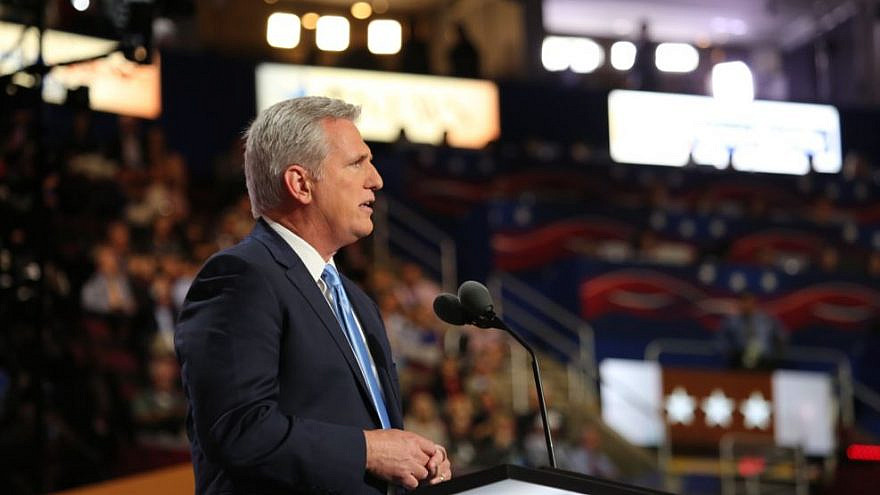 (January 9, 2023 / JNS) On Jan. 7 after midnight, the 118th Congress was finally sworn in with the election of Rep. Kevin McCarthy (R-Calif.) to the House speakership. Democrats had managed to gain one Senate seat in November’s midterms, breaking the 50:50 tie in the upper chamber that required Vice President Kamala Harris to break tied votes.

For some anti-Israel Democratic lawmakers, the future is uncertain. 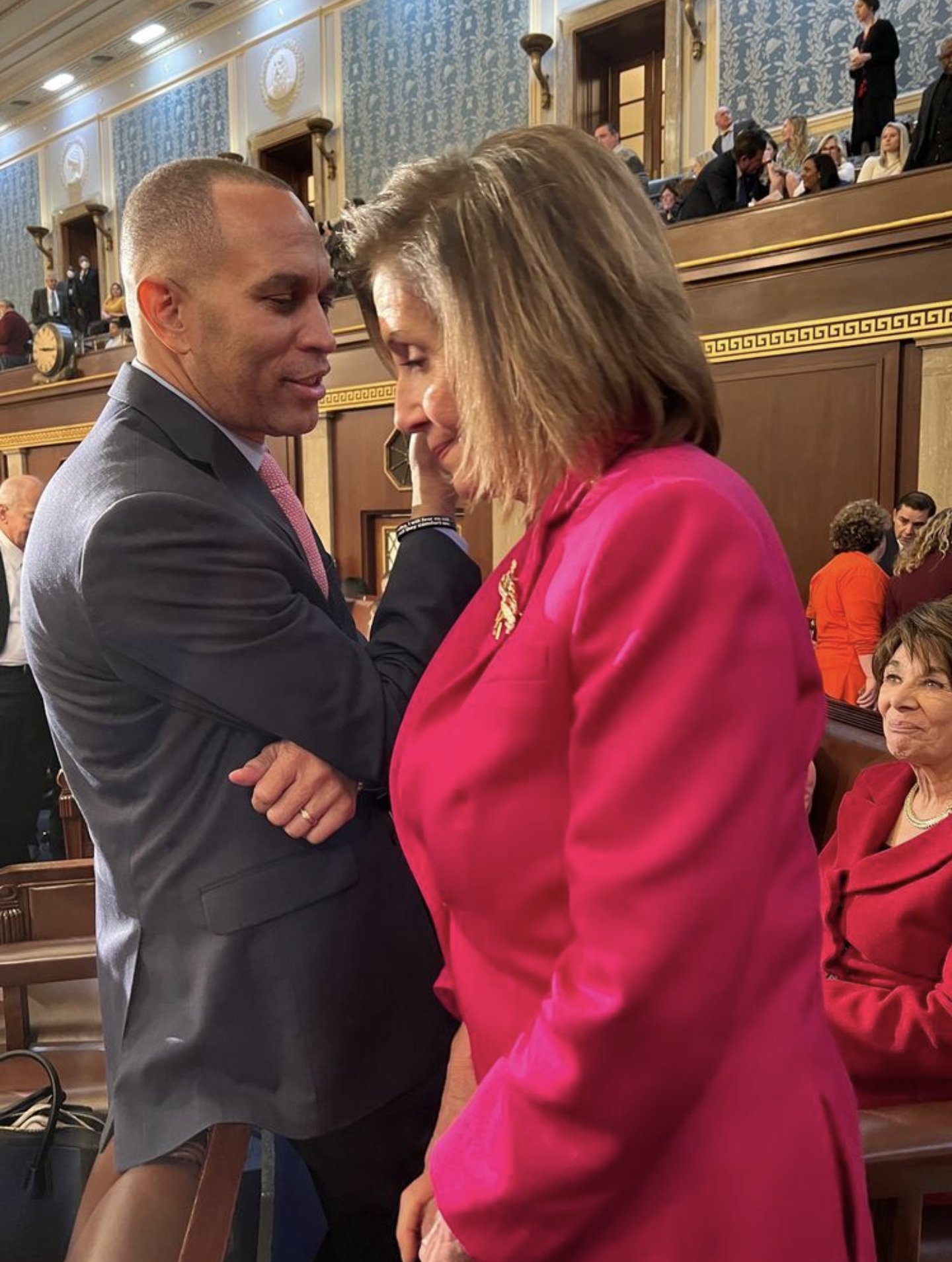 During the midterm elections, Republicans recaptured the House by a narrow margin. Democrats nominated Rep. Hakeem Jeffries (D-N.Y.) as the minority leader of the House of Representatives, succeeding Rep. Nancy Pelosi (D-Calif.), who was long majority leader.

Jeffries made history as the first Black lawmaker to lead a party in either chamber of Congress, with Jewish Democrats lauding his appointment amid the transition to a Republican majority in the House.

“It’s a historic day,” Democratic Majority for Israel President and CEO Mark Mellman said in a statement, calling Jeffries “a strong and effective fighter for the Democratic agenda and a staunch supporter of the critical relationship between the United States and Israel.”

Yet in January 2019, Jeffries was among the Democratic leaders in the House who defended Reps. Rashida Tlaib (D-Mich.) and Ilhan Omar (D-Minn.) as they faced scrutiny over their antisemitic and anti-Israel statements.

Since 1839, the House has elected its speaker at the beginning of each new Congress. This is done traditionally during a roll call after the party caucuses and conferences select a candidate from their senior leadership.

Representatives are not restricted to voting for a candidate nominated by their party. That is what happened starting on Jan. 3, when 19 Republican House members voted for candidates other than McCarthy in a series of 14 votes over a period of four days.

Without a speaker, members-elect of Congress cannot be sworn in.

McCarthy eventually secured the absolute majority needed to be sworn in as speaker in exchange for a series of concessions including giving lawmakers 72 hours to review bills before they reach the House floor, a rule that says any move to raise the debt ceiling must be accompanied by spending cuts, and votes on key conservative issues such as border security and abortion.

He also agreed to vote individually on 12 appropriation bills rather than on one omnibus spending bill—a direct response to the $1.7 trillion spending bill recently signed into law by President Joe Biden. While the bipartisan omnibus spending bill was praised by most Jewish groups such as the Jewish Federations of North America (JFNA) and the Orthodox Union (OU) for its funding of synagogue security and Holocaust survivors, it was slammed by the Zionist Organization of America (ZOA) for funding multinational organizations such as the United Nations despite their animus against Israel.

JFNA did, however, express disappointment that “critical priorities” such as the Afghan Adjustment Act were not included in the bill.

In a Senate race that split Georgia’s Jewish community on party lines, Sen. Raphael Warnock was reelected with a razor-thin margin to a full six-year term against Republican candidate and former football star Herschel Walker. This marks the first election since 1935 in which the party in power did not lose a single Senate seat.

In May 2018, Warnock delivered another sermon in which he accused Israel of shooting nonviolent Palestinian protesters. The sermon was given shortly after the U.S. embassy was moved from Tel Aviv to Israel’s capital city Jerusalem. Warnock also compared the Palestinian cause to the Black Lives Matter Movement. In 2019, Warnock signed a letter that likened Israeli control of the West Bank to “previous oppressive regimes” such as “apartheid South Africa.”

In response to an inquiry from Jewish Insider, which first reported on the resurfaced video of the May 2018 sermon, a Warnock campaign spokesperson rejected allegations that he was anti-Israel and shared an editorial written by Warnock titled “I Stand with Israel.” In the article, Warnock rejects the false claim that Israel is an apartheid state and strongly opposes BDS.

Nearly 170 rabbis and cantors signed a letter circulated by the Jewish Democratic Council of America in support of Warnock.

With Warnock sworn into the Senate, Democrats (including two independents who caucus with the party) have a 51-49 seat majority.

Thirty-three Jewish lawmakers have been sworn into the new Congress, according to the Pew Research Center, one fewer than in the outgoing Congress. Jewish Americans continue to account for about 6% of all U.S. representatives and senators while making up about 2% of the adult population.

Twelve percent of the Democrats are Jewish, as are two Republicans—returning Rep. David Kustoff of Tennessee and freshman Rep. Max Miller of Ohio. Jews have a wider presence in the Senate (9%) than in the House (5.5%). According to an exit poll by Fox News, the Republican share of the Jewish vote rose to 33% in the midterms.

The 118th Congress also has Rep. George Santos of New York, who identified as Jewish during the campaign but is now categorized as “Don’t know/refused” following his admission that he lied about his supposed Jewish heritage and that his grandparents fled the Nazis. Newly-elected Rep. Anna Paulina Luna from Florida identifies alternatively as the Congress’ first “Messianic Jew” and a Christian.

“Look at Congresswoman Omar, her antisemitic comments that have gone forward. We’re not going to allow her to be on Foreign Affairs,” McCarthy said in reiterating his vow during an appearance on Fox News Channel’s “Sunday Morning Futures” on Nov. 20.

Omar’s antisemitic and anti-Israel comments include accusing the Jewish state of having “hypnotized the world,” Jews of buying control of Congress and Israel of being an “apartheid state,” and likening Israel to the Taliban and Hamas terrorist groups.

AIPAC, B’nai B’rith, the Republican Jewish Coalition and ZOA have called on McCarthy to dismiss Omar from the House Foreign Affairs Committee.