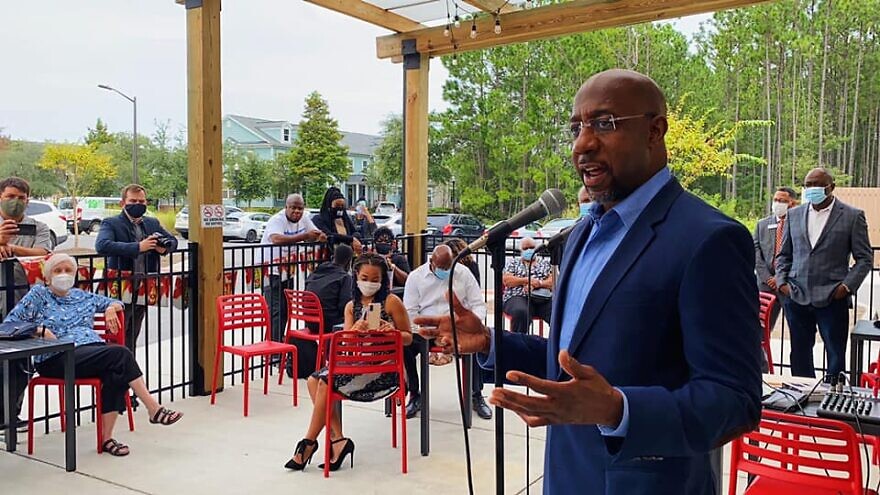 (November 10, 2020 / JNS) Georgia Democratic Senate candidate Rev. Raphael Warnock, who advanced last week to a January runoff against Republican Sen. Kelly Loeffler, clarified his stances on Israel on Monday after a video of a May 2018 sermon given by him in which he accused Israel of shooting non-violent Palestinian protesters.

Warnock gave the sermon shortly after the U.S. embassy in Israel was moved from Tel Aviv to Jerusalem.

“It’s been a tough week,” he said. “The administration opened up the U.S. embassy in Jerusalem. Standing there [were] the president’s family and a few mealy-mouthed evangelical preachers who are responsible for the mess that we found ourselves in, both there and here—misquoting and misinterpreting the Scripture, talking about peace.”

Warnock then compared the Palestinian cause to the Black Lives Matter Movement.

Warnock called for “a two-state solution where all of God’s children can live together” and accused Israel of shooting “unarmed Palestinian sisters and brothers like birds of prey. And I don’t care who does it, it is wrong. It is wrong to shoot down God’s children like they don’t matter at all. And it’s no more anti-Semitic for me to say that than it is anti-white for me to say that black lives matter. Palestinian lives matter.”

In response to an inquiry from Jewish Insider, which first reported on the resurfaced video, a Warnock campaign spokesperson accused Loeffler’s campaign of “going through thousands of hours of footage trying to find a way to misrepresent who Reverend Warnock is and scare Georgians. But that does not change the fact that Reverend Warnock is a staunch ally and supporter of Israel, and the Jewish community in our state. Reverend Warnock agrees with Dr. King that ‘Israel’s right to exist as a state in security is incontestable,’ and believes a two-state solution is the path to enduring peace.”

Additionally, Warnock’s campaign shared on Monday an editorial by the Democrat titled “I Stand With Israel.”

Despite signing onto a statement that compared Israeli control of the West Bank to “apartheid South Africa,” in the editorial, Warnock wrote, “Claims that I believe Israel is an apartheid state are patently false—I do not believe that.”

“I understand and recognize Israel’s unique historical importance as the greatest proponent of democracy in the Middle East and America’s most important partner in the region. I understand the many threats that face Israel, and as a U.S. senator, I will work to ensure Iran does not obtain a nuclear weapon,” he wrote.

He called the BDS movement against Israel as “​anti-Semitic” and a “refusal to acknowledge Israel’s right to exist.”

And he expressed opposition to conditioning U.S. assistance to Israel.