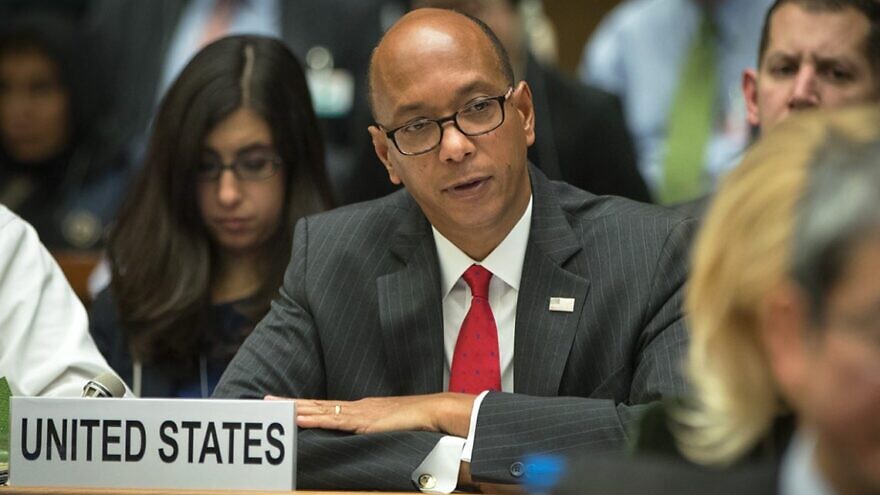 (December 20, 2022 / JNS) A pair of Israel antagonists bid farewell to the United Nations Security Council on Monday, but it was the Jewish state’s closest ally that made headlines.

In the council’s monthly meeting on the Israel-Palestinian file, Robert Wood, the alternative representative of the U.S. for special political affairs in the U.N., demanded Israel provide “equal allocation of resources” to countering Israeli “extremists” and Palestinian terrorists.

During a call for action to decrease violence and tensions in Judea and Samaria, Wood told the council that “the United States expects to see equal treatment of extremists—whether Israeli or Palestinian—in arrests, convictions and punishments, as well as equal allocation of resources to prevent and investigate violent attacks.”

The message from Washington, which has been largely supportive of Israel at the Security Council under President Joe Biden, stood out and can be read as a warning to Israel’s presumptive incoming government, which aims to alter the structure of governance in Judea and Samaria and hand greater police and civil authority powers to members of Benjamin Netanyahu’s presumptive coalition who have long called for harsher crackdowns on Palestinian terrorism and more freedoms for Israelis living in communities beyond the Green Line.

Wood did condemn a Palestinian effort to request an International Court of Justice advisory opinion against Israel, describing the proposal as “counterproductive.”

Meanwhile, Ireland and Norway joined India, Kenya and Mexico in what will likely be their final meeting on the file before their departures from the Security Council at year’s end.

Mona Juul, Norway’s ambassador to the U.N. and an Oslo Accords negotiator, recalled the failed accords in her farewell speech, saying that “at the time, courageous negotiators from the PLO and the state of Israel, considered by each other as a terrorist organization and an illegitimate state, respectively, came together to agree to disagree on the past—but also, to agree on a way forward towards a two-state solution based on U.N. resolutions.”

Irish Ambassador Fergal Mythen, meanwhile, lamented that “while we would have liked to acknowledge progress on this file, the reality is that the prospects of reopening a political horizon and achieving a two-state solution are as remote today as when we joined the council two years ago.”

Meanwhile, Russia, which has been harshly critical of Israel since Moscow’s invasion of Ukraine and Israel’s lack of backing for it, told the council that “Israel’s arbitrary unlawful activities reach beyond the limits of the West Bank and Gaza Strip, having an impact on the neighboring Arab states. This includes numerous violations of their sovereignty, i.e. launching of attacks against the territory of Syria and Lebanon.”

Ambassador Vassily Nebenzia was referring to Israeli strikes on Iranian targets, a sensitive matter to Russia given its alliance with Tehran, which is coming under heavy scrutiny at the U.N.

Nebenzia again blasted Washington for freezing Moscow out of any potential Israeli-Palestinian talks, claiming that “Russia is committed to resolving the Middle Eastern conflict in accordance with provisions of international law.”

Russia is a member of the dormant Quartet of international intermediaries for the Middle East, which also includes the U.S., European Union and the U.N. Ironically, Ukraine, which continues to vote against Israel in U.N. forums, gave approval recently for a resolution to have Moscow host Israeli-Palestinian peace talks.

While Kyiv has elected to drive a wedge into its relationship with Jerusalem as its demands for Israeli weaponry go unfulfilled, Albania has drawn closer to Israel since it was hit with Iranian cyberattacks earlier this year.

On Monday, Albanian Ambassador Ferit Hoxha largely steered clear of criticism of Israel, calling for the safeguarding of U.N. premises after a Hamas terror tunnel was recently discovered under an UNRWA school in Gaza.

“Education institutions, just like U.N. premises, cannot and must be not used for military purposes, even less for terror acts; children cannot and must not be used as human shields,” said Hoxha.

He also was one of the few to recognize the role Palestinian terrorism is playing in the current round of violence, reiterating Albania’s “full and unreserved condemnation of any terrorist attacks on Israel and its people.

“Terror cannot be justified and must only be condemned, by all,” Hoxha said. “Albania stands with Israel, as it would stand with any other country in such a situation, in the legitimate right to self-defense through proportionate measures.”