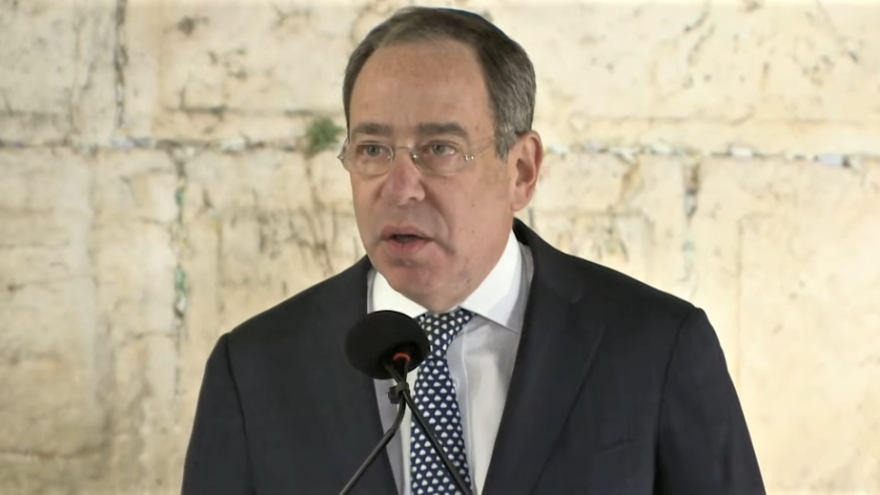 U.S. Ambassador to Israel Thomas Nides at the Western Wall in Jerusalem, where he lit a candle at a ceremony during Hanukkah. Source: Screenshot.
Spread the word.
Help JNS grow!
Share now:

(December 10, 2021 / JNS) U.S. Ambassador to Israel Thomas Nides took part in a Hanukkah menorah-lighting at the Western Wall on Dec. 4, the seventh night of the eight-day holiday.

Speaking during the ceremony, the ambassador said he first came to Israel more than 40 years ago when he was just a 15-year-old “little Jewish kid from Duluth, Minn.”

“Now, I’ve returned here to live in Jerusalem and to serve as the U.S. ambassador. I have been honored to be invited to light the candles here at the Western Wall,” he said. “Now that is a Hanukkah miracle.”

Nides also took part in menorah-lightings at Yad Vashem, the World Holocaust Remembrance Center, in Jerusalem, where he talked about the need to combat “global anti-Semitism and Holocaust distortion and denial,” and in Kibbutz Ein HaShofet in northern Israel where he worked during his visit as a teenager.

He referred to the kibbutz when he told the crowd at the Western Wall: “The values of tzedakah and avodah—charity and hard work—that I learned there are the ones that you never forget … that trip shaped part of my Jewish identity.”