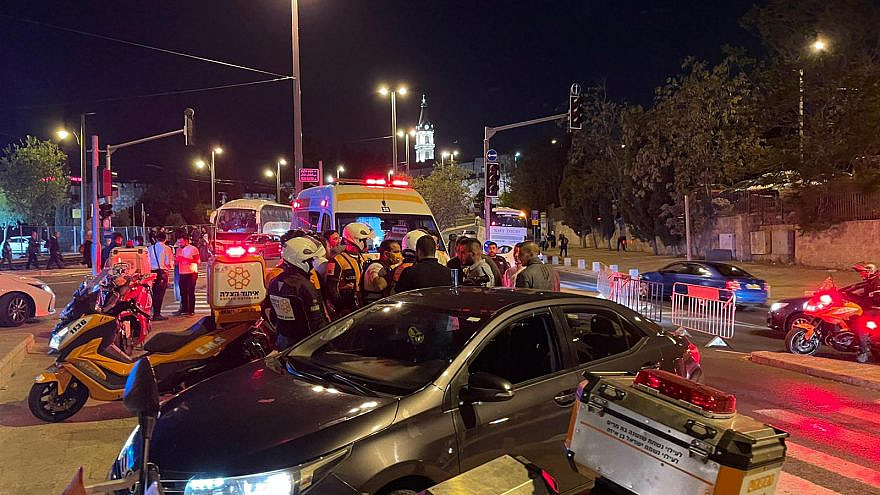 (April 27, 2021 / JNS) Jerusalem has seen nightly violent clashes between Arabs and Jews in the past two weeks with the epicenter of confrontation taking place near the Old City’s Damascus Gate.

JNS reported that the violence began on April 13, the start of the Muslim holy month of Ramadan, and according to police, was sparked in part by a new social-media trend among young Arabs that involves physically assaulting visibly Orthodox Jews and posting the attacks on TikTok.

Israel’s police forces have also been in the middle of the fray trying to maintain the peace while at times also being the direct target of the attacks themselves. Tensions have simmered over the past 24 hours (significantly less violence was reported on Monday evening) with the city returning to an uneasy calm.

However, the past two weeks have been especially busy for Jerusalem’s emergency first-responders, who have been treating those injured during the riots.

One of those helping medically on the front lines is Khaled Rishek, a devout Muslim, who for the past 12 years has served as a paramedic with United Hatzalah, a volunteer-based, national emergency medical-services provider. The organization is comprised of volunteers from all groups and religions in Israel. In total, there are more than 6,000 volunteers, including nearly 700 Muslims.

When not speeding towards the scene of an emergency, Rishek—a married father of two who lives in Jerusalem’s Abu Tor neighborhood—is a full-time cultural programs director at the Jerusalem International YMCA.

Even though he has spent the past two weeks fasting during daylight hours per the Ramadan tradition, he has mustered up the strength to be on call in downtown Jerusalem—specifically, in the area of the Old City—and has provided emergency treatment to people on all sides of the conflict.

Rishek told JNS, “I’m a Palestinian Muslim from Jerusalem and since it’s Ramadan, we fast, and every evening, many people go and pray at the Al-Aqsa Mosque. I asked [Hatzalah] to station me there because I know the area very well.”

Equipped with an ambucycle (a motorcycle fitted with life-saving equipment) to avoid traffic, Rishek has treated scores of wounded in the past two weeks. He said that he has spent a considerable about of time treating those injured in rock-throwing attacks, in particular those suffering from head injuries. 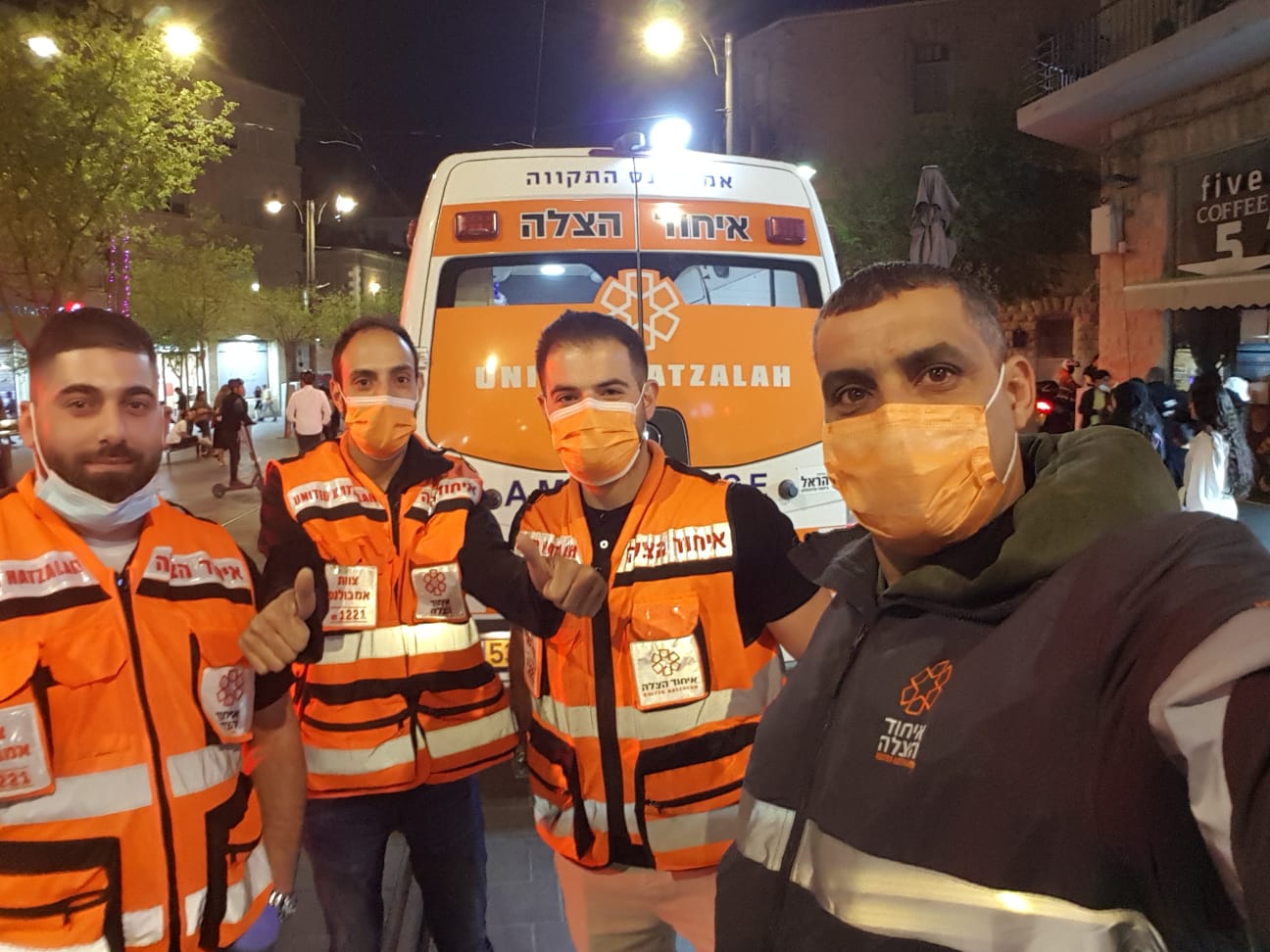 Jewish and Muslim volunteers on an ambulance shift in Jerusalem. Credit: United Hatzalah.

“Last Thursday night, a bus was attacked by rocks on the Mount of Olives, and six ultra-orthodox Jews were injured,” he said, explaining that he was on the scene quickly to attend to the wounded.

Along those lines, he shared that on the same day, he assisted a young Arab man who had broken his arm in a scuffle.

Rishek makes a point to say that he is emphatic to all and treats peoples in need of emergency care regardless of their background. “I am not in any way connected to politics,” he stressed. “When I treat a person, there is no politics there. For me, as an Arab and a Jerusalemite, it’s important for me to treat all populations; it doesn’t matter who they are. I see this as holy work.”

‘The highest level of medical care,’ all politics aside

Raphael Poch, volunteer emergency medical technician and the International Media Spokesperson for United Hatzalah, told JNS that “the Muslim volunteers play an incredibly important role, especially in Jerusalem, where it has at times, such as during the Second Intifada, proved to be dangerous for Jews to enter into Muslim neighborhoods of the city. For this reason, it has become the protocol that ambulances need to wait for a police escort before they can enter an Arab neighborhood in east[ern] Jerusalem.”

He explained that this, of course, “caused a severe delay in emergency medical response times, and many people lost their lives due to waiting for help to arrive when they were suffering from a medical emergency such as a heart attack, strokes, drownings and instances of choking.”

He said about 10 years ago, “a Muslim medical practitioner … approached [Hatzalah founder] Eli Beer and asked for his help in bringing the concept of United Hatzalah and emergency medical first-responders from the community into the neighborhoods of east[ern] Jerusalem. They approached David Friedman, who later became the U.S. ambassador to Israel, and he helped arrange for the funding of the first Muslim chapter in east Jerusalem of United Hatzalah.” 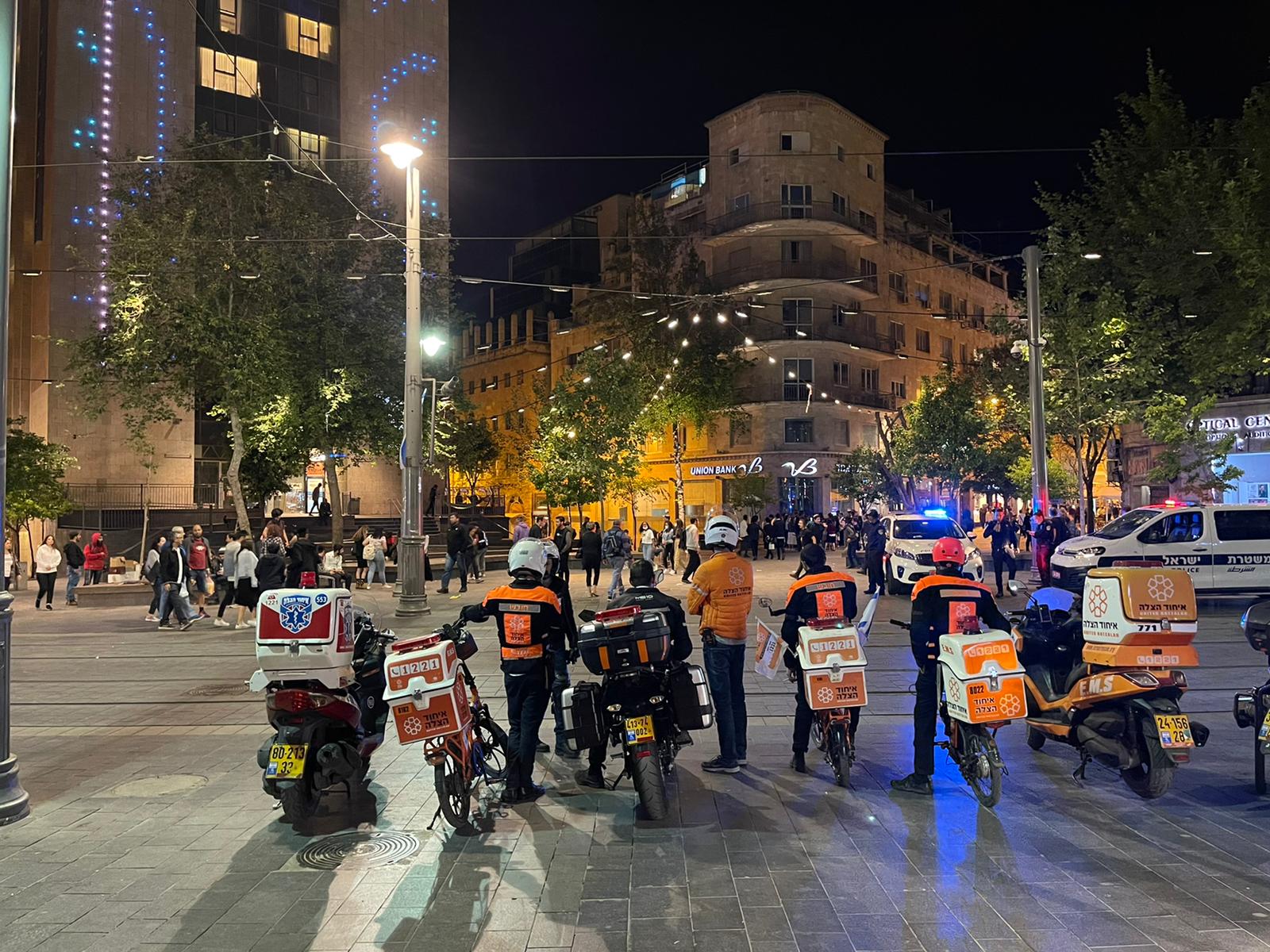 Poch said “volunteers like Khaled Rishek and the many others who have joined him since the chapter’s inception in 2007 provide the first line of care to Muslims who need emergency medical assistance. This includes during times of political or religious unrest.”

On how volunteers are able to keep personal politics out of the equation when called upon to save lives, Poch explained that “when a person signs up for a volunteer position such as an emergency responder, they tend to recognize the value of human life, regardless of who the person is that they are helping.”

“When we rush out, we don’t know who we are saving,” he continued. “Regardless of their past, and who they are or where they are from, we need to provide them with the highest level of medical care that we are able to. When we are treating patients, we look at them all as human beings, regardless of what happened before.”

Rishek noted that he was very happy that on Monday evening, he didn’t have to run out and treat anyone. “I saw that everyone relaxed a bit, and hopefully, we are going back to normal, or as close to it as possible.”

He added that “there are another two weeks of Ramadan, a period I like very much. I hope that businesses and stores will be opened, and the focus will be on what Ramadan is meant to symbolize—welcoming guests into our homes, prayers, brotherhood and helping the poor.”

In that light, he said, “I would rather get emergency calls for good things like births, and that all of these other incidents would stop.”