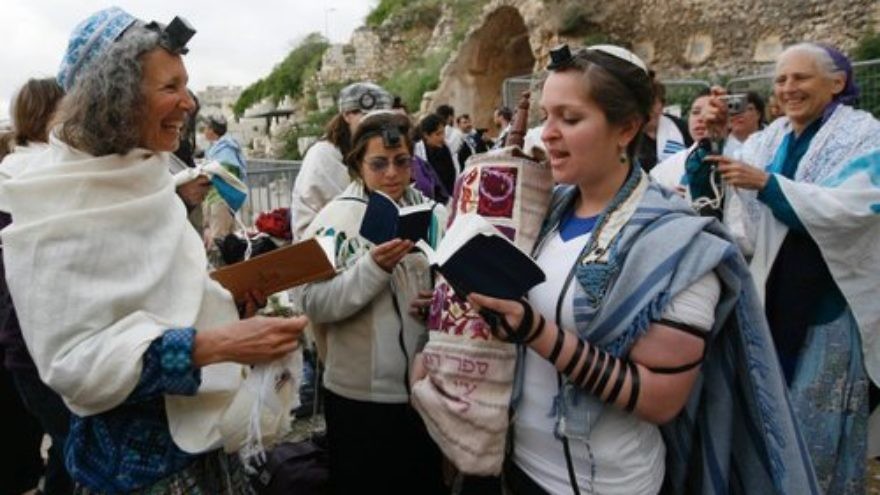 (October 8, 2013 / JNS) Women of the Wall faced a tough choice this Rosh Chodesh

Though I don’t agree with their goals, they could have finally been able to do as they please.

They could have prayed exactly as they wanted, with tefillin and tallit.

They could have read from a Torah scroll (theirs is damaged by water, but many others are available in the holy city of Jerusalem).

They could have touched the stones of the Western Wall and kissed them, uttering a fervent supplication.

They could have sung and danced and rejoiced in the new month of Cheshvan.

They could have expressed their religious yearnings as they see fit.

They could have foregone the confrontations of previous years and done things their way without anyone blinking an eye.

They could have done all that at the new plaza at the Western Wall, built a month ago by the Israeli government and embraced by many leaders of the Conservative and Reform movements. The new section that solved all the technical objections voiced by Women of the Wall over the years: 24/7 open hours, free access, and a wheelchair ramp.

And then there was the other option.

To interject themselves into a crowd of 10,000 women praying in accordance with the tradition of the site.

To remain at the back, far from the Wall.

To sing ever so loudly and disturb all those who left home in the wee hours of the morning to pray.

To forego the Torah reading and make do with reading from a printed chumash (Torah).

To disregard the feelings of others.

To turn the holiest site available to the Jewish People into a media circus, with four camera people of their own and a slew of media reporters.

To give interviews to the already anti-Israel biased European media and perpetuate the contention that Israel tramples religious freedoms and oppresses women.

To drive a wedge between Israel and American Jewry and to alienate this community from Israel, the greatest source of its Jewish identity.

To play the victimhood card.

Unfortunately for all of us, Women of the Wall picked the second option.

Our choices are all we have. They define who we are and what we stand for. Women of the Wall could have chosen the path towards unity, respect, and spirituality. They could have fulfilled their own wishes, while showing concern for those of others.

They could have chosen to show respect to thousands of their sisters with whom they don’t agree, but who pray at the Western Wall by the thousands every day of the year.

They could have become the vehicle for a solution, rather than part of the problem.

And they rejected this choice to our collective detriment, deciding instead to continue the confrontation.

On Monday, Women of the Wall announced that they would move to the new plaza if and when “all of their conditions and specifications are met.” Though the organization is claiming to “lead the Jewish People towards change,” there is nothing new here. For the past year, Women of the Wall have been speaking out of both sides of their mouth, paying lip service to the solution proposed by Jewish Agency Chairman Natan Sharansky, while at the same time presenting far-fetched demands and refusing any semblance of compromise.

When Israel’s Minister of Religion Naftali Bennett asked the group to present its demands, Women of the Wall stipulated 4 Ts: Torah, Tallit, Tefillin, and Tefilla (prayer). Bennett immediately agreed to grant Women of the Wall all four Ts at the new plaza or two Ts (tallit and tefilla) in the mainstream women’s section. Needless to say, Women of the Wall were not interested.

Over the past month of the High Holidays, we had ample chance to introspect and analyze our choices, knowing that God gives us a second chance. And although Women of the Wall just chose to miss an opportunity to move away from conflict to cooperation, they will have another chance come next Rosh Chodesh.

But becoming an agent of change requires doing, not speaking. If the Women of the Wall truly care about spirituality, if they respect the rights of the overwhelming majority of women praying at the Wall to carry on with their own tradition, if they want to remedy the relations between Israel and U.S. Jewry, let them do so through action.

That action would be praying exactly as they want at the new plaza, while continuing the negotiations with the government, if they wish.

Women of the Wall will get their second chance next month. I am praying that they will choose the path of tolerance, respect, and prayer.

Leah Aharoni is a cofounder of the grassroots movement WomenForTheWall.org, dedicated to preserving the sanctity and tradition at the Western Wall in the spirit of Jewish unity. She is a business coach, who helps female entrepreneurs build profitable and emotionally rewarding businesses by concentrating on their unique life mission and talents.