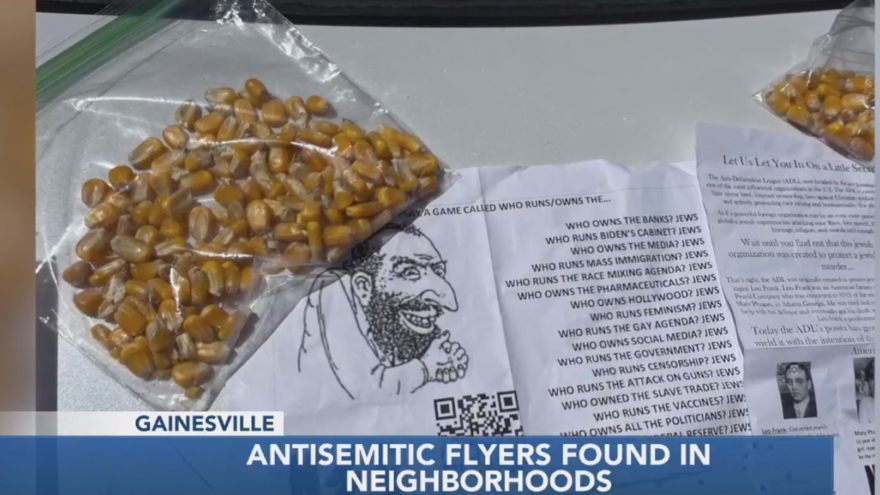 Two of the hate-filled fliers that were left outside homes in Gainesville, Fla., in August 2022. Source: Screenshot/WCJB.
Spread the word.
Help JNS grow!
Share now:

(August 10, 2022 / JNS) Hate-filled fliers from an anti-Semitic group were again left outside of homes in the Houston area.

According to the Houston Chronicle, the fliers, which said either “Let’s Go Brandon,” a slogan used to mock U.S. President Joe Biden, or “Every aspect of the Biden administration is Jewish,” were left in the Bellaire neighborhood, an area that community is home to several synagogues.

Similar papers were previously left outside of homes in the Houston area back in February.

In recent days, hate- and conspiracy-filled fliers blaming Jews for a variety of ills were left outside of homes in Nashville, Tenn.; Springfield, Mo.; and Gainesville, Fla. Many of the fliers were dropped by someone affiliated with the Goyim Defense League, a virulently anti-Semitic group.

As has been the pattern in previous cases, the fliers are put into plastic bags filled with corn or beans, and then tossed onto driveways and yards.

“The speech and sight of these corn-filled packages are just completely stomach-turning,” a Gainesville resident, identified only as Eva, told the local TV station WCJB.