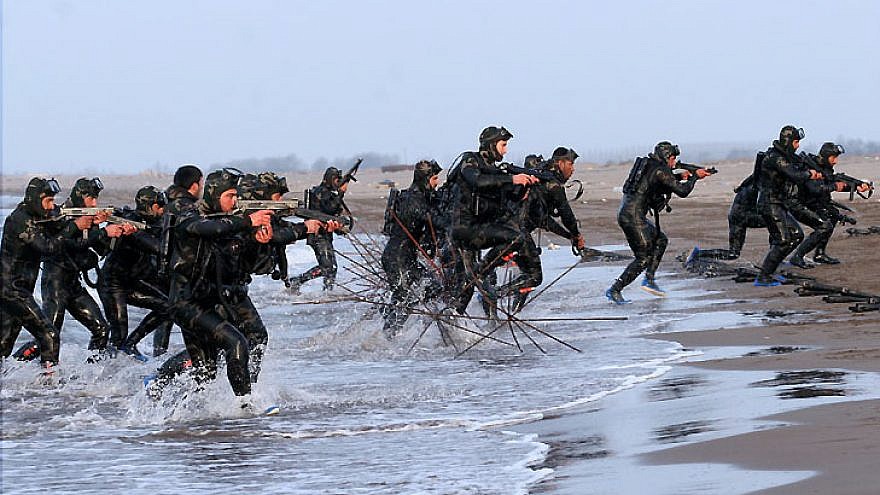 (January 24, 2023 / JNS) Norbert Röttgen, a Christian Democratic Union lawmaker in the German parliament, directly contradicted European Union foreign policy chief Josep Borrell’s assertion on Monday that the E.U. cannot classify Iran’s Islamic Revolutionary Guard Corps as a terrorist entity because of a lack of a court decision to that effect.

“All the legal requirements are fulfilled,” the German parliamentarian told JNS. “Currently the German attorney general is prosecuting terrorist attacks linked to the IRGC on several synagogues in the state of North Rhine-Westphalia, and in the U.S. there is a federal court decision against the IRGC for acts of terrorism.”

Röttgen, who was chairman of the Bundestag Foreign Affairs Committee from 2014 to 2021, added that “the German Foreign Ministry is pretending that there are legal obstacles to proscribing the IRGC. The foreign minister says that investigations or convictions in the E.U. are needed to list the Revolutionary Guards as a terrorist group, but the European Court of Justice has clarified that investigations or convictions can also be from outside the E.U. for a group to be put on the terror list.”

There is no legal unclarity. The German Foreign Ministry knows that the terror listing can be based on non-EU cases, but it doesn't say so publically. This is how they answered our parliamentary request. #IRGCterrorists https://t.co/mcFhJhMnnM pic.twitter.com/kPF8DJTwrQ

The Trump administration designated the IRGC as a terrorist organization in 2019.

There have been other court cases in Germany that prove the IRGC was involved in terrorism.

The IRGC contracted a Pakistani man living in Germany, Syed Mustafa H., to collect information on pro-Israel advocates in Germany, France and elsewhere in Western Europe. German prosecutors said the espionage was part of an assassination plot.

The Quds Force—an elite branch of the IRGC responsible for extraterritorial operations—paid Mustafa at least €2,052 in July 2015-July 2016. The IRGC frequently outsources its terrorist operations.

The E.U. on Monday declined to sanction the 125,000-strong Revolutionary Guards Corps without a court decision from an E.U. nation that declares it is engaged in terrorist activities.

“It is something that cannot be decided without a court…decision first. You cannot say I consider you a terrorist because I don’t like you,” said Borrell in Brussels.

The European Parliament passed a non-binding resolution last week, urging that the IRGC be included on the E.U.’s terror list. The commander of the IRGC and Iran’s parliamentary speaker threatened repercussions should the E.U. proscribe the IRGC as a terrorist entity.

Hannah Neumann, a member of the European Parliament for the German Green party, told the parliament: “How can we speak about reviving the JCPOA [the 2015 Iran nuclear deal] if the only thing that comes out is the international recognition that the [Tehran] regime urgently needs? The time for an ambiguous policy is over. As long as the brutal protests continue, we should not negotiate. As long as the IRGC terrorize their own people and the region, we should treat them as terrorists.”

The German Green party, including member Foreign Minister Annalena Baerbock, has long been an energetic supporter of the JCPOA.

Critics of German-Iran and EU-Iran cooperation have noted over the years that designation of the IRGC as a terrorist organization would harm the robust business relationship between the clerical regime in Tehran and European countries. According to recently published statistics from the Federal Statistical Office of Germany, Germany exported more than $1.2 billion in merchandise to Iran from January to October 2022. German imports exceeded $277 million in value during the same period.

Kazem Moussavi, a German-Iranian dissident who is the spokesman of the Green Party of Iran in Germany, told JNS, “I not only criticize the volume of the German trade relationship with Iran, but also the disregard of ethical principles by the German economic participants when doing business with the clerical-fascist system. While conducting business transactions, the serious human rights violations, eliminatory antisemitism, anti-Americanism and terrorism carried out by Iranian business partners have been largely ignored for many years.”

Moussavi says Berlin and the E.U. should proscribe the IRGC as a terrorist entity. “German governments have turned a blind eye to the oppression of the Iranian people due to power and strategic interests in the region and oil and gas deals with Tehran,” he said.