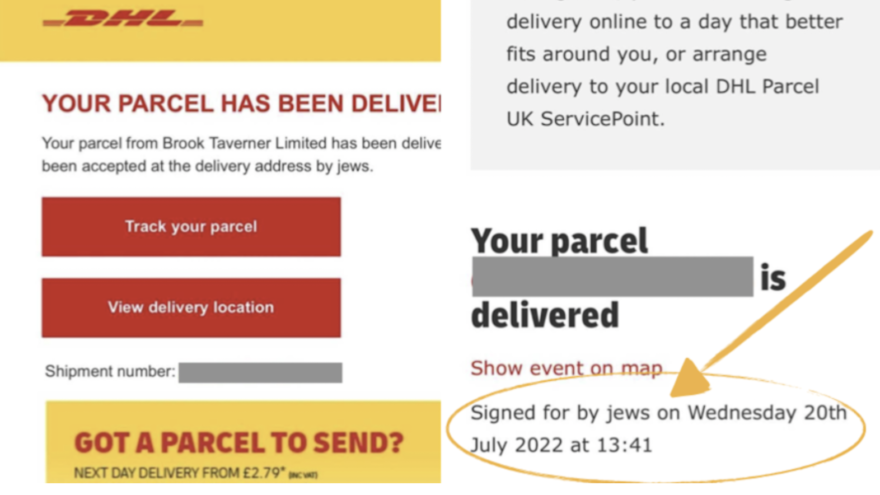 The wording on a package delivered to a Jewish individual in the United Kingdom. Credit: Campaign Against Antisemitism.
Spread the word.
Help JNS grow!
Share now:

(August 9, 2022 / JNS) The United Kingdom branch of the delivery company DHL has taken action against one of its employees after the delivery person wrote that a package was “signed for by Jews.”

According to the Campaign Against Antisemitism in the United Kingdom, two weeks ago, a resident of a heavily Jewish neighborhood in London saw a DHL driver throw the package onto the driveway without asking for a signature.

The package was damaged upon arrival. The resident received a confirmation of delivery and saw that the driver had written: “signed for by Jews.”

The resident reported the event to the Campaign Against Antisemitism, who reached out to the company.

A Campaign Against Antisemitism spokesperson told JNS that officials from DHL met with them and the resident on Aug. 5, where they were informed that the employee had been terminated. DHL also offered the resident an apology and compensation.

“This is not the first time that deliverymen, from any company, have made racial comments about Jewish people,” said the spokesperson. “For someone simply waiting to receive a package and relying on a basic service to have to endure antisemitic abuse is intolerable. We are grateful that the victim came forward and we applaud DHL for doing the right thing.”