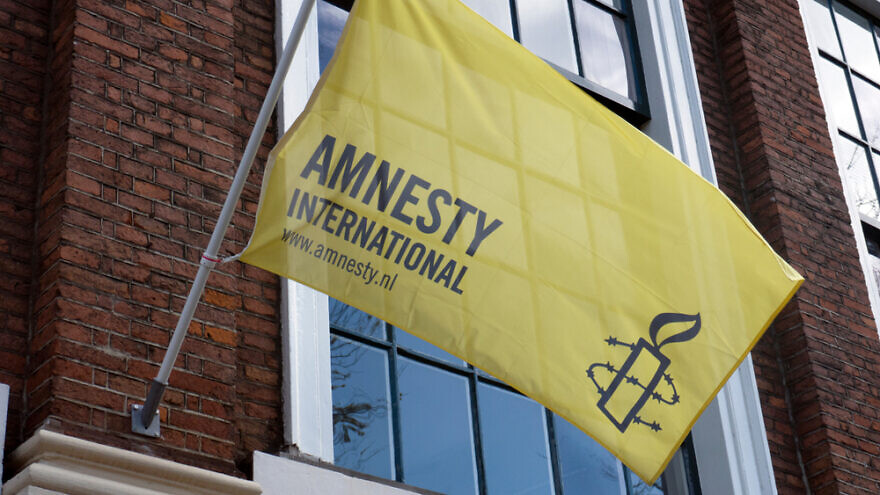 (May 6, 2022 / JNS) The government of the Netherlands has rejected Amnesty International’s report on Feb. 1 accusing Israel of apartheid. “The cabinet does not agree with Amnesty’s conclusion that there is apartheid in Israel or the territories occupied by Israel,” the government said in an April 29 letter signed by Minister of Foreign Affairs W.B. Hoekstra. The government noted that in rejecting the report, it joins “many other countries, including Germany, the U.K. and the U.S.”

Shaun Sacks, a senior researcher at NGO Monitor, told JNS: “The Netherlands is making it very clear that the so-called conclusions of Amnesty International are incorrect, the term apartheid is a very serious allegation and in some cases, a malicious term, and clearly doesn’t apply to Israel. Amnesty International overstepped their mandate by applying this serious label to Israel.”

The Amnesty report, titled “Israel’s apartheid against Palestinians: A cruel system of domination and crime against humanity,” claims to show the “true extent of Israel’s apartheid regime. Whether they live in Gaza, East Jerusalem and the rest of the West Bank, or Israel itself, Palestinians are treated as an inferior racial group and systematically deprived of their rights,” according to Agnès Callamard, Amnesty International’s secretary-general.

It’s the latest in a series of reports by human-rights groups that have grown progressively more extreme in their denunciations of the Jewish state. Republican senators are pushing a bill to cut funding for Amnesty, which has received more than $2.5 million in federal funding in the past two decades.

Sacks said he isn’t sure whether the outpouring of condemnation will cause Amnesty to moderate its position. He says: “Amnesty climbed up this tree. And they joined with the other malicious NGOs. The only thing new about this is that they’ve upped their rhetoric. Remember, Amnesty was involved in the initial Durban conference [in South Africa in 2001] where the Israel apartheid libel began, and they’ve never backed down from it. The most important thing, though, rather than wait for Amnesty to realize the error of its ways, is to constantly point out how nefarious and wrong the label is.”

The latest move follows a decision in January by the Dutch government to stop funding the Ramallah-based Union of Agricultural Work Committees (UAWC), one of six groups that Israel labeled in October as a terrorist entity. The Netherlands has been a major donor of pro-Palestinian NGOs and a leading donor of UAWC.

Joseph Soesan, a blogger and podcaster who reports from Israel to Dutch-speaking audiences, applauded the government decision but says it doesn’t represent a major shift in Dutch sentiment and could easily be undone by the anti-Israel actions of a new government.

However, he noted that Kaag, who is married to a senior PLO official, still has plenty of influence in the government as Minister of Finance.

Soesan said that while the average Dutch Christian is pro-Israel (a 2019 poll by the website statista.com found that 52% of Dutch have a “mostly favorable” attitude towards Jews), Dutch support for Palestinians is driven by the country’s Muslim population.

Some 40,000 Jews to 850,000 Muslims live in Holland. According to Soesan, “the Jews don’t count. For years already, when there is a Jewish holiday, there is no congratulation from the prime minister. When there is a Christian or Muslim holiday, he is the first to offer congratulations.”

Also, he says, the Netherlands follows the European Union’s lead on matters relating to the Arab-Israeli conflict. There the line is pro-Palestinian.

Soesan cites the media as another factor. “There is a new generation of journalists who grew up being anti-Israel and for Palestinians, and they reflect a general trend among the young Dutch population. “Hundreds of thousands—maybe a million Dutch young people—are leftists, who are absolutely against Israel. Anti-Semitism in Holland went up 35% last year.”

“I’m pessimistic,” concluded Soesan. Referring to the anti-Israel animus in Holland that erupted last May during Israel’s 11-day conflict with Hamas in the Gaza Strip, he said: “When there is a next war here, I will advise all the Jews in Holland, ‘Flee, flee to Israel. Or wherever you want to go. But don’t stay in Holland.’ ”