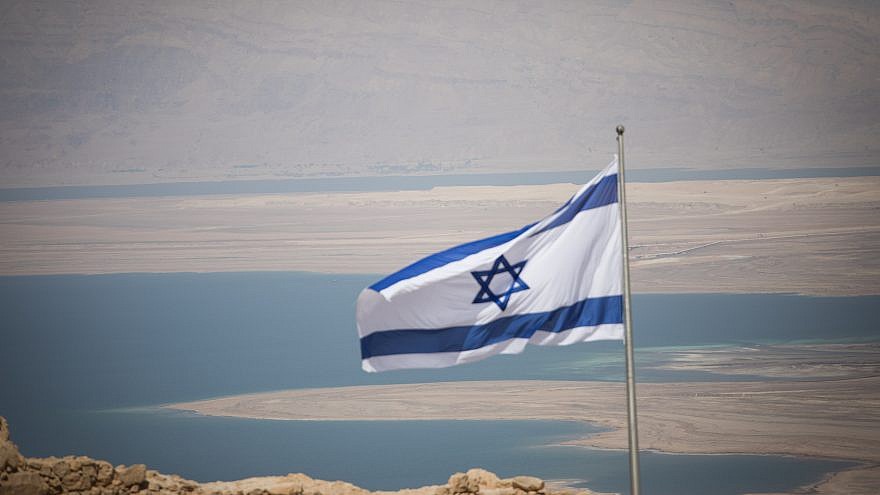 An Israeli flag on Masada, near the Dead Sea in southern Israel, on July 19, 2018. Photo by Yonatan Sindel/Flash90.
Spread the word.
Help JNS grow!
Share now:

The events, which will last about an hour, are part of FIDF’s temporary digital alternative to community events and galas across the United States that have been postponed due to the outbreak of the coronavirus.

Taking part in the virtual Yom Hazikaron ceremony will be Shmuel Katz, FIDF national board member of Miami, who will recite Yizkor, and FIDF national director and CEO Maj. Gen. Meir Klifi-Amir. Songs will be performed by Lt. Col. Shai Abramson, the IDF’s chief cantor, and the IDF Musical Ensemble.

Reciting the Kaddish will be Alon Carmeli, whose son, Sean Carmeli of Texas, was killed during “Operation Protective Edge” in Gaza in 2014. Carmeli was a lone soldier, one who voluntarily enlists in the Israeli army without immediate family in Israel.

Among speakers at the virtual Yom Ha’atzmaut celebration will be Klifi-Amir, Brig. Gen. Rotem Yaniv and Cpl. Michael, a lone soldier from the Boston area.

The IDF Musical Ensemble will perform with Eden Alene, an active soldier who will represent Israel in the next Eurovision Song Contest. Comedian and former lone soldier Joel Chasnoff will emcee the ceremony.

FIDF launched a free, virtual event series and online portal to provide official information and connection to IDF soldiers and Israeli officials amid the coronavirus outbreak.