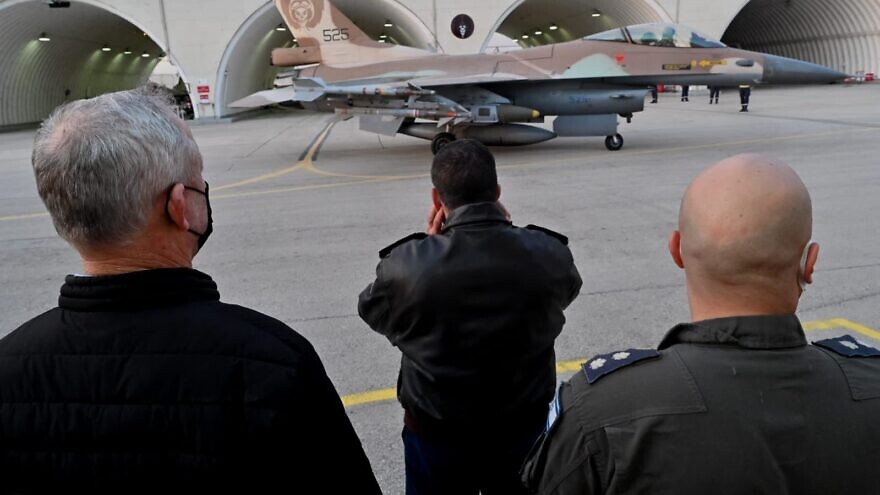 (December 29, 2021 / JNS) The Iranian regime is unable to supply basic goods and services like education and water to its citizens, “but it is continuing to invest a fortune in the nuclear program and in its proxies,” Israeli Defense Minister Benny Gantz stated on Tuesday.

During a tour of Ramat David Air Force Base in northern Israel, Gantz described the Islamic Republic as “the biggest enemy of the nations and residents of the Middle East,” and called on regional states to “stop Iran’s harm of their sovereignty and inhabitants.”

During the tour, conducted together with Air Force Commander Maj. Gen. Amikam Norkin, and the head of the Strategic and Iran Branch, Maj. Gen. Tal Kelman, air force officials displayed a range of combat means, and provided an operational briefing.

“This years as well we have acted against threats against various fronts, which are all fueled by Iran,” said Gantz. “Iran undermines sovereignty in Syria, Lebanon, Yemen, and in other countries. It is seeking to ignite the region on the alter of the interests of its leaders,” he added.

“Israel will not allow Iran to stream game-changing weapons to its proxies and to threaten its citizens,” Gantz said, speaking hours after media reports said Israeli jets struck containers at Syria’s main commercial port at Latakia, on the Mediterranean coast.