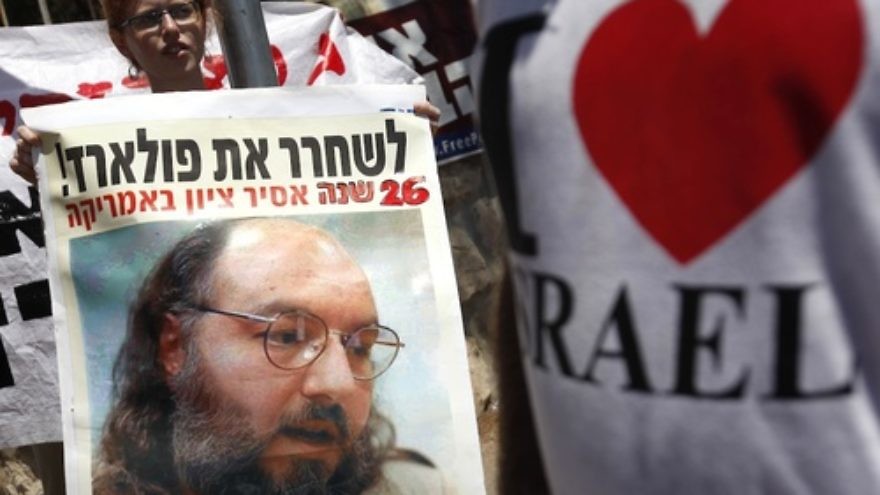 Demonstrators hold signs of Jonathan Pollard as they attend a protest calling for his release outside the house of Israeli President Shimon Peres in Jerusalem, where he met with U.S. congressmen in part to discuss the situation, Aug. 17, 2011. Photo by Miriam Alster/Flash90.
Spread the word.
Help JNS grow!
Share now:

(December 31, 2020 / Israel Hayom) Jonathan Pollard landed in Israel on Wednesday morning accompanied by his wife, Esther. Pollard was released one month after his parole restrictions were lifted and five years after he was released from federal prison, after serving 30 years for spying for Israel.

“I believed with all my heart that this moment would arrive, and it did; it is happening here and now,” said Effi Lahav, head of Free Pollard Now, an activist group that had campaigned for Pollard’s release.

“We are experiencing a historic moment. I cannot believe it, Jonathan and Esther are here in Israel. It should have happened a long time ago, but better late than never. And ‘never’ was never an option at our headquarters,” said Lahav.

Lahav served in the Israel Defense Forces as a paratrooper and fought in the First Lebanon War. He has held several public service positions, including as a spokesman for the Jerusalem Municipality and the Health Ministry. He led efforts to secure Pollard’s release for many years.

Pollard and his wife were greeted at the airport by Israeli Prime Minister Benjamin Netanyahu, who presented them with their Israeli ID cards and said, “Welcome home. It’s so good to finally see you here. Now you can start over and live your lives free and happy. Now you’re home.”

“We’re excited to finally be home after 35 years,” said Pollard upon arrival. “We thank the Israeli people and the Israeli prime minister for bringing us home. No one is as proud of this country and its leader as we are.

“We hope to become productive citizens as soon as possible and move on with our lives. This is a great country with a bright future. [Israel] is the future of the Jewish people, and we’re not going anywhere.”