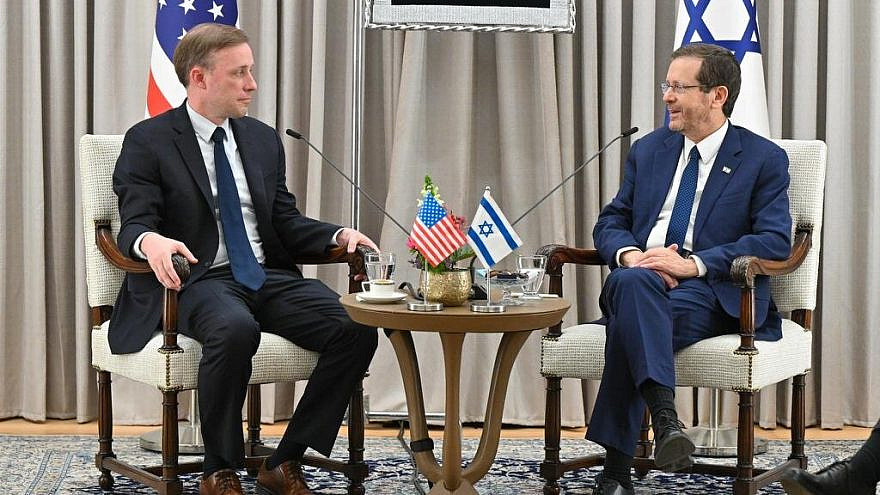 The two men held an expanded meeting along with their respective teams and then spoke privately.

“We welcome the national security advisor of the United States, Jake Sullivan, a great friend of Israel and a big expert on world affairs and security and Middle Eastern affairs. You are coming at the right time, as we meet so many challenges together. I welcome you wholeheartedly to our country,” said Herzog.

Sullivan extended regards on behalf of U.S. President Joe Biden, who “remembers fondly [Herzog’s] visit to the Oval [Office] and looks forward to welcoming [him] back soon, and also to coming back to Israel after his very successful trip last year.”

Herzog met with Biden at the White House in October, describing his invitation to Washington as “an expression of true friendship.”

“You are a true friend of Israel, Mr. President. The United States is our closest and strongest historical ally,” Herzog told Biden in remarks to the press ahead of their tête-à-tête.

During Biden’s visit to the Jewish state in July, Herzog presented him with Israel’s Presidential Medal of Honor.

Sullivan said last week that the Iranian nuclear threat would be a “substantial topic of conversation” during his visit.

“We’ll have the opportunity to engage deeply with the new Israeli government on the threat posed by Iran. And I think we share the same fundamental objectives. And we will work through any differences we have on tactics, the same way that we have over the course of the past two years,” he said.

U.S. Secretary of State Antony Blinken said on Tuesday that Tehran had “killed” the opportunity to quickly revive the 2015 nuclear deal, formally known as the Joint Comprehensive Plan of Action (JCPOA).

“With regard to the JCPOA, the Iranians killed the opportunity to come back to that agreement swiftly many months ago. There was an opportunity on the table that they rejected, an opportunity that was approved by all who were involved—the Europeans, the United States, Russia and China even at the time. And so, the JCPOA has not been on the agenda as a practical matter for many months now. It’s not our focus,” said Blinken.

He added that the Islamic Republic was making “very significant” progress on its nuclear program.

Israeli Prime Minister Benjamin Netanyahu, who is scheduled to meet with Sullivan, met on Wednesday with a visiting bipartisan U.S. Senate delegation and presented evidence regarding the Iranian threat and how it can be combated by fielding a credible military option and using economic and diplomatic pressure.