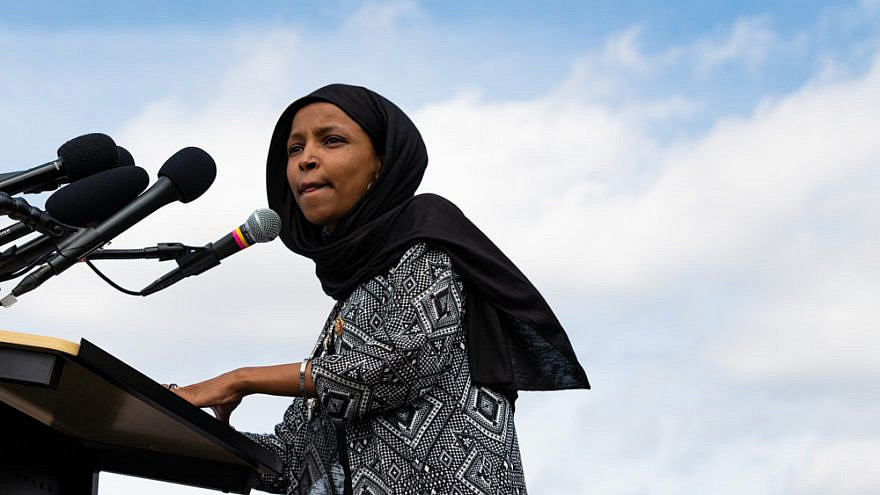 (July 1, 2021 / JNS) Rep. Ilhan Omar (D-Minn.) is being blasted by Jewish leaders after she made statements questioning her Jewish colleagues’ commitment to social justice.

In an interview on CNN’s “The Lead With Jake Tapper” on Tuesday, Omar said that she had no regrets about her tweet earlier this month comparing the United States and Israel to the terrorist organizations Hamas and the Taliban—for which she was widely condemned by Jewish Democrats and the Democratic leaders in the U.S. House of Representatives.

Tapper listed the times Omar had made statements perceived as anti-Semitic on Twitter in the past, including implying that lawmakers support Israel because of money in 2019 and in that Israel had “hypnotized the world” in 2012, and asked her whether she understands why her colleagues, especially Jewish lawmakers, find those statements anti-Semitic.

“I welcomed any time my colleagues have asked to have a conversation, to learn from them, for them to learn from me,” said Omar. “I think it’s really important for these members to realize that they haven’t been partners in—in justice. They haven’t been equally engaging in seeking justice around the world and I think I will continue to do that. It is important for me as someone who knows what it feels like to experience injustice in ways that many of my colleagues don’t. To be a voice in finding accountability, asking for mechanisms for justice for those who are maligned, oppressed, and have had injustice done to them.”

The insinuation that Jewish Democrats don’t make an effort to fight injustice did not sit well with the Conference of Presidents of Major American Jewish Organizations, which responded Wednesday in a news release.

“We condemn the disgraceful comments made by [Omar] in a CNN interview in which she accused her Jewish congressional colleagues, along with the Jewish people as a whole, of not being committed to the pursuit of justice,” Conference chair Dianne Lob, CEO William Daroff and executive vice chair Malcolm Hoenlein wrote in the release.

They also rejected Omar’s attempts to once more walk back her comments.

“Her tweets this morning with examples of individual Jews and Jewish organizations that she finds noteworthy do not mitigate her bigoted comments. We remain greatly concerned with the pattern of her statements attacking the Jewish people and, specifically, in this case, Jewish members of Congress,” the release stated and cited the late-Supreme Court Justice Ruth Bader Ginsburg’s eloquence in speaking about social justice in Judaism. “Seeking justice is a core tenet of our faith, a tenet sustained throughout 2,000 years as an oppressed, stateless minority and championed since 1948 by the State of Israel.

Omar’s backtracking on Wednesday was accepted by Jewish Democratic Council of America CEO Halie Soifer, who tweeted that she strongly supported Omar’s tweet that said that Jewish and Muslim communities share a commitment to justice and equality.