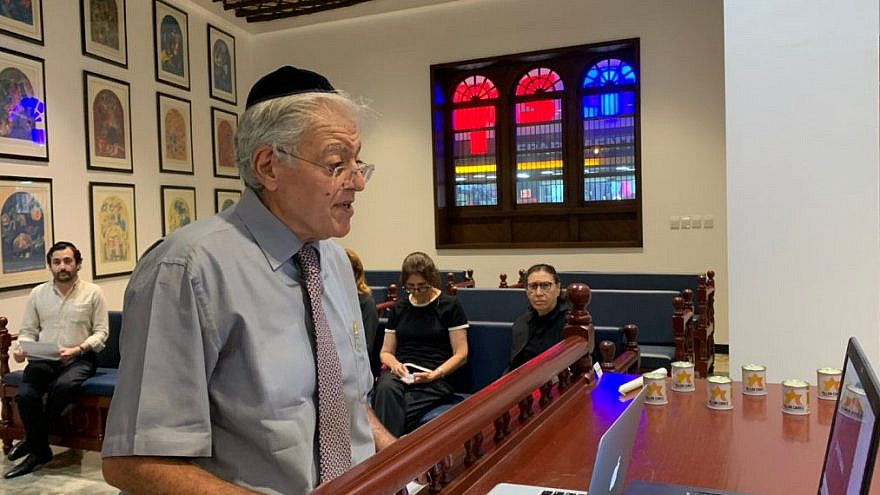 Participants in the the Holocaust Remembrance Day ceremony in Bahrain, April 7, 2021. Credit: Courtesy of Houda Nonoo, Bahrain's former ambassador to the U.S. and a board member of the Association of Gulf Jewish Communities.
Spread the word.
Help JNS grow!
Share now:

(April 8, 2021 / Israel Hayom) The Jewish community in Bahrain marked Holocaust Remembrance Day for the first time in a virtual ceremony initiated by the House of Ten Commandments, said the local Jewish organization.

According to the organization, the ceremony was held at the community synagogue, which was “recently renovated at the king’s initiative.”

Ambassador Houda Nonoo, from a Bahraini Jewish family, who was the kingdom’s ambassador to the United States, initiated the event.

The guest of honor was Dore Gold, president of the Jerusalem Center for Public Affairs, former Israeli Ambassador to the United Nations and former director-general of Israel’s foreign ministry. He met with Nonoo during his visit to Bahrain in December.

At the end of the ceremony, the “El Malei Rachamim” prayer was recited and candles were lit “in memory of the victims as part of the Yellow Candle project #Yellocandle,” the organization said in a statement.

Earlier this week, the planned commemoration events were announced as a sign of the warming relations between Israel and the Gulf states.

Israel, the United Arab Emirates and Bahrain signed the Abraham Accords last fall, paving the way for normalization and already credited with having improved Arab-Jewish relations in the region.

The House of the Ten Commandments of the Jewish community of Bahrain and the Jewish Council of the Emirates said that they would each hold their own separate commemoration events, in addition to that of the AGJC, in which both participated.

“For the first time ever, the Jewish communities of Bahrain and Dubai will be participating in the Yellow Candle Project, the global communal effort to remember victims of the Holocaust, whereby members from each community will light a yellow candle in memory of the name of Jews who perished during the Holocaust,” said the AGJC.