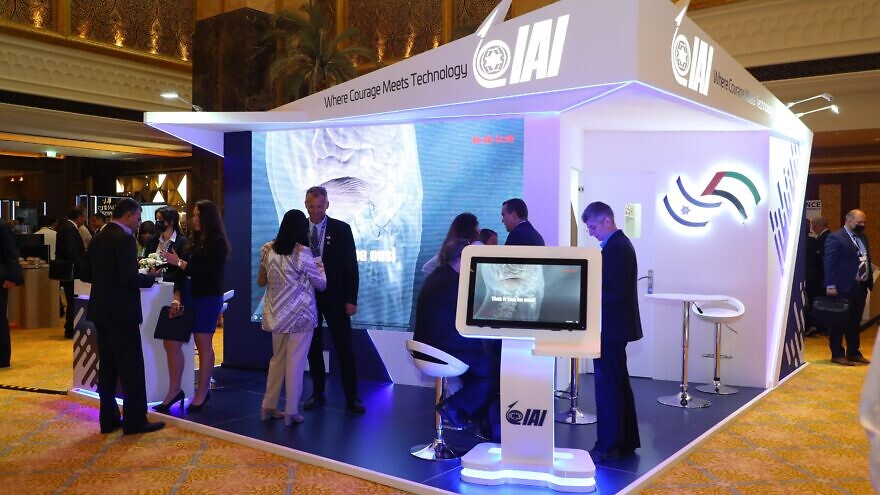 (June 1, 2022 / JNS) For the first time in its company history, the state-owned Israel Aerospace Industries sponsored and played a central role in the United Arab Emirates’ Global Aerospace Summit 2022, which was held in Abu Dhabi from May 24 to 27.

Biton described the summit as a major hub for relevant industries and governments in the aerospace sector. “There are people here from all levels—from maintenance, repair and overall care of engines to chief technology officers that deal with future developments. There are sustainability interests being promoted here, which we are very interested in,” he explained.

As part of the summit, Salem Al Qubaisi, director-general of the UAE Space Agency, discussed his country’s space agency.

The summit, hosted by the Emirati Mubadala Investment Company, was held at the Emirates Palace Hotel and attracted global leaders in aviation, space and defense sectors, including giants such as Boeing.

With the only Israeli company sponsoring the event (a few others arrived as visitors), potential Gulf clients appear interested in IAI’s homeland security and air-defense capabilities.

“The centrality of our role was visible in our booth, which represented how IAI is becoming a strategic partner here, and that is how we are being perceived,” he stated.

“We are here with a very clear message, and that is that our work in the Gulf is not only about providing solutions and products but also to create a dialogue based on a transfer of knowledge and a transfer of technology,” said Biton.

Comparing the Abraham Accords, under which Israel normalized relations in the fall of 2020 with the UAE and Bahrain, as well as with Morocco and Sudan, to a long-distance marathon, Biton said that “our vision here in the Gulf region—and not only here—is that we are here to stay.”

The IAI’s booth received plenty of traffic and leads for follow-ups, he said, and offered the organization’s approach, based on a willingness “to supply cutting-edge technology and solutions tailor-made for our clients,” he added.

“The fact that we can offer cyber solutions was a key feature of our presence. We aim to be world leaders in this field. Here, too, some very interesting meetings were generated with representatives from several countries,” said Biton.

Cyber security for air transportation turned out to be a major area of interest in an age where most aircraft use fly-by-wire computerized flight controls and onboard WiFi, making them more vulnerable to hostile cyber attackers.

“Our company belongs to the Defense Ministry, so blue and white is not only our logo but also our heart. We feel like emissaries of the State of Israel, and that’s how we conducted ourselves,” said Biton. “We managed to add a small step forward in how the State of Israel is received in this region.”

He also took the opportunity to thank the Emirati hosts, describing their hospitality towards Israelis as warm as could be, pointing out that “it’s not just about interests. We’ve received the warmest welcome. I thank them for their incredible hospitality.”