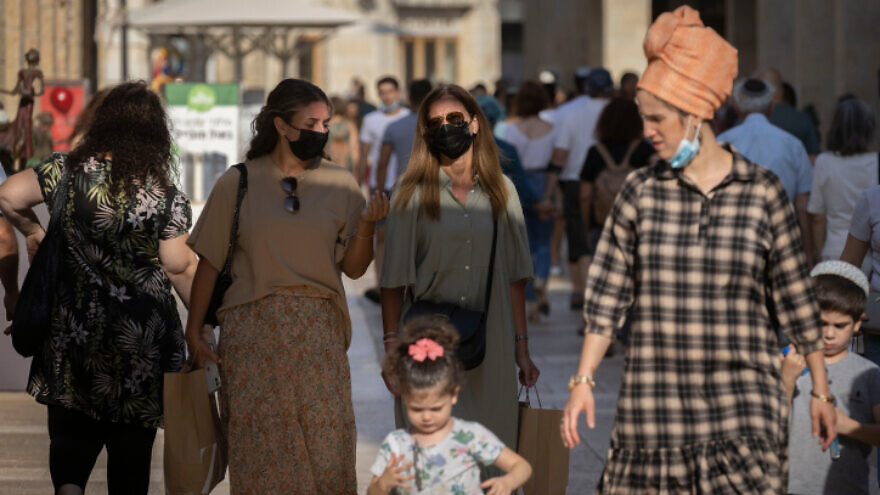 (August 12, 2021 / JNS) In an effort to curb the fourth wave of the pandemic in the country, Israel’s coronavirus Cabinet has approved a series of new restrictions, the Prime Minister’s Office announced on Wednesday.

According to the PMO, the decisions reached by the Ministerial Committee on Fighting the Coronavirus to go into effect next week include the expansion of the “green pass” plan to all sectors of the economy other than malls and places of commerce.

This means that anyone over the age of three will be required to present either proof of vaccination or a negative COVID-19 PCR test result for entry to pools, gyms, academic institutions, sports and cultural events, conferences, museums, libraries, restaurants and hotels.

The state will fund the test for children between the ages of three and 12, the PMO stated. Those over the age of 12 who are unvaccinated by choice will pay for their tests privately.

A “purple pass” system—relating to the number of occupants in a given location—will also be applied to malls and places of commerce, such that only one person per seven square meters (75 sq. ft.) will be permitted to frequent the venue simultaneously, though individual stores larger than 100 square meters (1,076 sq. ft.) will be exempt.

Other new rules include a limit on the number of participants at events in private homes, with no more than 50 people permitted indoors and up to 100 in open spaces.

Mask mandates for outdoor events of more than 100 people are also returning, and the government is calling on those over the age of 60 to avoid gatherings in closed spaces.

Israel is the first country to have begun administering a vaccine booster to its 60-and-over population after the majority of second shots were administered more than six months ago.

Due to the uptick in Delta-variant infection rates, however, the Centers for Disease Control and Prevention on Monday raised its COVID-19 travel alert for Israel to its highest level.