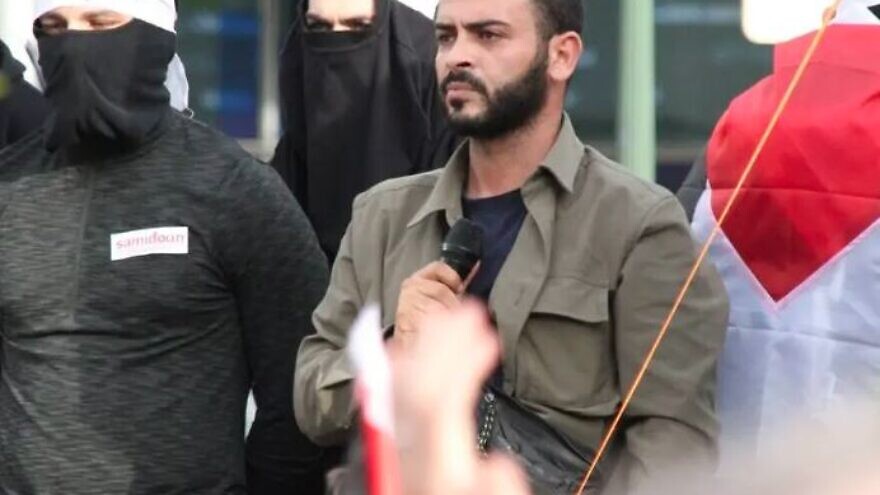 Mohammed Khatib, the E.U. coordinator for the Samidoun Palestinian Prisoner Solidarity Network, calls for the destruction of Israel and the United States at the "March for Return and Liberation" organized in Brussels by Masar Badil, or the Palestinian Alternative Revolutionary Path Movement, Oct. 29, 2022.
Spread the word.
Help JNS grow!
Share now:

(November 6, 2022 / JNS) Not only Israel, but also the United States, Canada and the European Union must be conquered, a top representative of an Israel-designated terror group said at a recent event in Brussels.

He made the comments at a rally outside of the E.U. Parliament during the Oct. 29 “March for Return and Liberation,” planned by the Masar Badil, or Palestinian Alternative Revolutionary Path Movement.

“Defeating Israel means defeating this colonial institution [the E.U. legislature]. It means payback for all Africans … second and third generations [who] are in Brussels. We’ve built this city and we still face fascism and racism. So, we will say no to this not only in Palestine [sic], but here in Europe, there in the United States and in all Arab countries,” Khatib added.

According to Samidoun’s website, the march had numerous clear principles, including the demand for “the liberation of Palestine from the [Jordan] River to the [Mediterranean] Sea and the right to return [to Israel] of all Palestinians.”

Samidoun was designated by Israel as a terrorist organization due to its ties to the Popular Front for the Liberation of Palestine, whose members founded it in 2012.